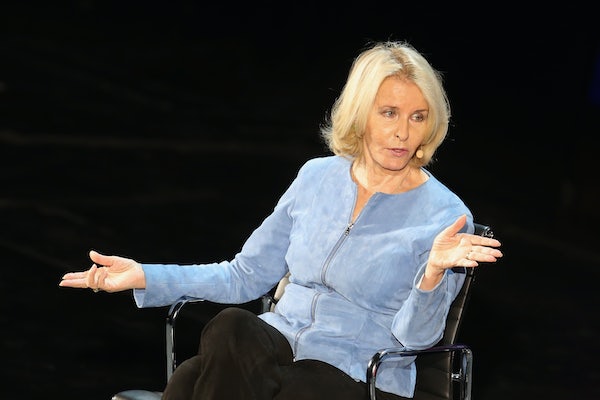 On Monday night, a Washington fixture met the woman at the center of one of the Trump era’s most salacious scandals when Sally Quinn hosted an event at Politics and Prose bookstore in D.C. to promote Stormy Daniels’s Full Disclosure. BuzzFeed News reporter Lissandra Villa described it as a packed event that drew an audience of 200 guests, creating a “toasty” room where at least one person seems to have fainted.

Daniels was the star attraction, given her legal struggles against her alleged one-time lover, President Donald Trump. But Quinn was an equally interesting choice as a host. Quinn, who currently blogs on religion, has been important as both a writer and a social figure, a hostess whose social gatherings are the center of Washington community life.

It was as the voice of the Washington establishment that Quinn penned a famous 1998 column condemning Bill Clinton for the Monica Lewinsky scandal.

“When Establishment Washingtonians of all persuasions gather to support their own, they are not unlike any other small community in the country,” Quinn wrote in The Washington Post. She added, “With some exceptions, the Washington Establishment is outraged by the president’s behavior in the Monica Lewinsky scandal. The polls show that a majority of Americans do not share that outrage. Around the nation, people are disgusted but want to move on; in Washington, despite Clinton’s gains with the budget and the Mideast peace talks, people want some formal acknowledgment that the president’s behavior has been unacceptable.”

All in all, the audience seems to have been engaged with an illuminating evening, not least for showing the shifting ways Washington responds to sex scandals.