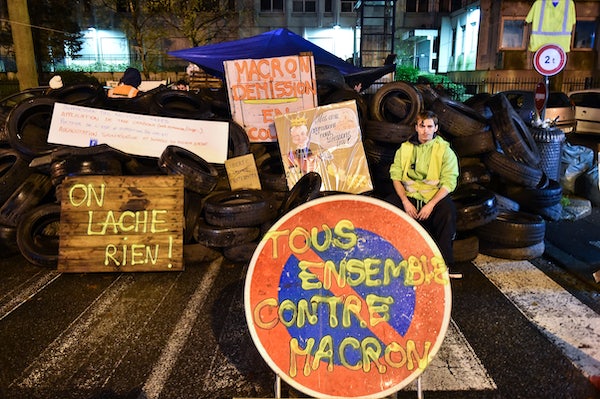 French government suspends carbon tax in the face of protests.

On Tuesday, French Prime Minister Édouard Philippe announced that his government was temporarily suspending a controversial tax on gas designed to curb carbon emissions. He did so after weeks of violent protests had wracked France. “No tax is worth putting in danger the unity of the nation,” Philippe said. The suspension will last six months.

The suspension of the tax is a major setback to French President Emmanuel Macron who had made the carbon tax a central part of his agenda. The protests have threatened not just the tax but the social cohesion of France. As The Washington Post reports, “For the better part of three weeks, protesters in France—clad in high-visibility yellow vests—took to the streets across the country. In Paris especially, the scenes were particularly violent, with demonstrators defacing monuments, torching cars and smashing shop windows. The government went so far as to weigh the possibility of imposing a ‘state of emergency to quell the unrest.’”

Writing in The Washington Post, Ishaan Tharoor placed Macron’s difficulties in the context of larger divisions in contemporary democracies. “The cracks that are widening in France—and the postindustrial despair entrenched in the provinces—would seem familiar to Americans, Britons and others in Western democracies,” he writes. “So, too, would the inability of politicians to bridge the divides. Beyond the gasoline tax, Macron has struggled to push through an ambitious slate of reforms he claims will unshackle the French economy. There is widespread resentment about his highhanded governing style and the lingering impression that he is running the country in the interests of a comfortable metropolitan elite.”