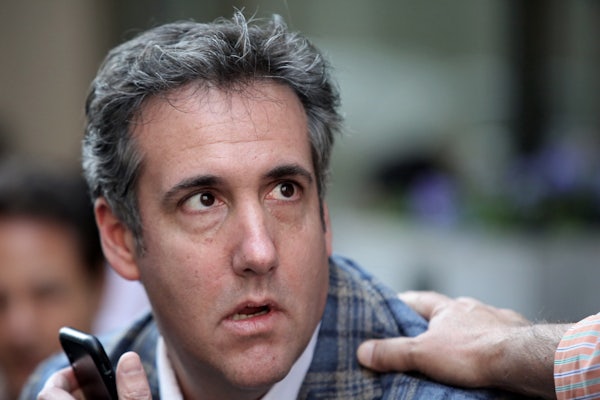 Federal prosecutors recommend “substantial” jail time for Michael Cohen despite his cooperation with the Russia investigation.

The U.S. attorney’s office in Manhattan told a federal court on Friday that President Donald Trump’s former legal counsel should receive a “substantial term of imprisonment” after he pleaded guilty to charges related to tax evasion, fraud, and campaign-finance violations in August. But in a separate filing, special counsel Robert Mueller praised Cohen’s cooperation with his own office’s investigation and recommended leniency.

Cohen previously told the court that he cooperated with the investigations out of a sense of “personal resolve.” But federal prosecutors disputed that characterization, noting that Cohen only reached out to the special counsel’s office in August when he realized he was about to be indicted by the Manhattan office. “As such, any suggestion by Cohen that his meetings with law enforcement reflect a selfless and unprompted about-face are overstated,” the Manhattan office told the court. They recommended that he serve roughly three-and-a-half years in prison.

Two of the offenses to which Cohen pleaded guilty involved hush-money payments aimed at suppressing accounts of Trump’s extramarital affairs with two women. Those payments, prosecutors said, violated federal campaign-finance laws by exceeding donation limits. The Manhattan office directly linked those payments to the president in Friday’s filing, telling the court that Cohen “acted in coordination with and at the direction of Individual-1,” the prosecutors’ pseudonym for Trump. (Cohen himself made a similar assertion during his plea hearing in August.)

The special counsel’s office, on the other hand, offered a more laudatory account of Cohen’s cooperation with the Russia investigation. Cohen pleaded guilty last month to lying to Congress about his role in negotiating Russian real-estate deals for the Trump Organization during the 2016 campaign. Mueller told the court on Friday that Cohen had taken “significant steps to mitigate his criminal conduct” and provided “credible and consistent information” to investigators over the course of seven meetings.

Mueller offered few clues about what the president’s former lawyer offered in the Russia investigation. Friday’s filing asserted that Cohen gave “useful information concerning certain discrete Russia-related matters core to its investigation that he obtained by virtue of his regular contact with Company executives during the campaign.” The special counsel’s office also said that Cohen “provided relevant and useful information concerning his contacts with persons connected to the White House during the 2017–2018 time period.”

Those vague descriptions may prompt a wave of unease among members of Trump’s inner circle, many of whom have already given their version of events to federal investigators and congressional committees. Among those under the most intense scrutiny is Donald Trump Jr., a high-ranking Trump organization executive. California Representative Jackie Speier, a Democratic member of the House Intelligence Committee, told reporters on Friday that she believed the president’s son may have lied to Congress twice about Russia-related matters. She did not specify what she believes he lied about.