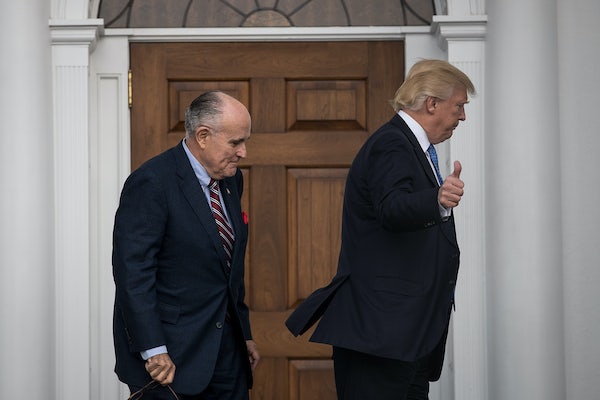 President Donald Trump’s lawyer strangely combined belligerence with concessions when he was interviewed on Sunday by George Stephanopoulos for ABC’s This Week. While Giuliani made passionate arguments on behalf of the president, he also seemed to acknowledge major wrongdoing.

At one point, Giuliani attacked Michael Cohen, the president’s former lawyer, for being disloyal:

Giuliani:  It shows all I’m thinking about is me, my own skin. And the Southern District says you can get out of jail if you do this, you’ve got three years now. There’s a real motivation to sing like crazy. He’s got to do a lot of singing to get out of the three years and he will say whatever he has to say. He’s changed his story four or five times.

Stephanopoulos: So has the president.

Giuliani: The president’s not under oath.

In this exchange, Giuliani manages to both echo gangster talk (“motivation to sing like crazy”) and also admit the president has lied about the payments that Cohen made to two women with whom Trump allegedly had affairs.

Giuliani also shifted the goalpost on the issue of whether longtime Trump crony Roger Stone provided then-candidate Trump with information about Wikileaks.

Stephanopoulos: And did Roger Stone ever give the president a heads-up on WikiLeaks’ leaks -- leaks concerning Hillary Clinton, the DNC?

Giuliani: No, he didn’t.

Stephanopoulos: Not at all?

Giuliani: No. I don’t believe so. But again, if Roger Stone gave anybody a heads-up about WikiLeaks’ leaks, that’s not a crime. It would be like giving him a heads-up that the Times is going to print something. One the -- the crime -- this is why this thing is so weird, strange -- the crime is conspiracy to hack; collusion is not a crime, it doesn’t exist.

It’s striking that Giuliani quickly moves from outright denial (“No, he didn’t.”) to a much softer claim of no knowledge (“No. I don’t believe so.”).

As Jonathan Chait notes in New York, the oft-repeated refrain “collusion is not a crime” is a bit of misdirection. “The Trumpian mantra, ‘collusion is not a crime,’ is a misleading legalism,” Chait observes. “Think of ‘collusion’ and ‘crimes’ as two large circles in a Venn diagram with a small overlap. Trump is being investigated for many crimes, and his campaign obviously colluded with Russia in multiple ways. Some of the alleged crimes, the overlapping portion of the Venn diagram, involve cooperating with the Russian election intervention.”