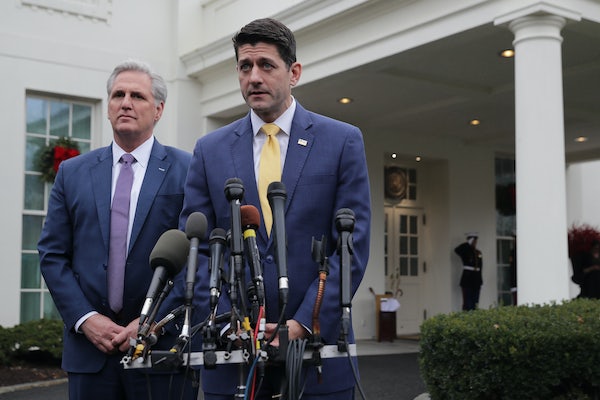 Partial government shutdown looms as Trump refuses to budge on the border wall.

Attempts to avert a year-end partial shutdown of the government are in shambles after the president told congressional leaders that he won’t sign a stopgap resolution because it doesn’t address his agenda of funding the border wall.

“House Speaker Paul Ryan says after leaving a meeting with Trump at the White House that he and other leaders are going to go back to Capitol Hill to ‘work on adding border security’ to the legislation,” The Washington Post reports. “Trump is facing a backlash from conservative supporters who’ve urging to him to stick with an earlier pledge to force a shutdown in hopes of securing money for his long-promised border wall.”

Politico speculates that a possible scenario might run like this: “[T]he GOP is going to put $5 billion in the stopgap somehow. That might or might not pass the House—attendance is down big time, with 52 people missing the last vote this morning. If the bill does clear the House, it will go to the Senate, where it will not go anywhere. Then there will be a choice: Enough Republicans get on board with Democrats to pass the stopgap, or keep the government shut down until Jan. 3, when Nancy Pelosi will be able to open it up.”