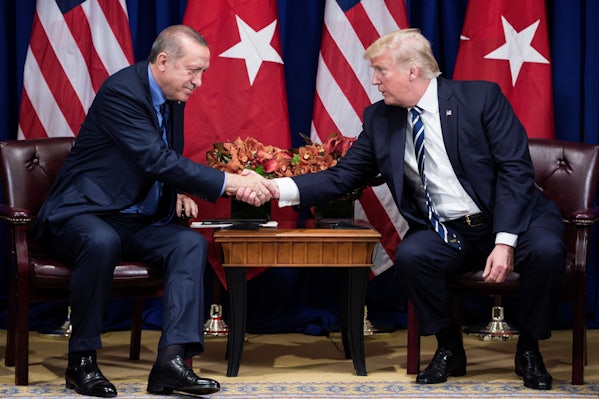 Turkish president was shocked that Trump went along with demand for Syrian withdrawal.

The Associated Press is reporting that President Donald Trump’s decision to withdraw troops from Syria crystallized during a December 14 phone call with Turkish President Recep Tayyip Erdogan. According to the news agency, the decision was “made hastily, without consulting his national security team or allies, and over strong objections from virtually everyone involved in the fight against the Islamic State group, according to U.S. and Turkish officials.”

One of the surprising details of the report is that Erdogan himself was taken aback at how successful he was in convincing Trump on the Syrian matter. Before the phone call, the consensus position that the Trump administration had reached, backed by Secretary of State Mike Pompeo and Secretary of Defense Jim Mattis, was that Trump would tell Erdogan to back off from his threats to attack Kurdish forces in Syria.

But during the phone conversation, Trump threw away the script and agreed with his Turkish counterpart. As AP relates, Trump started by reiterating the message of backing off. But then a change occurred:

Erdogan, though, quickly put Trump on the defensive, reminding him that he had repeatedly said the only reason for U.S. troops to be in Syria was to defeat the Islamic State and that the group had been 99 percent defeated. “Why are you still there?” the second official said Erdogan asked Trump, telling him that the Turks could deal with the remaining IS militants.

Trump then posed Erdogan’s question to his National Security Advisor John Bolton, who was participating in the phone call. Bolton admitted that the Islamic State had indeed lost 99 per cent of its territory but said that it was in America’s interest to make sure the group did not enjoy a resurgence.

Trump was not dissuaded, according to the officials, who said the president quickly capitulated by pledging to withdraw, shocking both Bolton and Erdogan.

Caught off guard, Erdogan cautioned Trump against a hasty withdrawal, according to one official. While Turkey has made incursions into Syria in the past, it does not have the necessary forces mobilized on the border to move in and hold the large swaths of northeastern Syria where U.S. troops are positioned, the official said.

From this reporting, it seems likely that it was never Erdogan’s intention to get the United States to withdraw. Rather he made the demand as a bargaining move, to get other, lesser goals. Trump, displaying his mastery of the art of the deal, gave in to Erdogan’s maximum position.

The White House denies the accuracy of AP’s account.