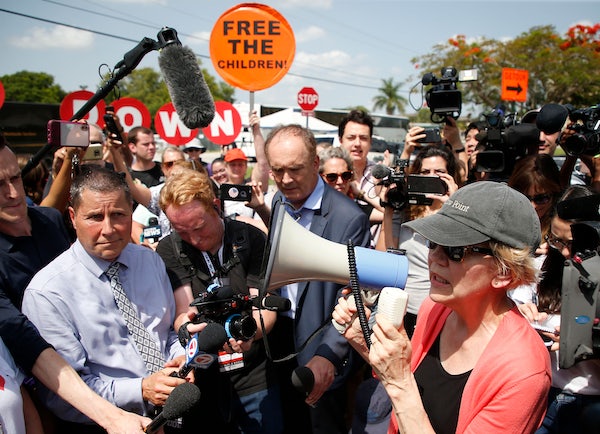 Is cruelty a winner?

As the Democrats take the stage for the first debate, I am expecting—hoping, even—that there will be ample outrage over the warehousing of migrant children at the southern border.

The last week or so has seen an uptick in attention—because of the brutality at the Clint facility, because of the drowning deaths in the Rio Grande—on what has been the shame of a nation for most of the Trump administration. Several presidential candidates in Miami will be making the short trip to Homestead, a for-profit shelter for unaccompanied minors. The facility was, it must be said, first opened under Obama, but it was re-opened and doubled in size by Trump to cage hundreds of migrants in their teens.

Today, Elizabeth Warren and Amy Klobuchar made separate visits there. Neither were allowed inside, but Warren stood on a step ladder and peered over the fence at what she said were kids being marched in lines. She turned to the assemblage of media and supporters and called it “a moral stain inflicted by Donald Trump.”

“Following a policy that can be boiled down to one basic idea—and that is maximizing the pain inflicted on families who flee to the United States to try to build some security and safety in their lives—is fundamentally and morally wrong.”

Warren’s right, of course, and it is refreshing to hear strong condemnations from one of the Dem frontrunners. But then I thought, is that going to matter?

Adam Serwer famously wrote last October that “the cruelty is the point,” that the through line that connects what seems like a chaotic carnival of policy misfires is the joy at inflicting pain on people Trump and his fans see as “other.” That premise has become almost universally accepted by those opposed to this administration and the Republican Party that embraces it—and so, it is likely that many in Miami will try to score points by voicing righteous and rightful outrage at the serial meanness of Team Trump. But is that outrage a winner for the campaign trail?

This question applies to both the primaries—where every Democrat will hopefully be vocally opposed to the Zero Tolerance “policy”—and the general, where the issue energizes the GOP while seeming to enervate Democrats. The last thing you want to do is exhaust your base, after all.

But beyond that: Does Trump’s cruelty engender a real feeling of powerlessness? Is opposing cruelty basically negative campaigning—campaigning without hope, when your best advisers will tell you to close with hope?