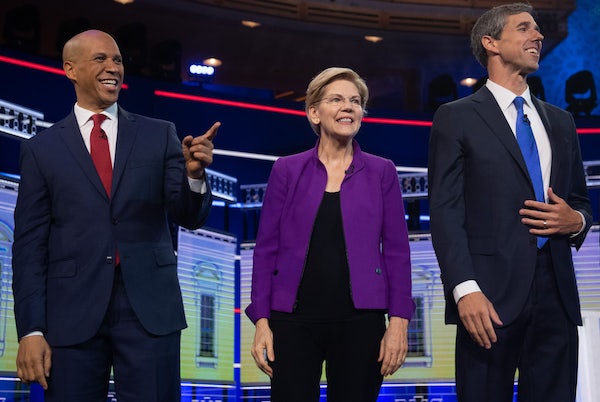 This debate is taking place on Earth 2.

In the first hour of the first Democratic debate, the seemingly infinite number of Democratic presidential candidates on stage covered a lot of ground. They talked immigration and Iran, climate change and antitrust and gun control. Without ever really addressing it, they showed just how far the Democratic Party had shifted to the left over the past decade, with a public option now clearly emerging as the centrist position in health care. They even spoke in two languages!

One thing they didn’t really talk about—at least not directly—was President Trump. He was subtext, always, particularly on immigration and the possibility of war with Iran. But for the most part, his belligerence and incoherence was treated as a point of fact, rather than an unprecedented horror show.

It’s not hard to see who stands to gain from pointedly avoiding Trump on the debate stage. The party’s leadership wants to avoid impeachment proceedings at all costs, and they succeeded in the midterm elections in part because they focused so single-mindedly on issues like health care, rather than the daily barrage of tweets and scandals emanating from the White House.

But there’s also a sense that this debate is taking place in a parallel universe. Trump’s presence in the White House is a major catalyst for many of these crises, but the Democratic candidates thus far have largely avoided confronting it directly. The reluctance to speak his name feels almost mystical, as if saying it will summon his presence—or at least a tweet.