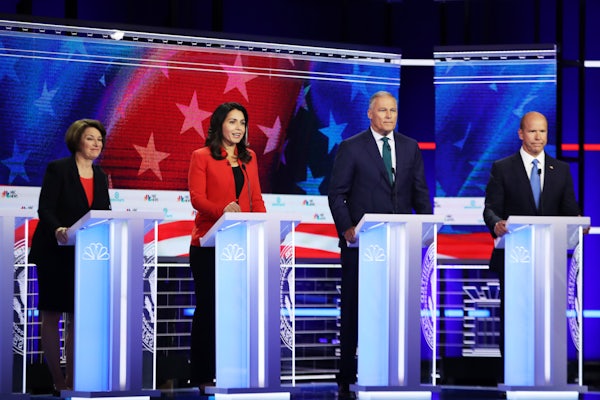 Isn’t it time for NBC to get a less peppy debate tune?

Heading into the second Democratic debate tonight, many are hoping for more climate talk and fewer non sequiturs. Personally, I’m dreading the music, which will almost certainly be the same as last night’s. Sure, it’s a minor matter—an aesthetic detail of short duration. Still. It’d be nice, particularly this year, if NBC would ditch its usual fanfare for something a little more understated. The Olympics-meets-Indiana Jones intro soundtrack feels too flashy, too entertainment-oriented for the present moment—more suited to something people watch with popcorn and a beer, rather than a knitted brow and a bottle of Xanax.

Like the Democratic candidates gamely discussing tax brackets and health care last night while ignoring this unprecedentedly erratic presidency, blaring something that sounds like it was written up by Erich Wolfgang Korngold for an Erroll Flynn movie right before we’re about to hear about drowned immigrant children abrades the senses (and the morals) a bit. There’s something a little Hunger Games about the aesthetic: signaling spectacle and entertainment in the face of a political climate that’s actually disturbing.

While we’re on the subject, as a few folks asked on Twitter last night: Why are these debates still taking place in front of live audiences? Isn’t it time to cut the whoops and claps, letting the candidates discuss their proposals like the world-shifting policies they are? Do we really still need sound effects like a ‘90s sitcom?