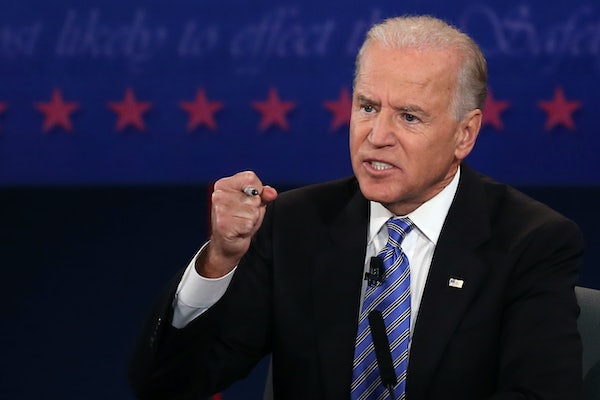 Will anyone be brave enough to try to take down Joe Biden?

Or should that be stupid enough?

The first Democratic debate was notable for the absence of two pronouns: Donald Trump, the man who the eventual nominee will take on next year, and Joe Biden, the current Democratic frontrunner. Trump was, of course, impossible not to mention, but was avoided whenever possible. Biden, however, never came up at all.

He wasn’t on the stage then, however. He will be tonight. The perception among many—myself included—is that Biden’s support is soft, and that voters only need to be reminded of his sizable baggage, his somewhat creepy persona, and his penchant for saying dumb stuff to flock to a different candidate. Given that he’s already made two sizable gaffes, on abortion and race, there is plenty for the other nine Democratic candidates to take on.

But it might not be worth it. Going after Biden might be a disaster if a candidate is polling in the low single digits. Recall Chris Christie’s entertaining dressing down of a robotic Marco Rubio in a February 2016 debate. Rubio limped on afterwards, but never regained the glow of a potential challenger for the throne. Christie, meanwhile, didn’t see a boost for his own candidacy. It was, as my former colleague Elspeth Reeve wrote at the time, something akin to a political murder-suicide.

One crucial difference: That took place in February of 2016. The Iowa caucuses had already taken place. We’re more than six months away from an election. Candidates right now have an incentive to play nice. Of course, if Biden stays in the lead, he could end up cementing his status. That is, unless someone is crazy enough to take him on.