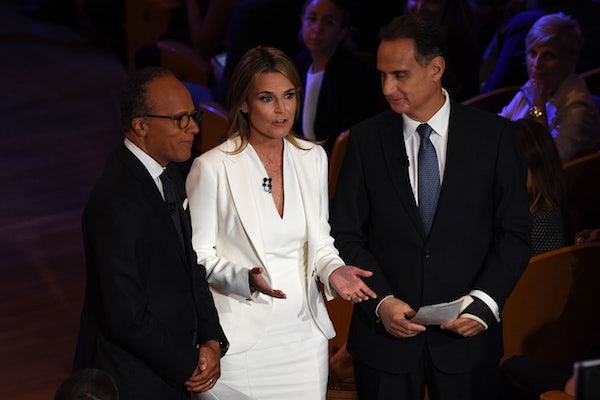 The debate moderators are addicted to right-wing talking points.

Chuck Todd predictably emerged as one of the villains of the first debate, derailing a decent policy discussion with a seemingly endless barrage of right-wing talking points. He, for instance, asked the candidates not about gun control, but to speak to Republican fears about gun confiscation. He asked Julián Castro if his immigration reform plan amounted to “open borders.” The charitable reading of this strategy was that he wanted Democrats to speak to swing voters. But it’s June in the year before the election. They don’t need to persuade skeptical voters, they need to explain their policies. His line of questioning didn’t do that and it basically ruined what was otherwise a fine opening debate.

Unfortunately, the second debate has largely revolved around the kinds of GOP talking points that Todd is addicted to. The debate opened with Bernie Sanders being asked how he would pay for Medicare for All. How we would pay for policies like Medicare for All has been the focus of much of the moderators’ attention, not explaining what those policies would actually do. At the same time, they’re pumping up candidates like Michael Bennet and John Hickenlooper, who have been the most aggressive critics of the Democrats’ turn toward “socialism.”

This is partly a result of how the two debates were drawn. Wednesday’s was (accidentally) the kids’ table debate, and the moderators asked questions about policy. Now they want them to fight, but not about their substantive differences. They want them to fight in cable news-ready soundbites. And it’s going to get worse—Chuck Todd will be on soon.