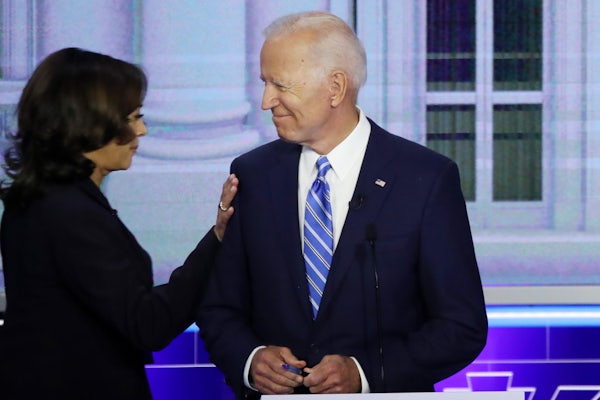 Biden had a clear strategy and it worked for most of this debate. He came in deciding to act like a frontrunner, using weasel words on tough questions about immigration and health care, and largely staying out of the fray. The other candidates could spar about ideology and policy, but Biden reminded people again and again that he worked with Barack Obama. He continuously reminded the moderators that he was out of time, a sign that he—unlike most of the other people on the stage—had something to lose by speaking, not something to gain. Whenever the moderators asked the candidates to raise their hands in response to a question, Biden did a strange thing with his hand—holding it out, instead of raising it, acting like he had something to say without necessarily agreeing or disagreeing to what was asked.

That changed when Kamala Harris pivoted a discussion about Pete Buttigieg’s response to a recent police shooting in South Bend to Joe Biden’s record on busing, race, and civil rights.

“I do not believe you are a racist,” she said. But “it was hurtful to hear you talk about the reputations of two US senators who built their reputations and career on segregation of race in this country.... You also worked with them to oppose busing.”

Biden was definitely prepared to defend his recent comments praising two notorious segregationists he worked with in the Senate in the 1970s. But he wasn’t prepared for Harris’s all out assault on his record as one of the staunchest opponents of court-ordered school busing during the same period. That record undercuts Biden’s defense of working with segregationists—that he did it to pass civil rights legislation—and makes it clear that he was actively part of propping up the opposition to integration.

Biden couldn’t have responded in a worse way, bungling his answer by not only defending busing but making a states-rights argument. But it also drew a line between Biden on both generational and racial lines. Biden keeps turning the conversation back to his time working with Barack Obama, but he clearly can’t defend his record as a senator in the same way. Harris found his Achilles heel.