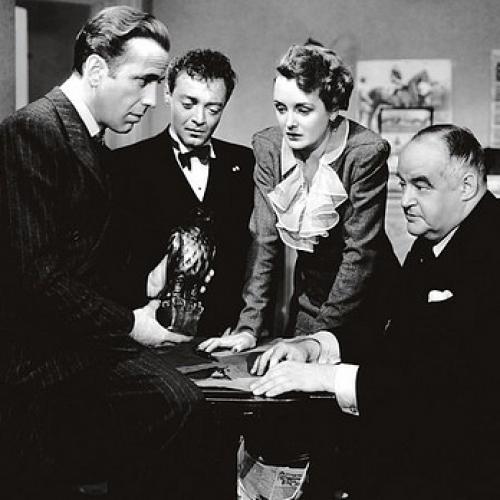 The Maltese Falcon is the first crime melodrama with finish, speed and bang to come along in what seems ages, and since its pattern is one of the best things Hollywood does, we have been missing it. It is the old Dashiell Hammett book, written back in the days when you could turn out a story and leave it at that, without any characters joining the army, fleeing as refugees or reforming bad boys, men or women. It is hokum, all right—about a historic image so costly with gold and jewels that people follow it all over the world, plotting to get it away from other people similarly employed, the various forces finally converging in the territory of Sam Spade, a detective. But John Huston has written the screen play and directed the picture so that a fast pace and direct, vigorous approach give a surface meaning to each situation as it follows another.

The story is one of the few cases where they have their cake and eat it too, for the detective is in love with the mystery woman, and she might turn out in the end to be another case of (a) innocence wronged, (b) the most trusted agent of the United States Government. But she doesn’t, and he sends her up for twenty years. There is bound to be a little confusion in this, for an audience likes to know where it stands, and neither Mary Astor’s lines nor her abilities above them quite get over the difficulty of seeming black and then seeming white, and being both all along.

Scene by scene, the picture has many, good services—first of all those of the director, who has a genuine sense of suggestion and picture motion. Peter Lorre is never dull though much too often typed. There are Ward Bond, Barton MacLane, Gladys George and Jerome Cowan, but the key man in the supporting cast is Sydney Greenstreet, who does a marvelous and veteran creation, solid in the center of each scene, as the genial and menacing fat man. There is character in the picture and this, as well as the swift succession of its contrived excitements and very shrewd dialogue, is what gives the temporary but sufficient meaning required by its violent fantasy.

And outside of the writer-director, the chief character influence in the story is Humphrey Bogart, a man of explosive action in an iron mask. He is not a villain here, though a pretty hard type; but it doesn't make any difference: he has some of that magnetism you can feel through the screen; he is a villain with appeal. He has a good part here, a steady outlet for that authority and decision and hard level talk of his. But he fills it without trying and you’re with him.