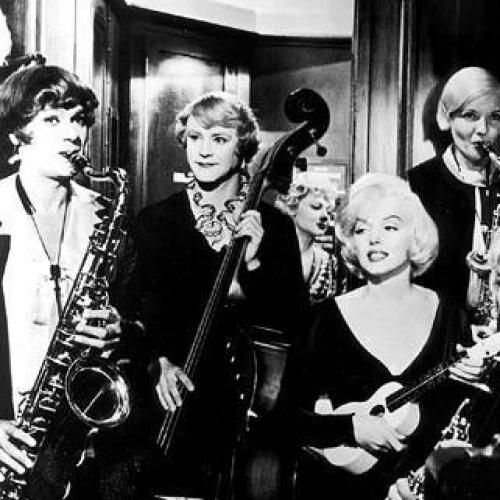 Between an audience and a good film a certain confidence is quickly established. This is especially true of comedies. The first two or three minutes are enough to tell you whether a comic film is going to be a dud; the first eight or ten minutes are enough to establish this confidence. In it the audience implies: “We recognize that we are in good hands. Take over.” In addition to the fun the picture provides, there is an extra pleasure in having found a good film and knowing it while you’re enjoying it. It is staggering to contemplate how many millions of people around the world are going to feel that way about Some Like It Hot. This new Marilyn Monroe—Jack Lemmon—Tony Curtis film is a lulu.

In terms of comic devices there is very little in the film that is original, but the use of the material is delightful. In Chicago, 1929, Lemmon and Curtis are indigent musicians who accidentally witness the St. Valentine’s Day Massacre. The gang searches for them to kill them, and they don’t even have the money to get out of town. In desperation they borrow wigs and women’s clothes and, in disguise, take jobs with an all-girl band going to Florida. The singer with the band is Miss Monroe, Their male reactions to her, while frantically trying to remain disguised, and other males’ reactions to them in female clothes, constitute the nub of the plot.

Lately, in the wave of sentimentality that always seems to follow success, much has been written to the effect that Miss Monroe is not merely attractive but also has gifts as a comedienne. She has few. She is not nearly as good an actress, for instance, as her Continental counterpart, Miss Bardot; she lacks the French girl’s voice, verve, moderate technical proficiency, and certainly lacks her range. But by now Miss Monroe and her advisers have learned where her strengths lie, and this role is superbly designed to conceal the weaknesses and display the strengths—physical and personal. One aspect of her superiority over such pneumatic dummies as Jayne Mansfield, Anita Ekberg, and Diana Dors is that she has learned not to take sex seriously. As a performer she kids sex; and as a character, in this film, she is so humble about her attractiveness that her effect is equal parts sexual and endearing. It is rumpled, unpretentious, good-hearted sex.

Jack Lemmon is easily one of the most accomplished American actors of his generation. From his first films he has demonstrated technical and temperamental gifts for comedy that are extraordinary; in several recent TV appearances he has shown his ability at the dramatic. His deft, hilariously agonized performance here sets the tone for the picture. In the colloquial vein, and perhaps in others, Lemmon’s future should prove interesting in the extreme.

Tony Curtis has neither the innate endowment nor, as yet, the acquired skill of Lemmon, but he has improved so enormously since his first appearance that the very fact of his improvement seems to compensate for the difference between the two men. The Sweet Smell of Success, The Defiant Ones, and this film represent a growth of which Curtis can be proud and to which audiences are responding.

However its three stars would probably agree that this picture owes its continuous bubble to Billy Wilder, who collaborated on the script, produced and directed. With easy mastery, he has captured much of the scuttling, broad, vaguely surrealist feeling of the best silent comedies. Let dullards deplore the fact that Wilder’s ability is lavished on trivia. No one claims that pleasure is, in itself, the highest aim of comedy, but are there many people with such an abundance of completely pleasant hours in their lives that they can afford to bypass these two?