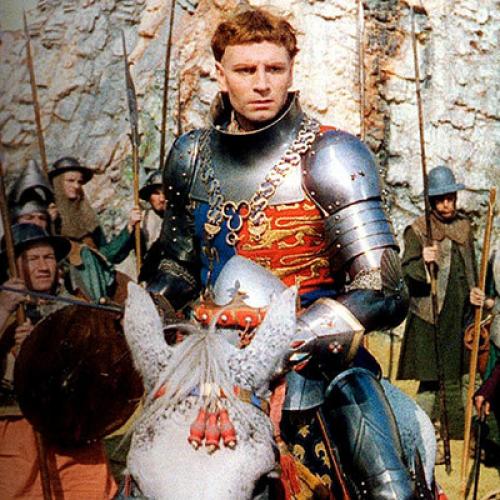 Laurence Olivier’s spectacle-film, Henry V, is a sparkling armor-and-woolen-goods movie about a glorious English leader (Olivier), his smashing, upset victory over the French (who had too much armor, too few archers) in 1415, and his lightning courtship—made up of tricky, beautiful talk and vaudeville—of the French princess Katherine (Renée Asherson). Henry V is a great deal more than almost any other hell-bent-for-armor movie that you’ve seen. While definitely athletic, pageant-minded and somewhat recognizable after all of the war dramas that have come out since Elizabethan times, no movie has given a more poignant impression of men in battle or been so cutting about the waste and folly of war.

Its most artistic value rests in the perfection of the portrait of a great medieval leader-type, the kind of power-happy, wily statesman who terrifies people today more than the thought of a subway ride on a hot day. Olivier does an elaborate, wonderful job on Henry. He sends chills down your back as he smiles at an insult; he makes you uneasy, talking in a charming, bland way of how necessary it is that there be just reason for conquering France. When he turns up here and there in battle to pep up his soldiers, you feel that even Joan of Arc couldn’t have been so noble and inspiring, but that he is something of a busybody. His transformation during the war into a deeper, greater person is made intensely evident in an almost magical way. Olivier’s real feat, though, is in having directed a film that is always as exciting, sometimes more so, than the Shakespeare play. It is basically a word film—every move, of the direction is governed by the desire to do the best job possible by Shakespeare’s lines. I am sure no one is going to do a better Shakespeare movie of this kind.

The schoolroomish opening (a pokey bird’s-eye view of seventeenth-century London and a busy trafficking through a first-act performance of “Henry V” at Shakespeare’s Globe Theatre) gives immediate indication of what a knockout this movie will be—poetic, stunning, exquisitely synchronized, fanciful, light and airy in the best Disney but gentle, unpretentious, down to your level. The opening shot of a program swirling airily up to the screen is the tip-off that this is going to be different from all the other Shakespeare films you’ve seen—breezier and with better scenic effects. The technicolor goes down easily, for once, because the backgrounds are colored in a low, almost natural key and only central figures are occasionally larded with the heavy splashes that you’re used to. The irrepressible wit of Olivier’s directing shows up in a first wonderful close-up as he is about to walk on the Globe’s stage as Henry—it catches him in a look that is a mixture of fear and respect for the audience, the overworked, bored professional: all in all a very unkingly sight. The costuming of the Chorus (floridly and charmingly played by Leslie Banks) is of a sensible kind that accents rather than hides his skinniness, by sack pants and gigantic white garters.

Olivier’s production, though, was aimed to entertain if it had to kill you with charm, to make you understand Shakespeare’s thought if it meant interpreting characters and ideas so well that you get them without half trying, reading the best lines with such care that you feel they’re being slyly pressed into your brain to take home with you and chew on till the end of time. But the greatest letdown comes from the realization that so much of it is like what you find in boys’ books, the American Boy, Disney movies, the action stories on boxes of Wheaties, the paintings of Rockwell Kent or Grant Wood. The puppetlike Dresden-doll princess would turn up in boys’ magazines; so would the quaint comedy and the embarrassing people involved in it, the youthful action backstage and in the galleries at the Globe, and so many of the saccharine landscapes. You get a big dose of the boys’-magazine spirit when the Globe audience is heard derisively responding to one of the speeches about Falstaff. They are being considered quaint, made to sound youthful, and you feel you’re being too carefully instructed about the likes and dislikes of an Elizabethan audience. Henry V—because Olivier was so concerned with entertaining on a light plane (a good part of every scene is woven into expert vaudeville), and especially with pleasing middle-brow taste—always looks a bit contrived (stagy and toylike), boyish, and heavy with décor and costuming the way a grade-school operetta is.