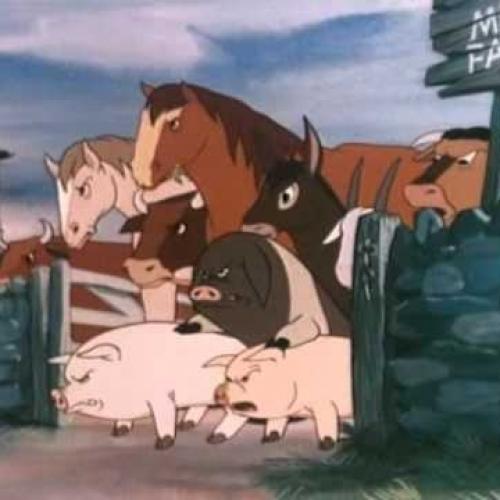 It is a serious pity that one can only praise the film version of George Orwell’s Animal Farm as a valuable beginning or experiment, and hardly more than that. For the project, under the sponsorship of Louis de Rochemont, was clearly given the benefit of a great deal of intelligence, devotion and skill, to say almost nothing of the amount of money involved. The reviews in the daily newspaper have already pronounced the damnation of faint praise upon the film with a genuine kindness which will serve no purpose and certainly will not help at the box office. One can only hope that Mr. de Rochemont, and others of like mind and intention, will not draw premature and discouraging conclusions on the basis of one effort. For despite Disney, the medium of the animated film is largely a terra incognita in which an enormous number of possibilities wait to be discovered, unearthed or invented. The heights and depths of these possibilities will be recognized as soon as one remembers the rich actuality of the literary masterpieces which virtually plead for the vivid translation of visual animation. Everyone will think of Gulliver’s Travels; but there is a great deal else, beginning with the inexhaustible El Dorado of the great folklores and mythologies and concluding with certain of Kafka’s best stories and some of the most inspired passages in Finnegans Wake. There is also the more distant and difficult possibility, which the makers of the film of Animal Farm have previously attempted, of using the animated film for visual versions of some kinds of lyric poetry; the most valuable augmentation, interpretation and orchestration seems possible, a veritable new dimension in which the folk ballad becomes a little opera.

The animated film of Animal Farm, considered in itself and apart from its close connection with Orwell’s text, mostly lacks that characteristic verve and brio which is the most enchanting immediate quality of film cartoons at their best. The resources of style and stylization which Disney drew upon in his best films—in the Silly Symphonies perhaps most of all—are present in the film of Animal Farm only briefly and erratically in a few passages.

The essential dynamism of the animated film (which apparently requires, of necessity, the framework and support of a musical score) has its source in the ancient supernaturalism or magic realism which is at the heart of all poetry: metaphor and metamorphosis, metaphor and miracle, transition as transformation, incident as epiphany, action as advent must continually occur and emerge as if the universe were being created anew, a fact which may have made Disney attempt to depict the first morning of the world in one of his most ambitious, unfortunate undertakings. In Disney, as in all masters of the film cartoon, a locomotive lunches on railroad tracks like celery, a dog’s ears revolve like electric fans, automobiles waltz, tango and do the Charleston, pigs play the piano, roosters chant Wagner, dogs skate on ice rinks, trees applaud and boo, curtsey and snicker. However this be formulated, as metaphor, miracle or Ovidean metamorphosis, the crucial process, which the medium itself demands, is the delightful, triumphant transcendence of the laws of nature and the probabilities of experience; the film cartoon must be a supernatural ballet. Yet there is only one moment in Animal Farm when anything of the sort occurs, the point, towards the end, at which the faces of the pig dictators who have betrayed the revolution on the farm fade into the visage of the drunken and brutal farmer. But this effect is trite in itself, rendered with timidity, and so unlike the prevailing idiom of the entire film that it is at once ineffective and gratuitous.

Some sense of what may have gone wrong suggests itself when one returns to Orwell’s text, which is used abundantly as a verbal accompaniment and followed with an unnecessary literal fidelity. Orwell’s fable is the penultimate expression of a complex social and moral pilgrimage, the kind of a journey which few human beings and fewer writers have either the courage or the opportunity to make. The dry tone and spare style of Orwell’s text is implicit with the disillusion and heartbroken disappointment of a desperately honest human being who had lived to see the greatest and best social hope of human beings converted into a cynical despotism which equalled that of Fascism, or perhaps exceeded it, in the very real sense that its leaders and supporters were for the most part not gangsters and careerists, but dedicated martyred heroes and millions of men of good will. Animal Farm was written with a sense of ultimate disappointment in the historical process as such, and perhaps also a hopelessness about the gullibility of human beings as an organized political mass. Orwell’s state of mind was as painful as it was rare, being the product of sophistication, innocence, hope and suffering combined. Little of this sense of things gets into the animation of Animal Farm, despite the abundant quotation from the text. What is characteristic and, in a way, effective is the episode when the faithful, hardworking horse, Boxer, collapses and is shipped with pure callousness to the glue factory. But this has the quality of an instance of cruelty to animals, not a betrayal of a social ideal or political injustice. It is true that heretofore the animated film has for the most part avoided direct social satire and devoted itself to pure comedy of which Disney is the most eminent master. But political cartoons show—and the example of Gulliver’s Travels suggests—how the methods and resources of the animated medium are naturally satirical.

It is hard to be sure what a person unacquainted with Orwell’s little book or ignorant of the history of the Soviet Union would make of the images of the film. For one thing, the boars and pigs who become the totalitarian tyrants of the animal politburo resemble, at times, British politicians of the past generation—Ernest Bevin most of all; although at one point there is a gleam of resemblance to Churchill’s plump baby face there is, on the other hand, no suggestion of Stalin, Molotov or Malenkov. This strange impression is increased by speeches uttered in a strong British accent and it is intensified by parliamentary mannerisms and procedures. Although the effect occurs only in passing, it is but one among many aspects of the film which tend to make one think that to a Rip Van Winkle or a Martian man the film might seem to be an attack on the British Labour Party or a parable of the vanity and foolishness of political and social reform.

Purely as a matter of method, there is certainly too much of a reliance upon literal transposition and Orwell’s text, just as there is certainly too little effort to respond to the animated strip as a playground for the visual imagination. Whatever doubts one might have about this judgment disappear when one reads the description of how the film was produced in The Animated Film, by Roger Manvell, who reports that the makers of the film “before they began their work, had to prepare themselves to recreate the life of an English farm …” and hence “they had spent much time on farms observing animal movement and behavior.” That this is misplaced conscientiousness is a fact disregarded by Mr. Manvell, although when he comes to speak of the entire medium, he says:

It is unfortunate that this principle has so little influence upon the making of the film. But on the other hand, it is quite foolish to forget how difficult, under any circumstances, it would have been to be adequate to the parable of an author who wrote with the feeling that he no longer wanted nor had any reason to live.

This article appeared in the January 17, 1955 issue of the magazine.