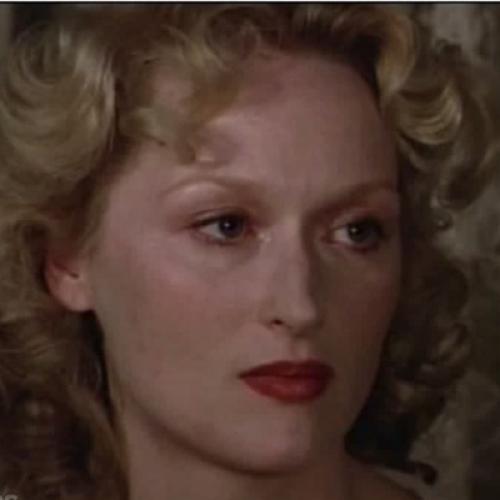 Stingo comes back to his newly rented room in the Brooklyn boarding house bearing a carton of Spam packages on his shoulder, looking apprehensively at the ceiling of his room. The sounds of what is presumably a torrid sexual encounter are coming from above. The carton totters on Stingo’s shoulder as he totters into his room. I hoped—in vain. The sounds so unnerve Stingo that he stumbles into cinematic cliche: he spills the packages. I’d hoped he wouldn’t. The chandelier in his ceiling is shaking. Again I hoped—in vain—that the camera wouldn’t go in for a close-up. In it went, close, so that we couldn’t miss the shaking chandelier. Thus, from the start, platitude flecks the direction of the film that Alan J. Pakula has made from William Styron’s novel Sophie’s Choice.

In some ways, however, the film is better than the book. Primary benefit: we are spared almost all of Styron’s grandiose prose. It is only when the unseen Josef Sommer, as the older Stingo, reads brief sections on the soundtrack, for commentary or transition, that we realize how lucky we are: whatever there is of merit in the book has been freed by the film from its prison of gummy rhetoric. Also, though the script necessarily condenses, it does not significantly reduce. It’s a sorry comment on any novel that a film can improve its realization of character and place; but it’s true here. Sophie is more vivid than she was in the book; and a glance of the camera can eliminate pages and pages of detail that Styron laid in, stratum after stratum, in language blended of Dreiser and Warren and Wolfe, then pumped full of sophomoric exaltation. Those glances of the camera further indicate how the film medium in general has liberated the novel in general from the drudgeries that Styron still piles on it —a liberation exploited by the best of contemporary novelists here and abroad. Pakula’s film, even though forced to omit some of the better bits in Styron’s book, demonstrates (unintentionally) that Styron’s whole view of novel-writing is tediously antiquated.

But in other ways the film is just as unsatisfactory as the book, because it’s inseparably strapped to basic flaws. The story has no center, no protagonist. To whom does the action of the novel happen? What does happen in the book, other than the gradual revelation of action that has already happened? Sophie has long ago made her choice; all that is left for her in dramatic action is to reveal it. Her lover Nathan is not a character, he’s a pathological case; he evokes little more than, at best, pathos and a wish that someone would phone for an ambulance. Stingo is in very nearly the same position as Christopher in I Am a Camera. He watches, consoles, and grows wiser through watching. But, despite the fights that he witnesses and the picnics and games that he joins, what does he actually do in the story? In the novel he could function as our eyes and and could filter what he saw through the perspectives of the intervening decades. In front of the camera. Stingo merely occupies space without dramatic justification; he’s a confidant posing as a protagonist. When he arrived in Brooklyn (Styron tells us in his priceless prose) Stingo’s spirit was

unacquainted with love and all but a stranger to death. [This means that he had not yet made love; does it also mean that he had not yet died?] I could not realize then [O venerable phrase! Often it’s rendered as “Little did I know at the time. . . . ”] how soon I would encounter both of these things [things?] embodied in the human passion and human flesh [as distinct from horse passion and horse flesh?] from which I had absented myself in my smug and airless self-deprivation.

Or, less smugly and airlessly, he had not yet got laid or seen a corpse. But almost all that Stingo does, in both film and book, is to “encounter” these “things” as an observer.

Inevitably the film was bound to be more interesting in its flashbacks than in its “present” action. But in those flashbacks, the film underscores a grossness in the book.

All through his career, Styron has been in search of evil—not inauthentic villainy but evil that would be credible for the contemporary reader. I won’t trace that career here; but it seems reasonable to assume that he felt he had reached the Unholy Grail when he lit upon the Holocaust as a subject. One of the novel’s epigraphs is from Malraux: “ . . . I seek that essential region of the soul where absolute evil confronts brotherhood.” What more absolute evil than the Holocaust, what starker confrontation with brotherhood? But the facts of Auschwitz were not enough for Styron: he had to contrive a Big Moment to cap them. (I don’t remotely contend that such horrors did not happen: I’m speaking only of Styron’s contrivance.) He had to devise a theatrical zinger to top the Holocaust. In Auschwitz a diabolical German Army doctor forces Sophie to choose between her two children: one is to live, one to die. If she doesn’t choose, both will die. With one flip of his masterly hand, Styron turns the Holocaust and Malraux’s absolute evil into melodrama. How easily we can envision a nineteenth century theater poster of the scene, the distraught Sophie hugging her two children, the evil doctor leering at her, the background streaked with red, the title coursing along the bottom. In the film as in the book, the long-delayed relevation of her choice, a secret revealed to at least one person, is what, I infer, frees Sophie to die. But the film provides even less explanation than the book as to why she chose the son over the daughter; and the film provides nothing of the doctor’s reason for forcing the choice on her. (In the book Styron carpenters some mechanics that allow Sophie to overhear conversation about the doctor’s background. He was in fact a very religious man. Stingo deduces that the doctor committed a great sin so that he could repent greatly. Pallid Dostoevsky is used to aggrandize old-fashioned hokum.)

I HAVE BEEN treating the novel as inseparable from the film because Sophie’s Choice has been read by many people who may see the film; for the same reason, I haven’t sketched the story. Pakula wrote his own screenplay. The condensations were inevitable, of course (even so, the film runs over two and a half hours); but, though one cannot blame him for the organic defects in the book, one can still deplore Pakula’s Choice. Cinematically speaking, he has chosen tough nuts before, notably All the President’s Men where, essentially, he had to make a film about typing—two reporters typing away. But this time his penchant for the cinematically difficult has led him into the amorphous and flaccid. And, though he showed in President’s Men some touches of style, here he shows only a weakness for calendar art.

The cinematographer, Nestor Almendros, has previously done much wonderful work, but collaborating with Pakula, he frequently sinks into prettiness or imitation. The shot in which we discover Nathan “conducting” Beethoven’s Ninth in his room, with four or five reflections of him in the panels of his bay window, is pseudo Welles. The misty twilight window-seat shot with Sophie and Stingo, which is where the flashback narrative begins and ends, is sheer Maxfield Parrish. And the tilted-camera views of Brooklyn Bridge are like hand me down Joseph Stella.

But Almendros photographs Meryl Streep excellently, which is hardly an incidental matter since her performance of Sophie is the film’s sole achievement. To begin with, she looks more translucently beautiful than ever, and she has the Polish accent right, (I know; some of my best friends are Polish!) What Streep has wrought, possibly with Pakula’s help, is a psychological verity for Sophie that she reveals through patterns of motion: she seems often to be moving sideways to avoid confrontation, she seems to be shunning the close scrutiny of others. Yes, of course, she often faces people, often embraces, kisses, converses with them, but the overall impression of her movement is sidling, gently attempting to hide herself in open space. Through this kinetic concept, Streep gives Sophie an aura of concealment. We know, without any grimaces or meaningful sighs, that she is not revealing her whole self to anyone, including her lover. When the truth about her father arrives, when we learn of her “choice,” they seem like resolutions of suspended chords.

Sometimes Pakula hands the picture over to Streep: the camera fixes on her in medium close-up and, virtually without any change of shot, she tells a long story. It’s what Bergman has done a number of times with Ullmann, and it’s been done before with Streep. (It’s done even in her recent abysmal thriller Still of the Night.) She handles these moments like a virtuoso—a compliment that contains a hint of worry. Virtuosos like John Wood or George C, Scott can grow to consume their roles rather than portray them. Streep is nowhere near that solipsism yet, but she is at the point where her knowledge of her excellence has begun to accompany the excellence itself.

This is not a quibble: it’s a concern for a major talent. Here are two moments that are wonderful but in which we are aware that she knows it. When she first talks about her father, she sits on a piano bench, playing with a feather boa that hangs about her neck. She plays “off” the boa adroitly, but cleverly. Later she recalls a moment when, after she had reached Sweden following her rescue, she felt that Christ had turned away from her. Listen to what she does with the one word “Christ”: the tiny pause just before it, the slow formation of the first consonants, the suspension of the middle, the almost reluctant close of the word. She makes the monosyllable an utterance. It’s wonderful. Very, very few American actors could do it, and it’s something worth being able to do. Still, it’s noticeable.

None of which is to deny that the value of the film is in Streep’s richness. Pakula even closes the picture, as Stingo trudges back across the Brooklyn Bridge to Manhattan, with a Botticellian image of the now-dead Sophie hanging over him in the sky. (Just so you’ll know he’ll never forget her, folks.)

Kevin Kline, as Nathan, works feverishly. He has great energy and some fire, but he cannot fuse the fragments of this demented character into—if the phrase is possible—a schizoid whole. We get a series of ecstatic and furious bits. Peter MacNicol, the Stingo, is a pleasant youth. It’s hard to believe that he has served a hitch in the Marines; it’s harder still to believe that Sophie would have wanted him as even a one-night lover. MacNicol does nothing wrong; but he is less like a young man trembling on the edge of a life in art than a sensitive high-school poet who wishes he could make the basketball team and attract girls.