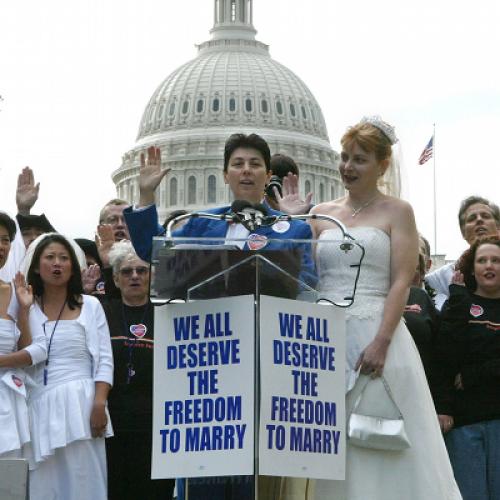 The full faith and credit clause is about to become the Constitution's hottest provision. Found in Article IV of the original Constitution of 1789, its first sentence provides that “Full Faith and Credit shall be given in each State to the public Acts, Records, and judicial Proceedings of every other State.” This guarantee makes our lives in a mobile polity easier, assuring that local driver's licenses, birth certificates, marriages and divorces are recognized all around the country.

But the provision is about to be put to a historic test. It is likely that sometime in the next two years Hawaii will recognize marriage between gays or lesbians. In anticipation, nine states (and counting) have adopted legislation to block their courts from giving full faith and credit to Hawaii same-sex unions. The last time so many states declined to recognize marriages performed elsewhere was the Southern refusal to accord full faith and credit to different-race marriages. But, in 1967, the Supreme Court held that such discrimination against different-race marriages was unconstitutional. Today, at least in part out of constitutional obligation, some states recognize “incestuous” first-cousin marriages if they are legal in the state where the couple married (as is the case in eleven states and the District of Columbia).

Other states refuse to recognize incestuous marriages, however, basing their refusal upon a suggested “public policy” exception to full faith and credit obligations. The Supreme Court has not definitively ruled on the legality of a public policy exception. But the Court's insistence in Romer v. Evans that animus against gay couples is not a legitimate state interest, much less an important public policy, suggests that a state could not invoke it to deny acceptance of same-sex marriages recognized in another state.

Normally, the Supreme Court is the arbiter of constitutional issues such as full faith and credit. But in this case Congress may step in. Section 2 of the Defense of Marriage Act, introduced last month by Representative Robert Barr of Georgia, Bob Dole and others, would relieve states from giving full faith and credit to “any public act, record, or judicial proceeding respecting a relationship between persons of the same sex.” The bill is on a fast track, probably too fast for any but an election year.

The Framers of the Constitution didn't think so. The first sentence of the clause was adopted from a similar provision in the Articles of Confederation. The second was added by James Wilson and others at the Philadelphia Convention. Wilson argued that “if the legislature were not allowed to declare the effect the provision would amount to nothing more than what now takes place among all independent nations.” States in our polity, he contended, must recognize one another's records and judgments not simply as a matter of discretion, but of right—and the Convention agreed with him.

The Framers, in other words, intended the full faith and credit clause to have real bite, and did not expect Congress to use the phrase “prescribe the Effect” to defang it. That is precisely the way Congress has implemented the clause for 200 years. In statutes adopted in 1790 and 1804, Congress added statutory authorization to give effect to the clause and to make it applicable to any court in the United States. It did nothing further for six generations. In 1980 and 1994, Congress legislated particular rules (consistent with constitutional requirements) to assure full faith and credit for child custody and child support orders. Never in the nation's history has Congress invoked the “prescribe the Effect” sentence to undermine the guarantees of the full faith and credit clause as interpreted by the courts. Unless the Defense of Marriage Act merely implements a valid public policy exception, it raises grave constitutional concerns. And the public policy advanced by the bill, as the Supreme Court said in Romer, does not justify testing the limits of congressional power.

The sponsors of the Defense of Marriage Act see marriage as an endangered institution, and indeed it is—by high divorce rates, above all. Furthermore, the full faith and credit clause must shoulder some of the blame, though not in the way the bill's sponsors imagine. The full faith and credit clause and its federal statutory codification require that quickie divorces in one state be recognized in other states, including those seeking to preserve more lasting marriage ties. This has created a race to the bottom in which states with the loosest divorce rules (such as Nevada) have become national magnets attracting spouses looking for easy exits from lifetime commitments. If the sponsors of the Defense of Marriage Act really wanted to defend marriage, they would seek to negate full faith and credit for Nevada divorces (a legal threat to marriage currently in place), not for Hawaii same-sex marriages (a future scenario that poses only a hypothetical threat).

And, if Dole and Barr are really interested in protecting the institution of marriage against immoral unions, there are other, more appropriate, targets for their indignation. Under Virginia law, for example, a man who rapes and impregnates a 14-year-old girl can be relieved of his crime if he then agrees to marry the girl and her parents consent. Such a “rapist marriage” would then be recognized in other states. Why not defend against “rapist” and “child molestation” marriages? Eleven states permit first cousins to marry, and other states routinely recognize these marriages. Why not defend against them?

Election-year demagoguery yields notoriously poor legislation, and the Defense of Marriage Act is no exception. But the reasons to hesitate before adopting this legislation are conservative ones: federalism (marriage issues are usually resolved at the state level), original intent (the Framers didn't intend Congress to have the power to derogate from the full faith and credit clause) and tradition (Congress has never done so). Perhaps the best reason is the most conservative: same-sex marriage would lessen alienation between gay and straight America and allow lesbian and gay couples to embrace family values.

This article originally appeared in the June 17, 1996 issue of the magazine.