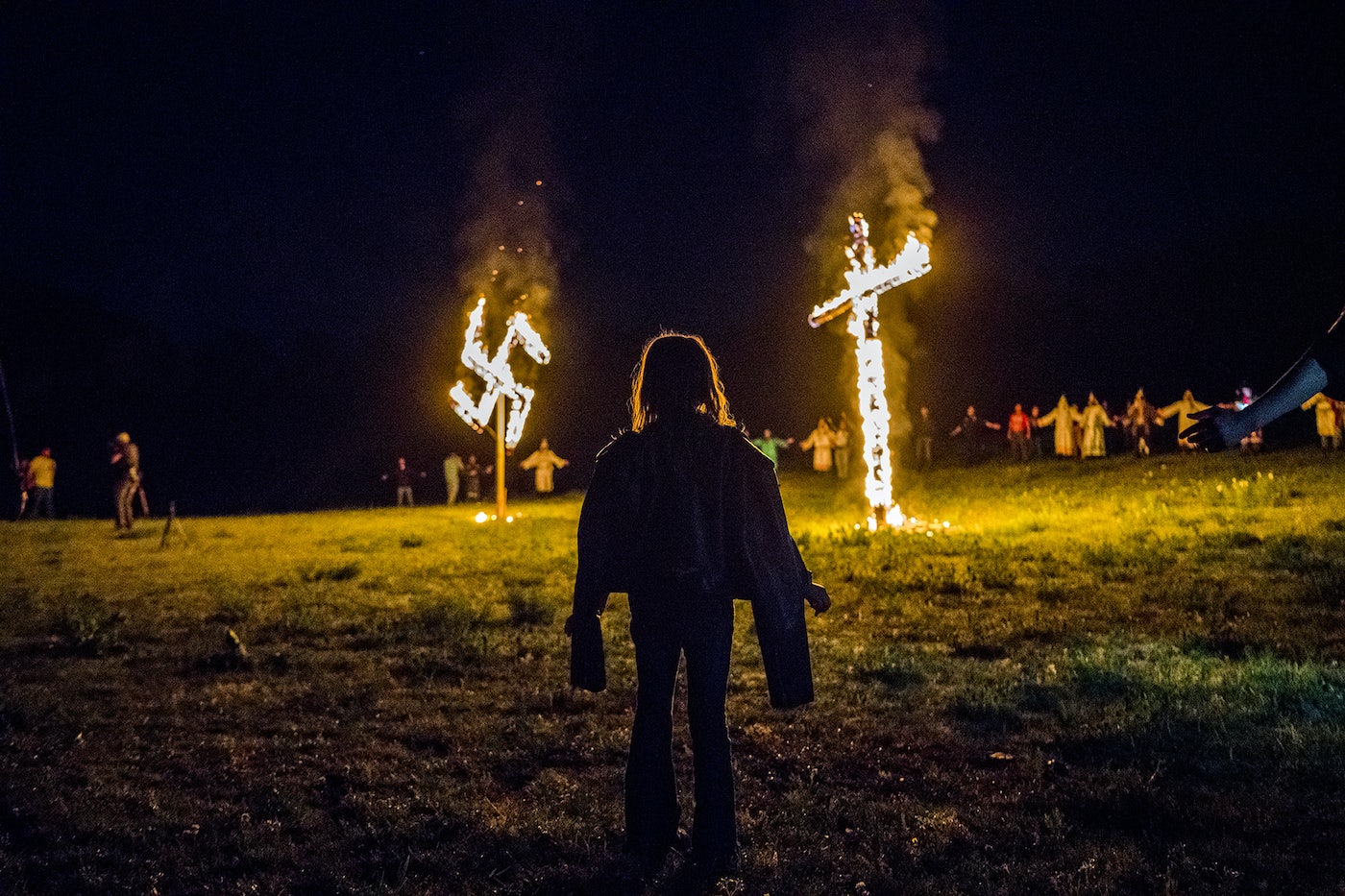 We are forced to confront many things in the images that photographer Johnny Milano spent five years capturing. The ceremonial burning of a cross and a swastika in an open field. The silhouette of a child, a young and defenseless observer of hate, situated between the flaming structures. The Nazi symbol on shirt and skin. Some of the images look modern; others seem straight out of an earlier era. They represent a people striving to keep with tradition, while simultaneously looking to rebrand their beliefs and appeal to new followers. Membership spreads not simply through inheritance, but through outreach.

Taken together, Milano’s images make it impossible to deny that white supremacy is alive and well in this country. Powered by social media platforms, and encouraged by the rise of Trump-as-champion, America’s hate groups have emerged from the fringes with a newfound sense of respectability. In 2015 alone, the number of homegrown hate groups jumped by 14 percent—a proliferation unprecedented in recent times.

It would be all too easy to turn away from this reality, or consign it to the distant past. But Milano turned his camera lens directly toward it. For many, these images will be shocking. Others will be more saddened than surprised. But thanks to his work, we are all met with the direct evidence that white supremacist groups are thriving in America.

Let these photographs serve as proof that we are far from the postracial ideal that many Americans have been clinging to. And let them remind us not to be fooled: The spread of white supremacy is not confined to the South, to states like Texas, Georgia, and Tennessee­—it extends deep into the heartland, to Pennsylvania and Maryland and Ohio and Indiana. Hate groups exist all across the United States—coming soon, quite possibly, to a neighborhood near you.

Children watch family members stage a march at a farm in rural Indiana last May. Klan rallies feature a mix of patriotic symbols and emblems of hate; the group’s oft-chanted slogan urges devotion “for God, for family, for country, for the Klan.”

A Klan rally near Versailles, Indiana, last spring included a raffle for a “custom-made” robe and hood. Although the Klan remains small—with fewer than 8,000 members nationwide—the group has gained a newfound momentum with the rise of Trump.

A swastika armband—part of the “battle dress uniform” of the National Socialist Movement—laid out in preparation for a rally at the Georgia State Capitol on Hitler’s birthday. Last year, in a makeover designed to “mainstream” neo-Nazis, the group dropped the swastika and replaced it with an Odal rune worn by Nazi troops in World War II.

A young woman is fitted for a Klan hood before a cross-burning last year near Danville, Virginia. White supremacist groups—traditionally all-male, with a strong patriarchal bent—are recruiting women as a sign of their new “inclusiveness.”

Members of the Confederate White Knights get dressed, and armed, for a rally in rural Maryland. While organized Klan violence is rare, a recent study found that Americans are seven times more likely to be killed by homegrown right-wing extremists than by Islamic terrorists.

A member of the Traditionalist Worker Party, which calls for Christians to take up white supremacy, before a rally in Harrisburg, Pennsylvania, three days before Trump’s election. The group’s co-founder, Matthew Heimbach, calls Trump a “gateway drug” for white nationalism.

Members of the National Socialist Movement kick back after a rally in rural Texas. The group aims to unite America’s white nationalists in a single movement. “They always attempt to silence us,” says Jeff Schoep, the organization’s leader. “But they always fail miserably. Thankfully, we still have freedom of speech here.”

Van Jones is the former green jobs adviser to President Barack Obama and founder of the Dream Corps, a social justice accelerator. He is a CNN political commentator and author of The Green Collar Economy and Rebuild the Dream.

Johnny Milano is a New York–based photographer whose work has appeared in The New York Times, CNN, and The Wall Street Journal. He spent five years capturing the rise of white supremacy groups in the United States.