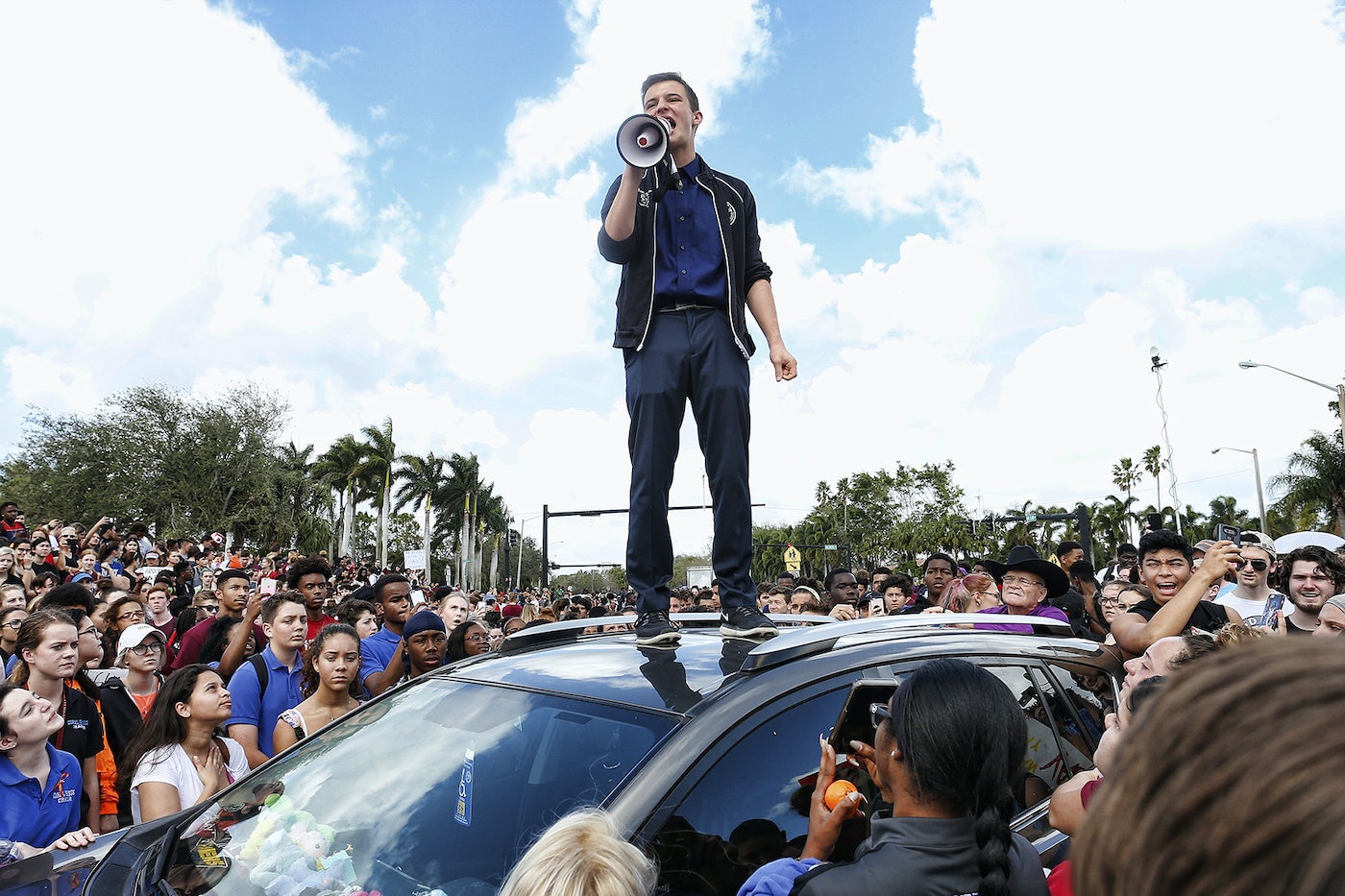 Republicans have blamed the massacre, as they have previous ones, on “evil” and mental illness. Trump has called for more guns on school campuses. Congress still has not lifted the federal ban on gun violence research. And politicians continue to accept money from the NRA. As Stoneman Douglas senior Emma Gonzalez said, “The guns have changed, and the laws have not.”

The Parkland survivors and their allies are channeling their grief and frustration into activism—and not just online. They’ve protested at a federal courthouse in Fort Lauderdale, where Gonzalez gave her famous “We Call B.S.” speech. They’ve announced a nationwide protest on March 24 in Washington, D.C. They’ve traveled to the Florida State Capitol lobbying for stricter gun laws. And they’ve grilled the NRA spokeswoman and Senator Marco Rubio at a CNN town hall, where, as the night came to a close, the Stoneman Douglas drama club sang to the crowd, “We’re putting up a fight / You may have brought the dark but together we will shine a light.”

Students from Marjory Stoneman Douglas High School, where 17 people were killed in a mass shooting last week, prepare to board buses in Coral Springs, Florida on February 20. The students are traveling to Tallahassee, the state capital, to call for a ban on assault rifles.

Ian Kravitz hugs his daughter Madyson, 16, as she and other students from Marjory Stoneman Douglas High School board buses on February 20 to travel to Tallahassee to call for a ban on assault rifles.

Logan Locke, 17, and other students from Marjory Stoneman Douglas High School on a bus bound for Tallahassee.

About two dozen mostly local high school students sit on the floor in an office housing several of the Florida Republican leadership inside the state Capitol in Tallahassee, Florida, on February 21. Thousands of chanting students, including survivors of the Florida school shooting, rallied at the state Capitol on Wednesday, demanding changes to gun laws and threatening to remove Republicans who refuse to address new gun-control measures.

Ryan Deitsch, 18, and other students from Marjory Stoneman Douglas High School meet with lawmakers on the House floor at the Florida State Capitol in Tallahassee on February 21. Students advocating a range of new gun control measures met with Republican leaders apparently set on a package of narrower measures; House Speaker Richard Corcoran said here that he saw AR-15 rifles as legitimate hunting weapons.

Jaclyn Corin, Ryan Deitsch and Alfonso Calderon, along with their classmates from Marjory Stoneman Douglas High, listen as fellow student Lorenzo Prado speaks at a press conference recalling the day of the shooting. One hundred students from the Parkland high school met with legislators at the state Capitol to talk about gun control on February 21.

Seventeen survivors from Marjory Stoneman Douglas High School lie down on the floor in silence inside the state capitol in Tallahassee, Florida, at the approximate time of the attack one week later.

A demonstrator holds a sign reading “Enough is Enough” while protesting gun violence outside the White House in Washington, D.C., on February 21.

Demonstrators listen as the names of the victims of the Florida school shooting are read during a student protest for gun control legislation in front of the White House on February 21.

Students from Montgomery Blair High School march down Colesville Road in support of gun reform legislation on February 21 in Silver Spring, Maryland. In the wake of last week’s shooting in Parkland, Florida, where 17 people were killed, the students planned to take public transportation to the U.S. Capitol to hold a rally demanding legislation to curb gun violence in schools.

Pittsburgh high school students Mia Arrington, center, 18, and Cheyenne Springette, right, 17,  lead chants during a walk-out in solidarity with other high schools across the country to show support for Parkland, Florida, students on February 21.

Julia Cordover, the student body president at Marjory Stoneman Douglas High School in Parkland, Florida, cries during listening session with high school students and teachers and President Donald Trump in the State Dining Room of the White House on February 21.

Irene Hsu is a reporter-researcher at The New Republic.

Sharon Zhang is an editorial intern at The New Republic.