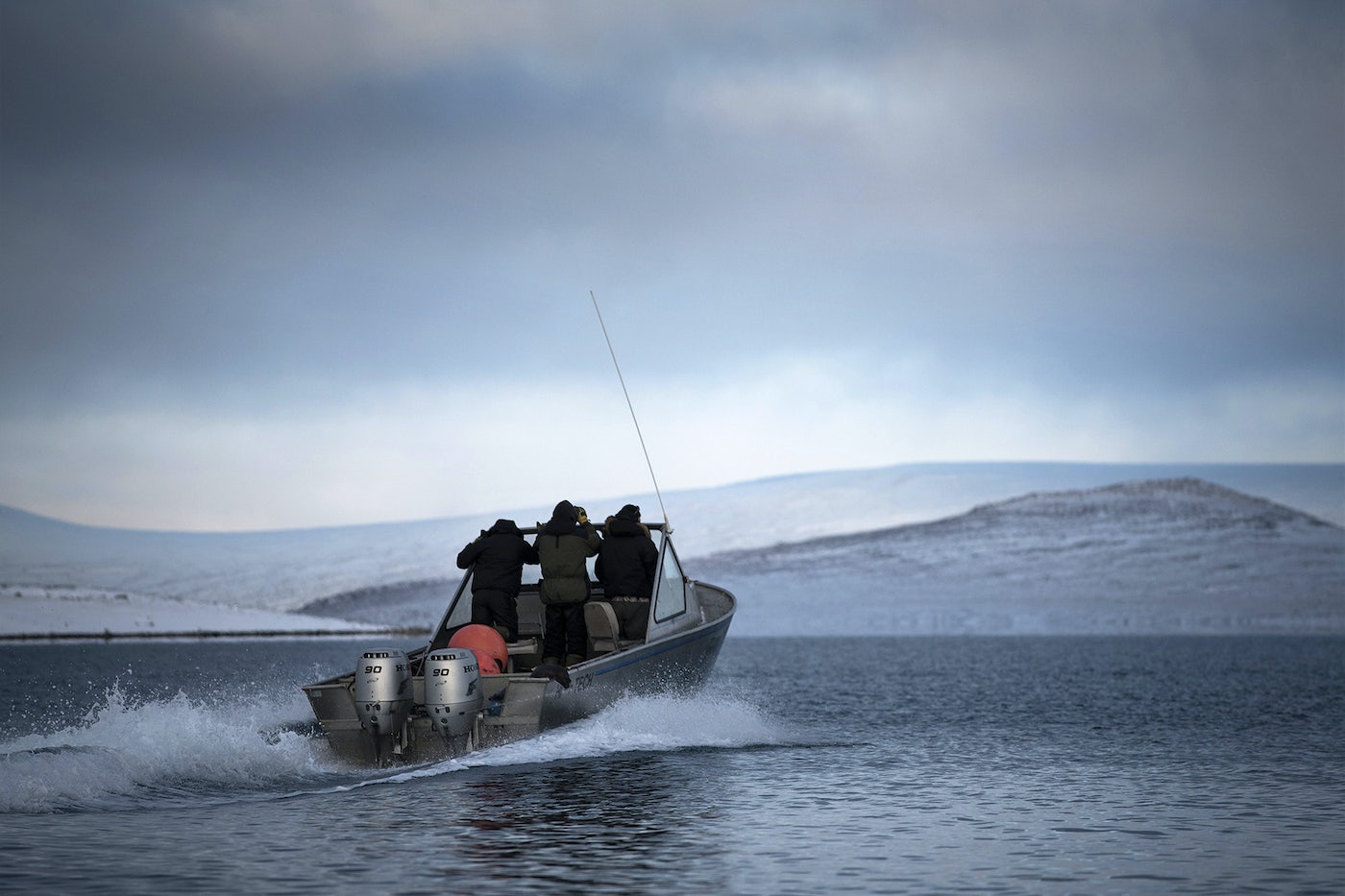 Seismic blasts—loud sonic explosions fired through the ocean—map the seabed floor for oil and gas deposits to extract. Opponents, like the Wilderness Society and the group Polar Bears International, say the testing has deleterious effects on the land and the wildlife. The Canadian government has opposed opening up ANWR for these reasons as well.

Some Alaska natives support the oil exploration for its economic potential, while others, like the Gwich’in nation, argue that it would disrupt the caribou herd upon which their traditional diets—and much of their culture—depend.

Thousands of miles across the icy North, on the east coast of Canada, Inuit hunters several years ago worried about the same outcome in their own oil battle. They fought back—and won. As ANWR exploration draws nearer, the Canadian Inuit victory hints at an alternate path: lessons from a rare win for tribal communities fighting outside interests.

When the call on the radio came, the hunters of Clyde River swung into action. In pickup trucks and four-wheelers, they roared toward the tiny marina where dozens of boats bobbed in the current. They grabbed their guns and ammo, swung over the wooden sides of the boats, revved engines, and raced toward the inlet where the narwhal were spotted minutes before. It was the fall of 2016, and the Arctic whaling season was at full throttle.

Bruce Hainnu sped through the icy water with the other hunters and then cut his engine, leaning against the steering wheel as he scanned the horizon. His adopted son, Jacques Hainnu-Simard, explained they were looking for the plumes of mist that rise from whales’ blowholes.

The radio crackled to life again: The narwhal were staying close to shore, possibly to evade a killer whale. But then they dipped out of sight.

The hunters hunched against wind that took the temperature below zero, and continued scanning the waves of the frigid Arctic Ocean. After about 30 minutes or so with no further sightings, the two declared the trip a bust.

“Time to turn in, and hope for better luck tomorrow,” Jacques said.

Hunting in the Arctic has never been easy. It takes years of experience navigating treacherous conditions, not to mention the expense of fuel and supplies in this far-flung corner of the Canadian Arctic.

But between 2015 and 2017, hunters like Bruce and Jacques found themselves facing their biggest challenge yet: a proposed oil exploration project that would make their livelihood all but impossible.

In 2014, Canada’s national energy board approved a five-year oil exploration project in Arctic waters. The permit would allow exploration along the entire coast of Nunavut’s Baffin Island—about 1,000 miles of the ocean between Canada and Greenland.

Jerry Natanine was mayor of Clyde River, which boasts a population of about 1,000 people, when the exploration project was approved. At first, he was elated. Oil exploration could bring much-needed jobs and infrastructure to the remote town, he thought.

But then he spoke with his father and uncle, who told him that seismic testing was not new in Clyde. Back in the 1970s, blasts to map the Arctic seabed had a profound impact on marine animals. When the hunters went out on the ice, lounging seals didn’t even notice their presence. As the hunters got closer, they saw pus dripping from the animals’ ears—they’d gone deaf. Without a sense of hearing, the animals couldn’t protect themselves from predators and risked dying in droves.

“You have to fight it,” Natanine’s father urged him. “Do anything you can to stop it.” Potential damage would not be limited to the animals in the direct path of seismic blasts. Other animals, including polar bears, feed on marine mammals, while hunters and their families depend on Arctic animals for food, skins, and other supplies. The blasting could also affect migration patterns for seals, whales, fish and waterfowl.

Blasting could, Natanine argued, destroy “the whole ecology of the area.”

The energy board approved testing for five years, to take place when the river is free of ice—from about July to November. “Every day, 24 hours a day, just blasting every 15 seconds,” Natanine said.

To make matters worse, Natanine said, the project would bring few jobs, if any, to the community. Only a few engineers are needed to operate the sonar blasts, and they require special training—which no one in Clyde River possesses.

“There’s nothing here for Inuit. There’s no benefit,” Natanine said. “All they want to do is take the oil and leave and forget about us.”

Natanine appealed first to the National Energy Board, which had granted the permit; that appeal was denied. The next step was an appeal to Canada’s Supreme Court, but Clyde River had neither the funds nor the expertise to wage a long legal battle. Natanine was at a loss on how to proceed. He approached several indigenous and environmental groups, but no luck.

In recent decades, the Inuit have faced many external obstacles to practicing their millennia-old traditions. In the 1950s and 1960s, the government forced the Inuit into permanent villages. Around the same time, officials killed most of the dog teams upon which the formerly nomadic hunters relied to move on the land—something Canadian authorities maintain was a matter of public safety, but the Inuit say it was done to make the relocations stick.

The hunters who were able to switch to motorboats and snowmobiles were dealt another major blow just a few years later. In the 1970s and 1980s, the environmental advocacy group Greenpeace lobbied for the end of seal hunting, introducing images of fluffy seal pups and bloodied Inuit hunters into the popular imagination. The resulting sealskin ban devastated Inuit communities; seemingly overnight, hunters could not sell sealskins and could not afford the expense of hunting by motorized vehicles for seal meat. Hunger, poverty, and addiction soon swept Nunavut’s communities.

“They made our lives living hell,” Natanine said of Greenpeace’s sealskin lobbying. “All the hardships of poverty, of not having money—that’s where it all started.”

Before oil companies began moving into the Arctic, Greenpeace was enemy number-one for many Canadian Inuit. But Natanine was desperate—and he was not blind to the changing times. Oil exploration posed a much bigger threat.

“Our lives are at stake now,” he said.

One day as he sat in the mayor’s office, he read Greenpeace’s apology in a newspaper for the organization’s devastating role in the sealskin ban. Natanine saw a way to mend the divisions of the past—and to save Clyde’s future. He approached the organization and asked them to provide legal help. Greenpeace agreed, and the two joined forces to take the seismic testing case to Canada’s highest court.

Clyde’s residents weren’t just worried about the tests—they were also concerned about the effects of oil drilling, if resources were discovered.

“If there was an oil spill, it would affect us right away. And if it happened during winter, there would be no way to clean up the oil spill,” Natanine said. “It would devastate our lives.”

Nick Illauq, a product of a traditional hunting family and a member of community group Fight Against Seismic Testing, said the “resources” to clean up a spill don’t exist in this area. And the oil industry, he argued, is dying. Even if oil were discovered, the companies conducting seismic tests might conclude that the conditions in the Arctic make drilling prohibitively difficult and expensive. By then, Illauq worried, it would be too late—marine mammals would be gone along with the livelihoods of Clyde residents.

“This issue is one of the most important things we’ve ever fought against,” he said.

Instead, Illauq hoped his hometown could capitalize on its other more renewable natural resources.

“We have a never-ending wind supply,” he said. “We have 24 hours of sunlight for 79 days straight.”

With the help of its new partner, Greenpeace, Clyde River installed solar panels on their community center last summer, to meet some of the village’s energy needs. The panels are owned by the community, and several locals were trained on how to install and maintain the arrays.

In the meantime, the Inuit of Clyde River waited for the Supreme Court to decide the fate of their community.

The battle was called Justin Trudeau’s first major environmental challenge, but it resonated outside of Nunavut and around the world. The decision would set a precedent for existing and future indigenous land disputes, and it would also likely have implications for other seismic testing battles around the world, such as in New Zealand and Peru.

The Court heard Clyde’s case on November 30, 2016. A few weeks later, Canada’s Prime Minister Justin Trudeau made a promising announcement: all Arctic waters would be “indefinitely off limits to future offshore Arctic oil and gas licensing,” subject to review every five years.

But Trudeau’s new rule only applied to future oil and gas permits. The residents of Clyde River continued to wait for the court decision, which they feared they would lose. “I am thinking it will be against us,” Nick Illauq said in early July 2017, interpreting the federal government’s move to educate communities on natural resource regulatory systems as a bad sign.

Then, after eight months, the decision came through. In a unanimous decision handed down on July 26, the court ruled that the National Energy Board consultations with the residents of Clyde River were “significantly flawed” and did not take into account the massive impact the oil exploration would have upon Inuit lives.

The Inuit had won. Seismic testing would not proceed.

Clyde River held a celebration to honor the decision. Natanine was emotional and overjoyed—and he was also relieved. “There was this big sigh of relief in our community to realize the fact that we were on the side of justice all along,” he said.

Asked recently about other communities looking to resist oil exploration around ANWR and elsewhere, Natanine highlighted the importance of community.

“The biggest thing for us was that we were united,” he said. Decisions were made in joint meetings between hamlet officials and the Hunters and Trappers Office. These decisions were then announced on the local radio station—the main form of mass communication in Clyde, other than Facebook—requesting feedback from the public. And, of course, partnering with outside organizations helped boost their message. “All the people that we networked with, that gave us advice, and that knew how the system of appealing works,” he said, “were very beneficial in all that we were doing.”

Natanine wasn’t just relieved that the fight against seismic testing was successful. He was also pleased that the partnership with Greenpeace, seen as a huge risk in the community at the time, became an unexpected blessing.

“It was one of the best parts of the case as we, as a community, were able to deal with the historic trauma that we experienced through the seal ban,” he said.

By banding together against a new threat to their livelihoods and well-being, he said, Greenpeace and the Inuit community—previously opponents—finally found closure for decades-old upheaval, and discovered a way to make their voices heard on future issues.

To win these battles, communities need to articulate the effects of oil exploration on lives and livelihoods. To wage the battle, they need alliances.

Melody Schreiber and Camilla Andersen reported from Nunavut on a fellowship with The GroundTruth Project.

Melody Schreiber is a journalist and the editor of What We Didn’t Expect: Personal Stories About Premature Birth, to be published in November 2020.