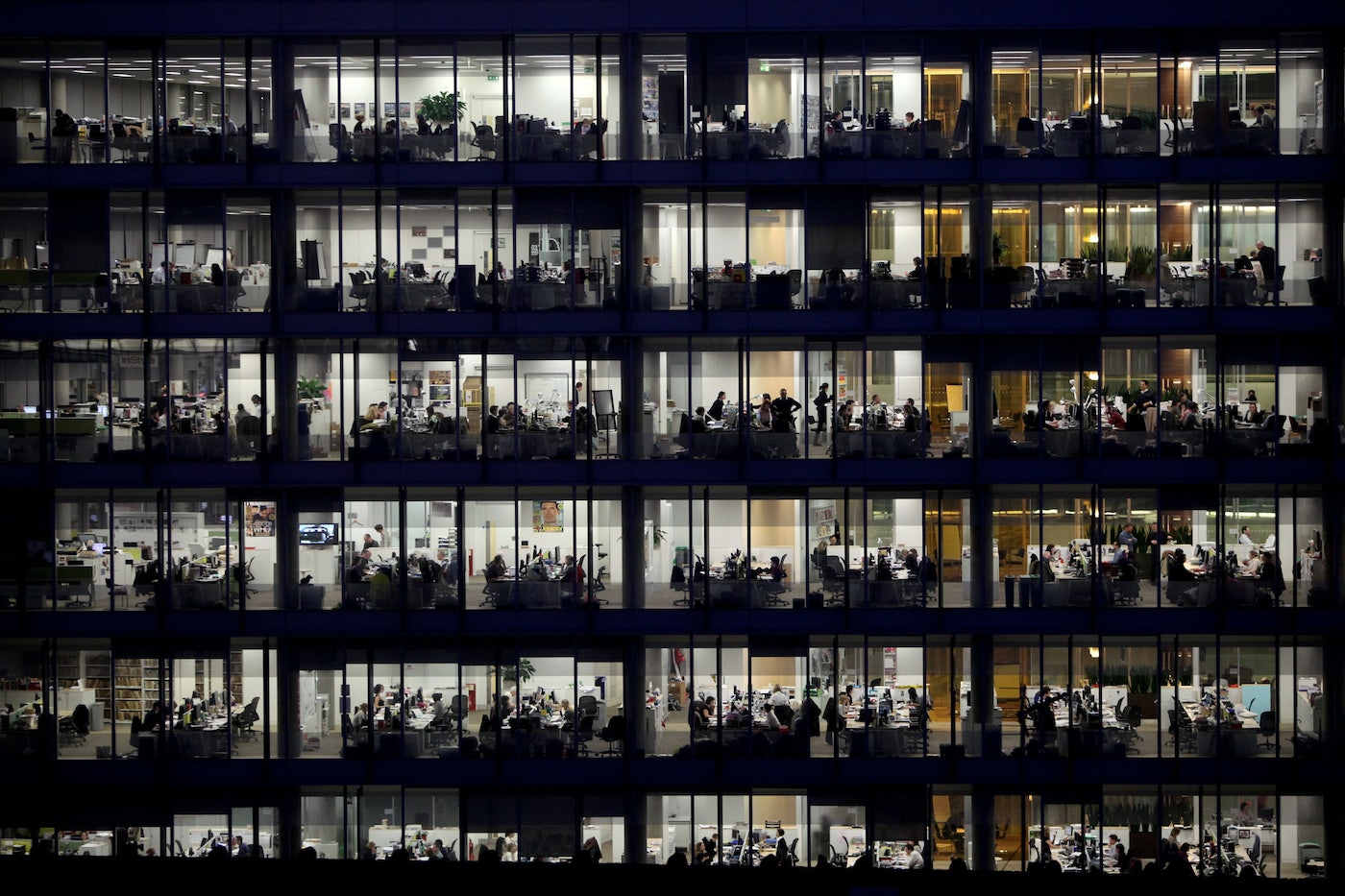 Elite workers are in existential crisis: Their stable, well-paying jobs are making them “miserable.” That’s the takeaway from several recent articles in the (elite) press. In the New York Times Magazine, Charles Duhigg explored the disappointment of latter-day Gordon Gekkos—Duhigg’s fellow Harvard Business School alumni—whose pursuit of wealth has left them hollow. “I feel like I’m wasting my life,” one told him. “When I die, is anyone going to care that I earned an extra percentage point of return? My work feels totally meaningless.”

At The Atlantic, staff writer Derek Thompson posited that “workism,” the religion of work, is to blame. “The best-educated and highest-earning Americans,” he wrote, “have chosen the office for the same reason that devout Christians attend church on Sundays: It’s where they feel most themselves.... But our desks were never meant to be our altars.” A culture that worships work is “setting itself up for collective anxiety, mass disappointment, and inevitable burnout.”

The Times’ Erin Griffith shares Thompson’s theory. “Perhaps we’ve all gotten a little hungry for meaning,” she wrote. “In San Francisco, where I live, I’ve noticed that the concept of productivity has taken on an almost spiritual dimension. Techies here have internalized the idea—rooted in the Protestant work ethic—that work is not something you do to get what you want; the work itself is all.” The “logical endpoint of excessively avid work,” she added, “is burnout.”

There’s merit to this view. Americans of all stripes—millennials especially, some argue—are indeed burned out, and elites in particular have unrealistic expectations that work be not just remunerative, but self-defining and wholly fulfilling. It’s also true that the rising devotion to work in America correlates with a decline in religious worship. But work itself is neither a religion nor a substitute for it. As some of the above reporting makes clear, work too often accomplishes precisely the opposite of what religion promises: It saps meaning from life.

What, then, can save us from the hell of work in hypercapitalist America? The answer is right in front of us. Let us bow our heads.

Thompson defines workism as “a kind of religion, promising identity, transcendence, and community,” later adding that it’s “the belief that work is not only necessary to economic production, but also the centerpiece of one’s identity and life’s purpose; and the belief that any policy to promote human welfare must always encourage more work.” In an increasingly secular America, “workism is among the most potent of the new religions competing for congregants.”

Religious affiliation and working hours have both declined in the U.S. in recent decades. But as Thompson points out, the highest earners work more now than they did in the past. And Americans making over $100,000 a year are also the least religious of any earners. That seems to support his argument that work is the new elite religion. It helps his case that scholars don’t agree on a single definition of religion. If you squint, anything—from atheism to a gluten-free diet—can look like religion.

But you don’t need to invoke a new religion to make sense of the phenomenon Thompson describes. Europeans are far less religious than their American counterparts, and they work considerably less. People don’t always replace an old religion with a new one. They don’t have to replace it with anything at all. It may be that the decline of religious faith among America’s elite removed the restraints on a deep American drive to work and acquire. Without religious norms, there is little to keep the most ambitious from working all the time.

That’s exactly what the German social theorist Max Weber argued in his 1905 book The Protestant Ethic and the Spirit of Capitalism, which charted the work ethic that emerged out of the Calvinist theology that Puritans brought to this continent. Puritans saw hard work as a means of proving that they were among the elect whom God had predestined for salvation; their productivity would signal their election. Still, their religion also restrained them from working all the time. In the Massachusetts Bay Colony, Sunday was a day of mandatory rest, enforced by law. Anyone who worked was subject to a fine. Even enslaved workers were supposed to have the day off.

When society becomes more secular, those limits on capitalist striving disappear. At that point, the capitalist spirit becomes “unbridled” and, in Weber’s words, “the pursuit of wealth, divested of its metaphysical significance, today tends to be associated with purely elemental passions, which at times virtually turn it into a sporting contest.” This is an uncannily accurate picture of the work-obsessed mind in twenty-first century America. To Thompson, work is at best a form of play; at worst, “It is a diabolical game that creates a prize so tantalizing yet rare that almost nobody wins, but everybody feels obligated to play forever.” ­­

It wasn’t supposed to be this way. Citing the English Puritan theologian Richard Baxter, Weber wrote that the systematic drive to produce wealth was meant to be “like a thin cloak which can be thrown off at any time.” You work hard when you need to, but you can stop anytime, for God’s sake or otherwise. Your work doesn’t change who you are. “But fate decreed that the cloak should become an iron cage,” Weber wrote. We ended up stuck with the ethic the Puritans developed, even after we stopped believing in predestination.

The Harvard Business School alumnus who told Duhigg he was wasting his life added, “If you spend 12 hours a day doing work you hate, at some point it doesn’t matter what your paycheck says.” (This man’s paycheck says $1.2 million a year.) “He had received an offer at a start-up, and he would have loved to take it,” Duhigg wrote, “but it paid half as much, and he felt locked into a lifestyle that made this pay cut impossible.” The iron cage is lined in velvet.

Should we even care if well-educated, well-off workers are unhappy with their jobs? Aren’t other workers—like the millions who don’t even get a living wage—suffering in more immediate ways? While millionaire stock traders complain about the meaninglessness of their work, there are a thousand people in Phoenix going through repeated emotional trauma at work to keep videos of murder and violent sex off of Facebook, as Casey Newton recently reported for The Verge. To get through the day, employees of Cognizant, which contracts with the social media giants, have sex in the stairwells and smoke pot during breaks. They become paranoid; one brought a handgun to the office, fearing disgruntled former employees. All this, and they earn less than $30,000 a year.

Elite attitudes toward work have disproportionate impact, though. Weber’s study observed that in Germany, Protestants tended to occupy the capitalist class; laborers were more often Catholic. In his eyes, culture changes from the top down. That’s true in our age, too. The “do what you love” ethos that began with the creative class has become a norm for house cleaners and supermarket cashiers, as Miya Tokumitsu has shown.

If we saw work less as a way to prove one’s worth, we might value it more as an economic endeavor.

If we saw work less as a way to prove one’s worth or moral virtue, or a place to find “meaning,” then we might begin to value it more as an economic endeavor. And if the people who are drawing great material benefit from our work culture also hate it, then maybe they will feel moved to use their economic and political power to change it for the better. To do so, elite workers can look once again to the religions that once kept capitalism in check. American Protestantism may have gotten us into our current work obsession, but it and other religions—their practices adapted, perhaps, to secular tastes—also offer a way out.

Theology puts work in a cosmic perspective. In the book of Genesis, labor is a consequence of human sin, not a means to prove human righteousness. Even God rests from work on the seventh day. When Jesus calls his followers, he pulls them away from their ordinary jobs as fishermen and tax collectors. He teaches them to “look at the birds of the air; they neither sow nor reap nor gather into barns, and yet your heavenly Father feeds them. Are you not of more value than they?” He heaps woe upon the rich and shows favor to the idle poor.

Religious observance interrupts the workday or workweek. For most Muslims, prayer is obligatory five times a day, which usually requires breaks from work. (Newton reported that Muslim workers at Cognizant complained they were not allowed to pray during the nine minutes of “wellness time” the company allows per day.) The Jewish Torah prohibits working on the Sabbath, which the rabbi and activist Abraham Joshua Heschel has described as the person’s break from “the betrayal in embezzling his own life” during the workweek. To enter into the Sabbath, he wrote, someone “must say farewell to manual work and learn to understand that the world has already been created and will survive without the help of” human labor.

You don’t necessarily have to go to church or mosque or synagogue to put rituals like this in place. It’s possible to create secular versions of them. You could treat the weekend for the purpose that the labor movement intended, as two consecutive work-free days. You could even submit to an ascetical regimen to free yourself from the yoke of work. New York Times business columnist Kevin Roose recently underwent a 30-day tech detox, which included a weekend retreat to the Catskills without his phone. He was frustrated at times. “But mostly, it was great,” he wrote. “For two solid days, I basked in 19th-century leisure, feeling my nerves softening and my attention span stretching out.” He now has the zeal of a convert: “You have to try it.”

But countercultural rituals don’t work as well if you’re attempting them alone. Without a community to share them with, you’re just that one coworker who’s not up to speed, or that weird friend whom no one can get a hold of on the weekend. Regardless of the practice you undertake, something other than work needs to be sacred, so that your job can be profane. If Americans can learn to think of work in less lofty terms, then we might begin to appreciate its material value—wages, benefits, time off, pensions—and lessen the agony it brings. Together, we can find more fulfilling ways to spend our lives.

Jonathan Malesic is a writer in Dallas. He is currently working on a book about burnout.