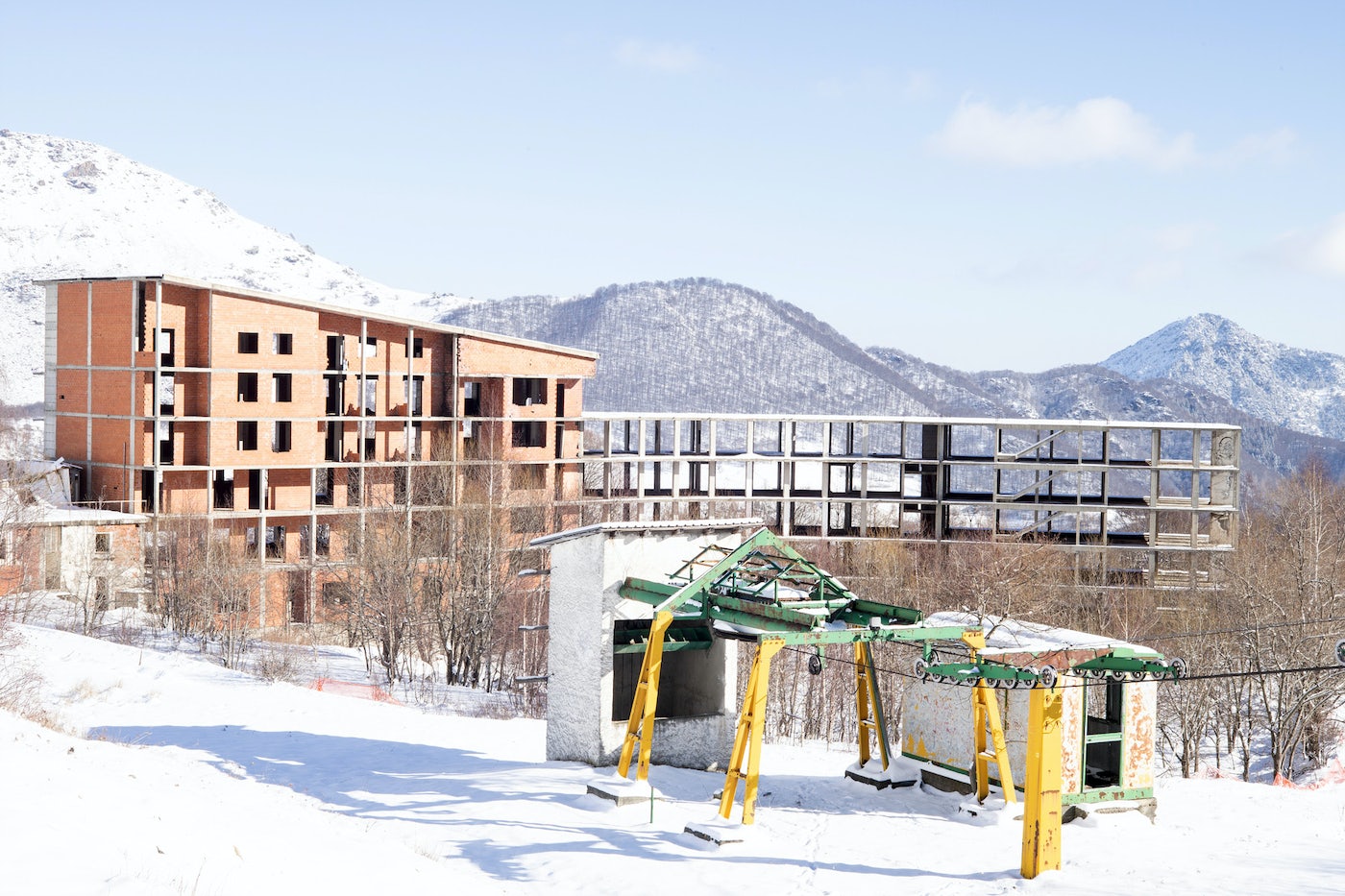 Photographer Tomaso Clavarino has been traveling to Italy’s Alpine glaciers to ski since he was three years old. “It’s a place I know very well,” he told me over the phone. “It’s how I knew it was changing.”

About five or six years ago, he started noticing that small ski resorts were shutting down, and the big ones were getting more expensive. Artificial snow, once a last-ditch solution for an unlucky ski season, was starting to become common. And the people whom Clavarino used to see every year—whether they were tourists, or locals operating small businesses in the area—were slowly vanishing.

Seeking answers, the photographer started to speak with researchers across northern Italy. “They all said the same thing,” he said. “Climate change is affecting the Alps more harshly than other places.” While the planet as a whole has warmed about 1° Celsius because of greenhouse gas emissions, average temperatures the Alps have risen just under 2° Celsius. Since 1960—when the Alps first began to be exploited by ski-oriented tourism—the average snow season there has shortened by 38 days.

Because of this warming and other factors, there are now almost 200 abandoned ski resorts in the Italian Alps: cemeteries of steel cables, concrete, parking lots, abandoned hotels, and deforested slopes. That number stands to rise. If greenhouse gas emissions continue unchecked, the Alps will lose 90 percent of their remaining glaciers by 2100, according to a recent study published in The Cryosphere.

Ice isn’t all that the region stands to lose. As the tourism economy has suffered, so have the residents who depend on it—and they’re reluctant to leave in search of opportunities elsewhere. “Of course it would be better for them to live in another place,” Clavorino said. “But they have their roots there. They don’t want to cut their roots.”

Clavarino’s images of these near-abandoned places, and the people who remain there, are not simply mementos of a dying region. They’re a warning to the rest of us about the economic and human toll to come as our planet warms.

An abandoned snow machine sits at the Alpe Bianca ski resort, located at the foot of the Italian Alps. The ski resort closed in 1995.

Clockwise from top left: Arianna Versione works at Pizzeria Aquila, which is owned by her father Giuseppe Versino, right. The pizzeria is the only business left in the area. Giuseppe also owned a local ski resort, Alpe Colmbunio, which closed in 1994.

Mauro Berera is the last inhabitant of San Giacomo, in Lombardia. He used to be the owner of a ski rental shop. But with the closure of the nearby Brembana Ski Resort, that business is now dead. He now makes a living renting sleds to tourists during weekends.

Renzo Pinard is the former mayor of the Alpine village of Chiomonte, located near the French border. He owns the Belvedere Hotel at Pian del Frais, a ski resort in Susa Valley, not far from where the 2006 Olympic winter games were held. The resort this year did not open due to the lack of snow and bureaucratic problems. He is one of the few people still living permanently in Susa Valley.

A chairlift cemetery in the former ski resort of Recoaro Mille, located in the northeast province of Venice.

The top of the former Recoaro Mille ski lift, closed in 2017. “Closed due to the end of the season,” the sign says.

Left: A recently built complex of residential apartments at the San Simone Ski Resort shuttered in 2017 due to bankruptcy. Right: a former control room for ski lifts at the Paularo ski resort in the northeast of Italy, near the Dolomites.

Left: the interior of San Giacomo ski rental, which was open only on weekends and rented only sleds and no skis during the 2019 season. Right: an unused ski lift at the Alpe Giumello Resort in Lombardia in January. The resort did not open until February due to lack of snow.

The former mid-station of the chairlift at the Alpe Colombino Ski Resort, which closed in 1994.

Tomaso Clavarino is a documentary photographer based in Italy.