The late justice dismantled originalism in his dissent in District of Columbia v. Heller, the landmark gun-rights case. 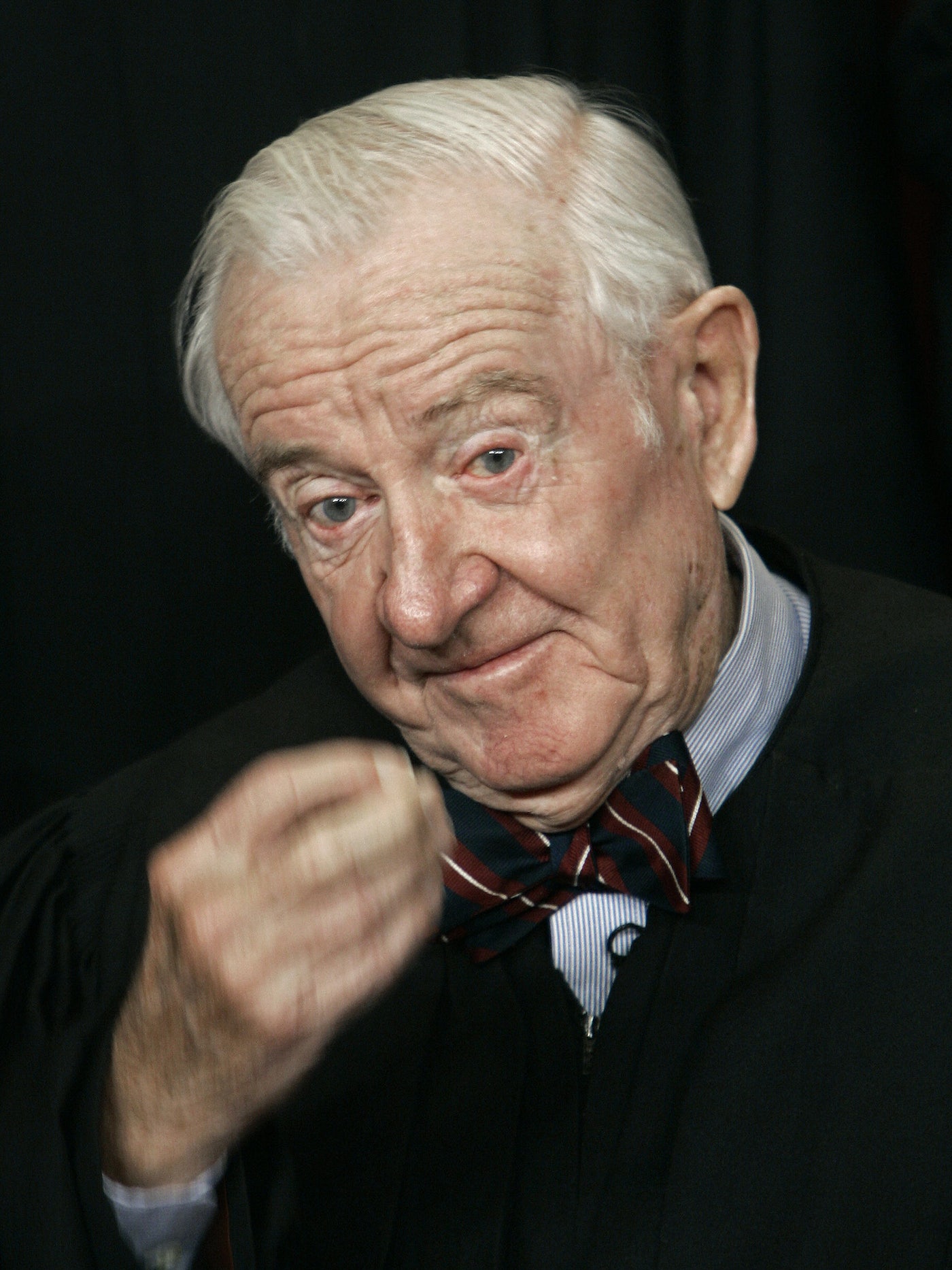 John Paul Stevens, who died on Tuesday, served on the Supreme Court for 35 years. His tenure, the second-longest in the court’s history, placed him in the middle of the great legal controversies of the late twentieth and early twenty-first centuries: on abortion and gay rights, Bush v. Gore and campaign finance, federalism and the death penalty. To Stevens, however, one of the court’s rulings stood out beyond all others.

“District of Columbia v. Heller, which recognized an individual right to possess a firearm under the Constitution, is unquestionably the most clearly incorrect decision that the Supreme Court announced during my tenure on the bench,” he wrote in The Atlantic in May. In 2008, Stevens wrote the principal dissent in the 5–4 decision, strongly arguing that the Second Amendment only protected a collective right to bear arms as part of militia service. The majority, led by Justice Antonin Scalia, concluded otherwise.

Heller was a watershed moment for originalism, a school of legal interpretation that generally argues that the Constitution’s provisions should be interpreted according to their original public meaning. Scalia, one of the early originalist apostles, wielded an array of historical and legal sources to find an individual right to bear arms in the amendment for the first time. With five originalist-minded jurists now sitting on the high court, Stevens’s rebuttal is more salient than ever.

Before Heller, the Supreme Court had never considered whether the Second Amendment protected an individual right to bear arms. Then again, it had only heard a handful of Second Amendment cases in its two-century history, and its decisions were hardly exemplary. The court’s 1876 ruling in U.S. v. Cruikshank, where it held that the Second Amendment did not apply to the states, hamstrung federal efforts to protect black freedpeople in the South from white supremacist terrorism. In 1939, the justices issued a perfunctory ruling in U.S. v. Miller that the amendment did not protect sawed-off shotguns because they were not “ordinary military equipment.”

Federal courts interpreted those cases, especially Miller, to uphold state and federal laws restricting gun ownership. Conservative legal activists began to challenge that stance in the 1990s and 2000s, arguing instead that the amendment protects an individual right to keep and bear firearms. In 2008, they supported D.C. resident Dick Heller’s appeal to the Supreme Court. Heller, a local special police officer, asked the justices to overturn the district’s decision to deny him a license to keep a handgun in his home for personal defense.

The text of the Second Amendment itself is relatively brief: “A well regulated militia being necessary to the security of a free state, the right of the people to keep and bear arms shall not be infringed.” To Stevens, the first part unambiguously defined it as a collective right, not an individual one. “It confirms that the Framers’ single-minded focus in crafting the constitutional guarantee ‘to keep and bear arms’ was on military uses of firearms, which they viewed in the context of service in state militias,” he wrote in his Heller dissent.

To support his point, Stevens also looked to debates during the ratification of the amendment, where discussions of the militia focused on military service instead of individual ownership. “The history of the adoption of the Amendment thus describes an overriding concern about the potential threat to state sovereignty that a federal standing army would pose, and a desire to protect the States’ militias as the means by which to guard against that danger,” he wrote. “But state militias could not effectively check the prospect of a federal standing army so long as Congress retained the power to disarm them, and so a guarantee against such disarmament was needed.”

Scalia cited a multitude of historical precedents on how English legal scholars understood the Stuart kings’ power to restrict who could bear weapons and serve in militias, which would have informed the Framers’ understanding. “That history showed that the way tyrants had eliminated a militia consisting of all the able-bodied men was not by banning the militia but simply by taking away the people’s arms, enabling a select militia or standing army to suppress political opponents,” he concluded. “This is what had occurred in England that prompted codification of the right to have arms in the English Bill of Rights.”

It’s not unusual for judges to look to English history when interpreting the Constitution. Stevens argued that it was a poor fit for this case. “The Court may well be correct that the English Bill of Rights protected the right of some English subjects to use some arms for personal self-defense free from restrictions by the Crown (but not Parliament),” he explained. “But that right—adopted in a different historical and political context and framed in markedly different language—tells us little about the meaning of the Second Amendment.”

Stevens also kept returning to the text of the amendment itself, which he argued sat in contradiction to Scalia’s reading of it. “Without identifying any language in the text that even mentions civilian uses of firearms, the Court proceeds to ‘find’ its preferred reading in what is at best an ambiguous text, and then concludes that its reading is not foreclosed by the preamble,” he countered. Stevens pointed to some state declarations of rights during the founding era that used similar phrasing to more specifically refer to militia service, as well as some that used different language when focusing on private firearm ownership.

Scalia pointed to post-ratification sources as well, including Reconstruction-era lawmakers who described the right to bear arms in terms of black freedpeople’s ability to defend themselves. In Scalia’s eyes, “it was plainly the understanding in the post–Civil War Congress that the Second Amendment protected an individual right to use arms for self-defense.” But Stevens pointed out two flaws in this approach. “All of the statements the Court cites were made long after the framing of the Amendment and cannot possibly supply any insight into the intent of the Framers,” he noted. What’s more, he added, “all were made during pitched political debates, so that they are better characterized as advocacy than good-faith attempts at constitutional interpretation.”

Stevens closed out his dissent with concern about the ruling’s impact on public efforts to rein in gun violence. “The Court would have us believe that over 200 years ago, the Framers made a choice to limit the tools available to elected officials wishing to regulate civilian uses of weapons, and to authorize this Court to use the common-law process of case-by-case judicial lawmaking to define the contours of acceptable gun control policy,” he wrote. Stevens’s reading of the amendment itself and the historical material surrounding it said otherwise.

In his Atlantic article in May, the former justice lamented his inability to persuade justices Anthony Kennedy and Clarence Thomas to adopt his view. He also regretted the impact of the majority’s reasoning on efforts to curb gun violence. “Their twin failure—first, the misreading of the intended meaning of the Second Amendment, and second, the failure to respect settled precedent—represents the worst self-inflicted wound in the Court’s history,” he wrote earlier this year. “It also represents my greatest disappointment as a member of the Court.”

He did not give up the fight in retirement. In 2014, he published a book proposing six new amendments to the Constitution. One of them would nullify Heller by more explicitly limiting the Second Amendment to militia regulations. After the Stoneman Douglas High School massacre last year, he went even further. “Overturning [Heller] via a constitutional amendment to get rid of the Second Amendment would be simple and would do more to weaken the N.R.A.’s ability to stymie legislative debate and block constructive gun control legislation than any other available option,” he wrote in a New York Times op-ed.

It’s worth noting how unusual this language is from a retired Supreme Court justice. Ex-presidents tend to become elder statesmen. Lawmakers enter the private sector after leaving Congress. But former justices tend to keep quiet, at least on the Court’s subsequent rulings—and especially on their former colleagues. Sandra Day O’Connor turned her attention to civics education. David Souter retired to a private life in New Hampshire. There are exceptions, such as in 1990 when Lewis Powell renounced his ruling in McCleskey v. Kemp and the death penalty itself. But they almost never go beyond that.

Stevens redefined the role. Justices interpret the Constitution without literally changing it. He adopted a new place in American constitutional discourse, one where retired justices can use their platform and prominence to urge Americans to think about their foundational document in new ways. He didn’t succeed in convincing the court to recognize the flaws in Scalia’s reasoning. But he may have paved the way for the American people to find it themselves.

Matt Ford is a staff writer at The New Republic.