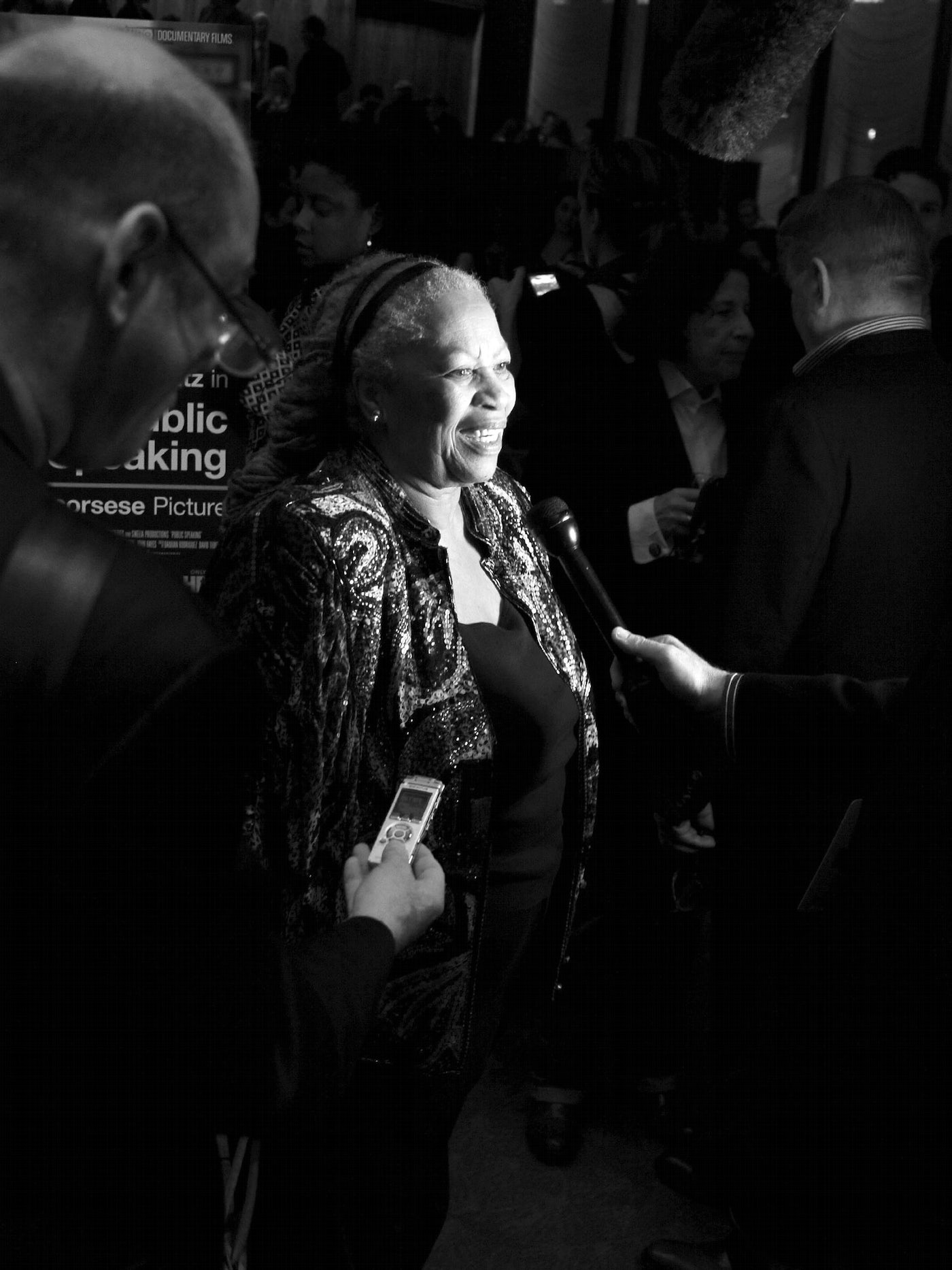 Last week, in celebration of Herman Melville’s 200th birthday, The New York Times dug into its archives to reveal that Melville was so obscure when he died that the paper misspelled his most famous book (“Mobie Dick”) in his obituary. It was only many decades later that the times caught up to Melville, that he became known as the first great American novelist, an appellation that, for better or worse, has presided over our discussions of American literature ever since.

The story of Toni Morrison could not be more different. Her debut novel, The Bluest Eye (1970), made an immediate impact, landing with all the subtlety of a meteor, if a meteor could come from one’s own planet. She was a major writer from the start, and when she was awarded the Nobel Prize in Literature in 1993, she seamlessly became the living legend for whom such awards are reserved. Yet there is a sense, for all the accolades she won and the fame she wore so lightly, that the times had not fully caught up to Morrison either.

Morrison’s death showed the ways in which American culture has changed. Like Faulkner, her influence and perhaps her only true rival in twentieth-century American letters, she wrote primarily of the long fallout from this country’s original sin of slavery—except, as a black woman, she did it from the opposite perspective. It is precisely this perspective that, from our vantage point in the year 2019, makes her work more sweepingly American than any other. We asked four writers to describe the various facets of one of the greatest of American novelists.

When I was a teenager reading The Bluest Eye, I remember the novel pushing me to interrogate so much of what I had internalized from this country—about my own self-worth, about what sort of life was possible for a black child born in the South. Things were different then. The project of suppressing the story of racism in this country—and replacing it with ahistorical narratives that obscured the truth—was more entrenched than it is now. I did not have the language to name what I was seeing, how I was feeling. I was trapped in a paralysis of confusion. Morrison gave me, and so many others, that language. She was among the first to arm me with the ability to understand that so much of what this country had taught me about myself, what it had taught me about my people, was a lie.

Morrison laid the foundation for generations of black writers that followed. She rejected the idea that being black or being a woman might hinder her appeal. In a 1987 interview with The New York Times, Morrison said, “I really think the range of emotions and perceptions I have had access to as a black person and as a female person are greater than those of people who are neither.... So it seems to me that my world did not shrink because I was a black female writer. It just got bigger.”

Morrison is gone now, but she indeed made the world bigger. She opened up the possibilities of how one might make meaning of the world. She showed us that we could tell our stories, and that they could matter; and that even in our silence, our voices would be heard.

[Read more of Clint Smith’s piece “The Sound and the Silence of Toni Morrison” here.]

It wasn’t any of Toni Morrison’s acclaimed novels that served as my introduction to her work, though I knew eventually I would need to read them if I was at all serious about calling myself a writer. Even so, it took me an embarrassingly long time to read Beloved. I started with Song of Solomon, then followed it up with The Bluest Eye, Tar Baby, and Sula, all within the span of a few years.

But before I got to any of that, my freshman English professor assigned us her essay “A Slow Walk of Trees (as Grandmother Would Say), Hopeless (as Grandfather Would Say),” which first appeared in The New York Times Magazine in 1976. It remains one of my favorite essays, and stands as evidence that Toni Morrison was—I know, in my head, she is no longer with us, but I had to pause before writing “was”—not just America’s greatest novelist, but one of its foremost essayists, cultural critics, social philosophers, and political analysts. She captured the American condition better than most anyone who has tried, because she wrote to and cared for the people subject to the worst of this country’s impulses. She was not devoting time “speaking truth to power” so much as she was writing to remind black people that we could stand in our own.

There is a piece of that essay I carry with me, which has been the basis for the questions I ask in my work, where Morrison writes: “There is repetition of the grotesque in our history. And there is the miraculous walk of trees. The question is whether our walk is progress or merely movement.” I continue to wrestle with the paradox of the first two sentences, while the last is where I find the most tension in being a critic today. It’s difficult to discern progress from mere movement when the latter is celebrated as though it is revolution.

Wherever I come down, I know I am only ever working with the tools that Toni Morrison provided to make such a decision. The force of her intellect and talent quickened the pace of the trees.

A profound influence on history

Toni Morrison revolutionized American letters. As a writer of fiction, she crafted language with plot with society with history in a totally original fashion to illuminate the possibilities of literary imagination. As a social critic, she crossed some of those same boundaries to liberate race and sex to show us how to read the structures of meaning within which we cannot help thinking. And as a figure within American literature, she engaged the fundamental structures of discourse as both artist and mentor. Now Toni Morrison belongs to American history, a history she influenced profoundly. For all she has done and all she represents, we owe her a very great debt.

A brilliant scholar, too

Morrison is rightly famous for her novels, but her contributions to academia are relatively overlooked. Her book Playing in the Dark: Whiteness and the Literary Imagination (1992) is perhaps the foundational text for modern whiteness studies—the interdisciplinary academic field whose scholars study the way white people engage with and deploy their racial identity to shape the world around them.

“I was interested,” Morrison writes in the book’s preface, “as I had been for a long time, in the way black people ignite critical moments of discovery or change or emphasis in literature not written by them. In fact I had started, casually like a game, keeping a file of such instances.” This kind of approach, fusing literary criticism with social science, is classic academic-Morrison: Her methods are exacting and precise, but her drive comes from an authentic love of ideas.

And what ideas they are. In Playing in the Dark, Morrison focuses on American literature of the nineteenth and twentieth centuries, to consider the effect of race on the nation’s imagination. Is race a metaphor? A social phenomenon? The catalyst for American literary individualism? It’s a heavy lift, but Morrison writes that she wanted to “draw a map, so to speak, of a critical geography and use that map to open as much space for discovery, intellectual adventure, and close exploration as did the original charting of the New World—without the mandate for conquest.”

She makes scholarship sound like play, while articulating tough problems in intellectual history in a generous, collaborative tone. And that word from her preface, “ignite”: It works like an invitation to the reader, a little suggestion that you, too, could burn with Morrison’s fire.

Ryu Spaeth is the features editor of The New Republic. He also edits Critical Mass.

Clint Smith is a writer and a Ph.D. candidate at Harvard University. He is the author of the poetry collection Counting Descent (2016), and his debut nonfiction book How the Word Is Passed is forthcoming from Little, Brown.

Mychal Denzel Smith is the author of Invisible Man, Got the Whole World Watching, and the forthcoming Stakes is High.

Nell Irvin Painter is the Edwards professor of American history, emerita, at Princeton University, where she directed the Program in African American Studies. She is the author of numerous books, including The History of White People, Standing at Armageddon: A Grassroots History of the Progressive Era, and Creating Black Americans.