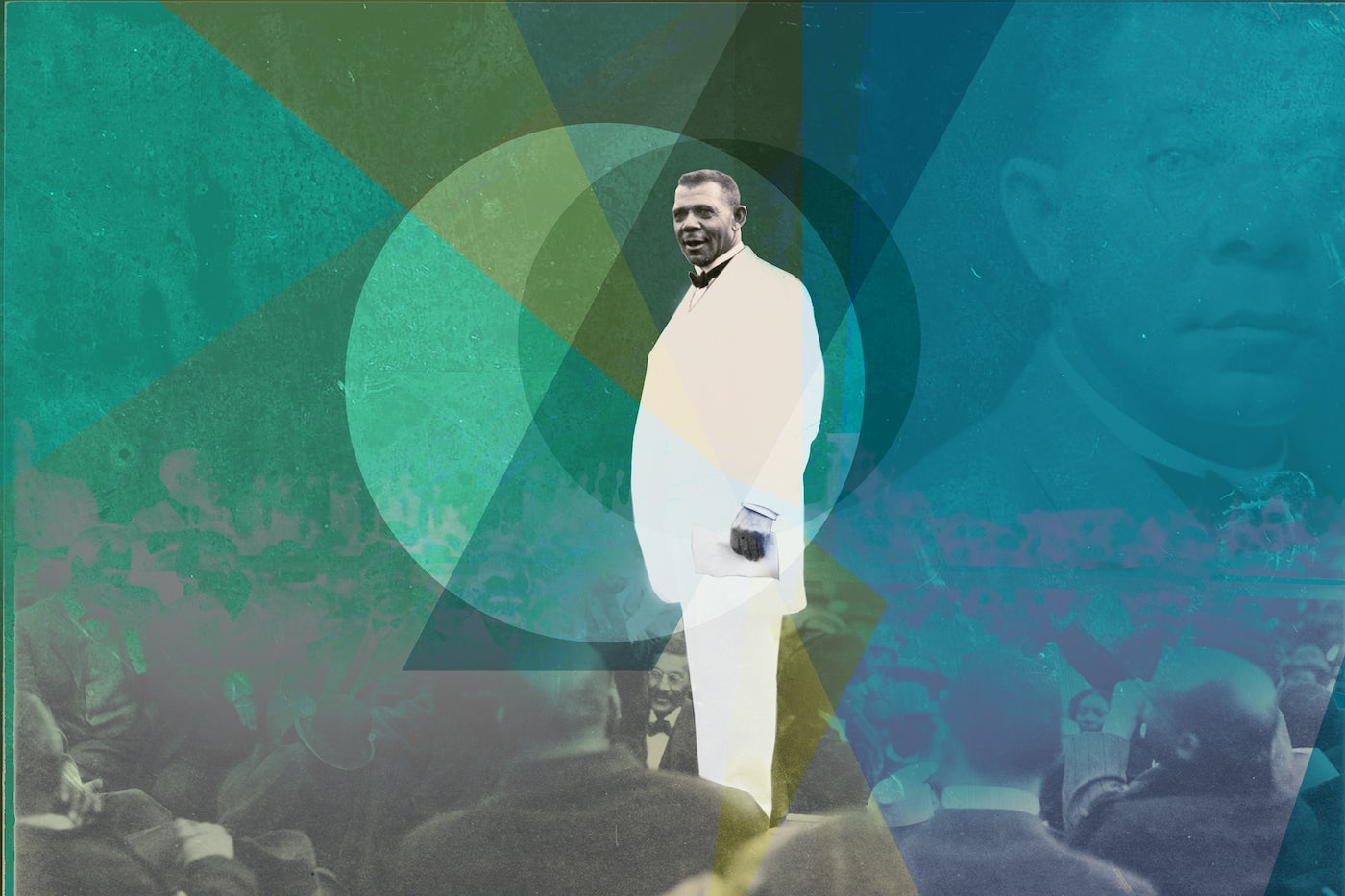 On September 18, 1895, Booker T. Washington gave his famous address to the Atlanta Cotton States and International Exposition. Washington declared before this regional business gathering his acquiescence in the name of the black Southern population to the new regime of almost total black disfranchisement and the abrogation of civil rights within a social, political, and economic order based on explicit racial subordination. The speech offered the architects of the new segregationist order a beguiling metaphor to rationalize their efforts; the races would now work, Washington vowed, “separate as the fingers … one as the hand” in the restlessly improving spirit of free enterprise. He also exhorted black and white Southerners to “cast down your buckets where you are” in the region—an appeal that offered white employers tractable, low-wage black labor and consigned blacks to the most humble opportunities that racial subordination relegated to them.

Washington’s rise to singular prominence as a laissez-faire–minded collaborator with segregation is by now well documented. In debates with other black racial advocates of the time regarding ways forward—the importance of maintaining the franchise and civil rights, broad liberal education, etc.—Washington focused on the accumulation of property and wealth within the boundaries imposed by the regime of white supremacy.

It bears reminding, for example, that Washington and his best-known adversary on this latter question, W.E.B. Du Bois, were not antagonists at the time of the “Atlanta Compromise” speech. Their disagreement over racial strategy—whether to protest open racial subordination or accommodate and find ways to operate within it—had not yet taken shape in 1895, and wouldn’t become a public breach until several years later. Like many in their stratum of would-be race spokesmen and spokeswomen, in the 1890s both men accepted the premise that the black freedpeople were a “child race” in need of tutelage. Even Du Bois’s argument for the franchise in The Souls of Black Folk in 1903 was premised on the belief that a chief effect of the vote would be to ratify racial leadership by “men of skill, men of light and leading, college-bred men, black captains of industry, and missionaries of culture; men who thoroughly comprehend and know modern civilization, and can take hold of Negro communities and raise and train them by force of precept and example.”

Nor was Washington the first person in modern African American life to assume the role of Race Ventriloquist—a self-empowered advocate of strategic compromise seeking to sacrifice blacks’ citizenship rights in the name of one definition or another of “racial peace.” Five years before Washington’s Atlanta speech, Isaiah T. Montgomery, founder of the all-black town, Mound Bayou, Mississippi, was the only black delegate to the 1890 Mississippi Constitutional Convention. That infamous body disfranchised the state’s black population and installed white supremacy as the foundation of Mississippi’s legal structure. Montgomery, like Washington, disparaged political activism for blacks other than himself. In 1890, he not only was a convention delegate; he also served on the committee that disfranchised black voters, and he voted for and endorsed disfranchisement from the convention floor. In that address, he purported to lay “the suffrage of 123,000 of my fellow-men at the feet of this Convention” as an “olive branch of peace.”

Articulate black Mississippians were outraged at Montgomery’s hubris in speaking for the state’s black population without a single proxy—much as the black Atlantans who boycotted the segregated Cotton States Exposition were appalled to learn afterward that Washington had been similarly presumptuous in professing to barter away their rights.

Scholarly discussion and political argument about Bookerism have accordingly divided up prominent black political figures between those who advocated protest against or accommodation to racial subordination during what is often called the Age of Washington—roughly 1895–1915. Thereupon, today’s commentators adjudicate the merits of each disposition, with those inclined to defend Washington relying on some variation of “you had to be there.” At the same time, most participants in subsequent assessment of the early–twentieth-century controversy accept the nominal race leaders’ premise that they were in fact contending over the totality of possibilities for black Americans’ pursuit of justice and equality.

The deeper and longer-lasting significance of the Bookerite moment, however, is that it distilled the social perspectives and aspirations of a rising black middle class. Only the freed population’s more cultivated racial brethren were in a position to show the majority of black freedpeople how to participate effectively in modern political-economic and social life. And part and parcel of that instruction was the central dogma of social and racial peace, holding that the interests of capital and labor were intrinsically harmonious, and that black and white upper classes were natural allies in organizing and directing the uplift of the black masses.

In this racialist vision, blacks disappeared in all spheres but their racial classification. Their concerns and interests as farmers, students, laborers, or teachers were dissolved into a political project of “race relations”—which, as historian Michael R. West has noted, displaced consideration of blacks’ citizenship rights in favor of the facile question of how the “races” interacted. The race relations notion underwrote a politics of “race adjustment,” in the parlance of the time, which was in turn predicated on black and white elites’ collaborating so as to lay out an etiquette of proper conduct and marginal advancement for black Americans within a framework of unchallenged class power and prerogative.

This politics presumed that the general black population was civically mute. And it’s instructive in this regard to note that Bookerism—the accommodationist ideology that Washington enshrined in the founding of his influential Tuskegee Institute—arose only in the context of mass disfranchisement, as well as through the prior defeat of the Populist insurgency, which posed the greatest threat to Southern ruling class power, via a new alliance of black and white workers and farmers in the last decades of the nineteenth century. After detailing the political-economic and class dynamics that took shape among black and white Southerners in the 1880s and 1890s, the late historian Judith Stein pointed out these crucial dynamics in an appraisal of Bookerism that remains the most powerful account of race and class politics in that period: “Without understanding the fear engendered by Populism, we cannot understand why the ruling class elevated Washington and tried to strengthen his power among blacks.” Although it appears to many twenty-first–century writers that white workers’ and farmers’ commitments to an abstract white supremacy overrode their inclinations to align with blacks around issues of mutual interest, the rise of Jim Crow was very much a panicked authoritarian crackdown executed by the remnants of the white plantocracy, aimed at undercutting and preempting cross-racial solidarity in the lower orders of the post-Confederate political economy. Indeed, the ruling classes in both the North and South were sufficiently alarmed at the prospect of a biracial coalition of workers and farmers to undertake serious measures to thwart or preempt it. Stein continues:

While planters and industrialists generally agreed upon naked force as the weapon against black militancy, it was the capitalists who pioneered in the encouragement of the Tuskegee approach because they had greater need for it. Washington’s promises of industrial peace were welcomed by capitalists throughout the country and by the beleaguered President Cleveland, who sent Washington his congratulations.

The big takeaway here is that what Bookerism propounded as a “natural” race politics was instead the politics of a particular class. The perspective holding that generic racial identity is the foundation of black Americans’ political experience is actually rooted in the worldview and aspirations of an emergent black elite. And that elite’s substantive agenda was what literature scholar Kenneth W. Warren describes as “substitution of black professionals, managers, and intellectuals for their white counterparts within those institutions charged with administering to the needs of black populations.” Warren pithily characterizes the goal of this elite politics as the establishment of “managerial authority over the nation’s Negro problem” first and foremost, without regard to the nature of the prevailing political and economic order.

It’s vital, in other words, to recognize that the politics of racial representation was from the first a class politics—one in which actual black people disappeared as little more than a communitarian abstraction. Once this dramatic cleavage was effected, the interests of the black majority could be confidently ventriloquized by an emerging stratum of race relations administrators, who were also aligned with and embedded as minions of ruling class power. That politics came under pressure via the reemergence of a black mass politics during the three decades encompassing the New Deal and the Great Society—until, as I will show in a follow-up column, the black elite’s rule as mediators of “race relations” was restored in the wake of the victories of the civil rights movement by the convulsions of socioeconomic change in the 1970s.

Adolph Reed Jr. is professor emeritus of political science at the University of Pennsylvania.