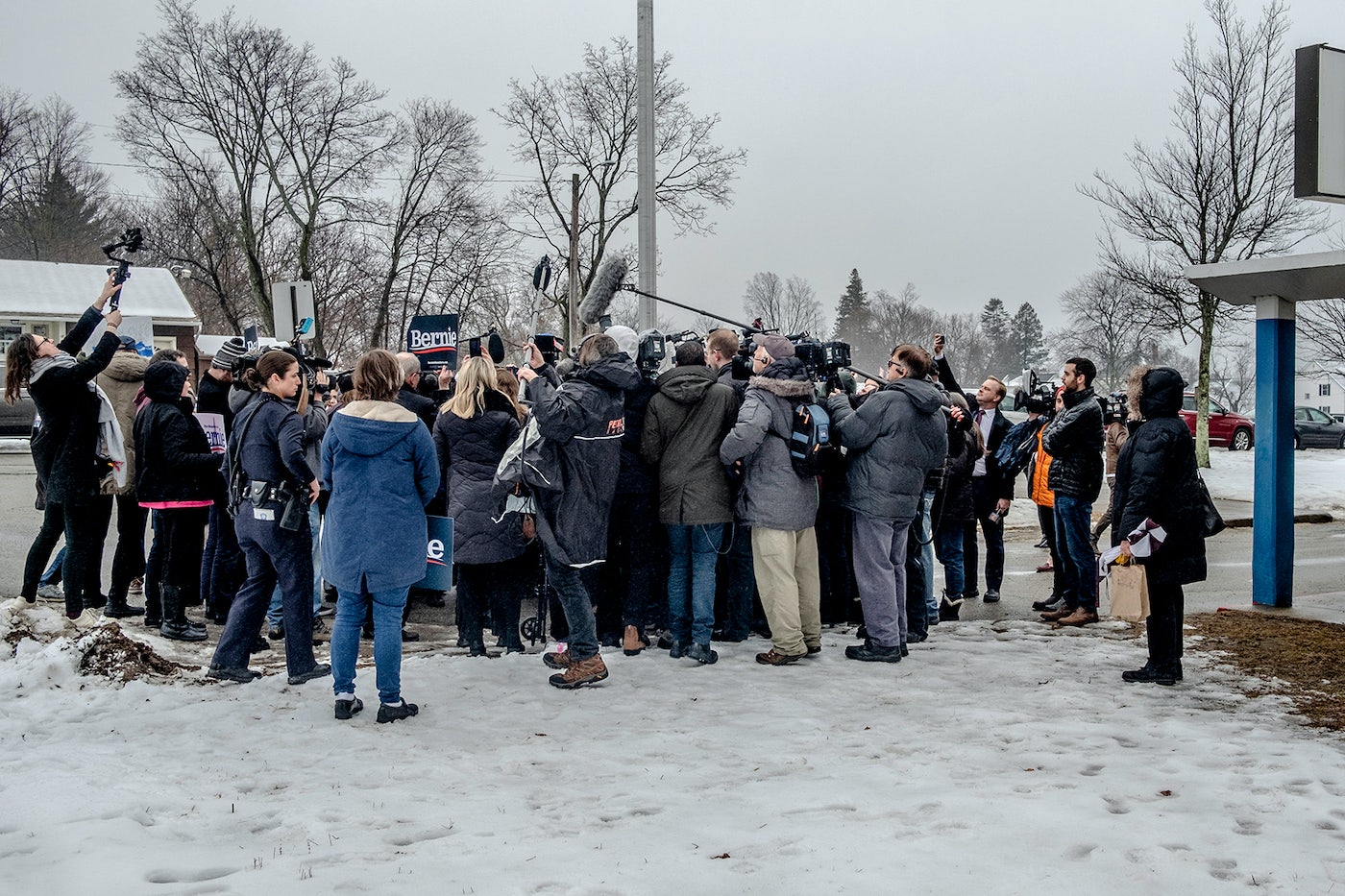 Photograph by Jordan Gale for The New Republic

Like compulsive gamblers who react to every losing streak by changing their betting strategy rather than quitting outright, political handicappers adjust to every stunning campaign development by unapologetically peddling new certainties.

Normally, the stunning collapse of Joe Biden and Elizabeth Warren in the New Hampshire primary would have inspired a burst of humility. TV pundits had been calling the former vice president the front-runner for months, and Warren was last summer’s smart-money favorite. But instead of admitting their mistake in singling those candidates out, the TV handicappers and newspaper analysts are now actively promoting new theories about the field.

Wednesday morning brought ludicrously overconfident headlines like this one from NBC News: “Bernie Sanders is now the front-runner. And moderates may be too divided to stop him.” The McClatchy Washington bureau went with a similar morning-after headline: “Sanders emerges as the Democratic frontrunner—but don’t expect the race to end soon.”

To use a line that Ronald Reagan employed to devastating effect in his 1980 debate with Jimmy Carter: “There you go again.”

All the evidence so far suggests that 2020 has become a Democratic primary race like no other in history. But there is this irresistible temptation in the media to constantly titillate viewers and readers with new forecasts. The root cause is more than just the drive for TV ratings or web clicks, although that, of course, plays a role. The larger problem is that too many campaign analysts suffer from a constant need to prove that they are smarter and more plugged-in than amateurs watching at home.

Bernie’s share of the New Hampshire presidential primary vote (26 percent) is the lowest victory margin for a Democrat in the state in more than 60 years. After Iowa and New Hampshire, Sanders trails Pete Buttigieg in the delegate count. But on the basis of Sanders’s recent lead over the fast-deflating Biden in a few national polls, the media has garlanded the Vermont socialist with the title “front-runner.”

Remember, there is no such thing as a national primary.

Half the New Hampshire primary voters decided in the last few days, according to the exit polls. Anecdotally, there were many stories of voters making their choices in the car on the way to their polling places. With Democrats feeling this mercurial, no one should have the temerity to project what will happen in the South Carolina primary on February 29 or in the 14 states that head to the polls in the Super Tuesday contests on March 3.

The February 22 Nevada caucuses are even more problematic. After the caucus crackup in Iowa, the Nevada Democratic Party has, at the last minute, switched to paper ballots that will be fed into scanners. But any problems with vote counting will all but invalidate the results—and guarantee that the Democrats will never again schedule caucuses to pick convention delegates.

If 2020 has taught us anything, it is that George Bush was right, in 1980, when he bragged about the “Big Mo” after winning Iowa. For all the talk of campaign organization, for all the gimlet-eyed analysis of fundraising totals, nothing in politics matches a late-breaking burst of enthusiasm.

There is no precedent for an underdog candidate going from a fifth-place finish in Iowa to scrapping for the lead in New Hampshire to suddenly being taken as a serious contender for the nomination. But that’s what Amy Klobuchar did after winning 24 percent of the late deciders in New Hampshire, second only to Buttigieg’s 29 percent among the same group, according to exit polls.

If I squint, I can see a bit of a parallel to Gary Hart in 1984. He used a surprising second-place finish in Iowa to vault over former Vice President Walter Mondale in the New Hampshire primary. Heading into the Super Tuesday states that year, Hart had no organization or advance team, so he held monster rallies in empty hangars at airports as he flew from media market to media market. He eventually came close to wresting the nomination from Mondale.

Pundits have long taken it as an article of faith that Buttigieg (who, like Klobuchar, seems to be surging) has no discernible black support in South Carolina and elsewhere, based on endorsements and polls. And they have relied on numerous clichés to explain it: that African American voters are homophobic or that they have been turned off by Buttigieg’s decidedly mixed record on racial issues within the South Bend police force. Such explanations are far too glib. Now, having demonstrated that he is in the race for the long haul, the 38-year-old former Indiana mayor has a chance to hit the reset button.

Biden’s meltdown (the worst presidential-race performance by a former vice president in modern history, the hapless Dan Quayle aside) is a sad coda to the public career of an honorable man. One number from New Hampshire symbolizes Biden’s fate: Manchester, the largest city in the state, is filled with old-time Democrats who should have gravitated to Biden’s “I’m-Joe-from-Scranton” lunch-bucket appeal. Instead, Biden won less than 10 percent of the vote in Manchester, close to his paltry statewide total.

I will confess to being unprepared for Massachusetts Senator Elizabeth Warren’s equally weak performance in the New Hampshire primary. Warren finished fifth in Nashua (even running behind Biden, whom she bested statewide), in a city that abuts the Massachusetts border, despite the fact that candidates from bordering states (counting Sanders in 2020) have won five of the last seven contested New Hampshire primaries.

Part of Warren’s problem, I suspect, has been her inability to translate her compelling stump speech into shorter sound bites for debates, TV interviews, and commercials. In the room with Warren, you hear a story of an accidental senator whose career reversals (an ill-timed first marriage, a beloved job lost because of pregnancy) mirror those of many women voters. On television, Warren too often comes across as a professor who is quickly highlighting key points for the midterm.

After New Hampshire, too many political experts are warning that the Democrats are repeating the mistake orthodox Republicans made in 2016 when they failed to rally around a single candidate capable of stopping Donald Trump in the primary. I guess Buttigieg, Klobuchar, and Michael Bloomberg could all draw straws this week and anoint one of themselves the moderate standard-bearer to run against Bernie Sanders.

But unlike the Republicans, the Democrats never hold winner-take-all primaries; it will be difficult for Sanders, whose support seems to level out at 30 percent (judging from Iowa and New Hampshire) to corral the majority of the delegates he would need to win the nomination outright. And furthermore, no Democratic leader is going to replicate Republican Chairman Reince Priebus’s decision in early May 2016 to declare the GOP race over, even though Trump had yet to win a majority of the delegates.

Let me end with an appeal to my fellow campaign reporters and analysts: Let the Democratic voters decide at their own pace. In dramatic terms, 2020 is an exciting race with more zigzags than a slalom. The outcome is unknowable. The media shouldn’t keep trying to ruin things by helpfully offering “spoiler alerts” every 15 minutes.

Walter Shapiro, who is covering his eleventh presidential campaign, is a staff writer at The New Republic. He is also a fellow at the Brennan Center for Justice and a lecturer in political science at Yale.