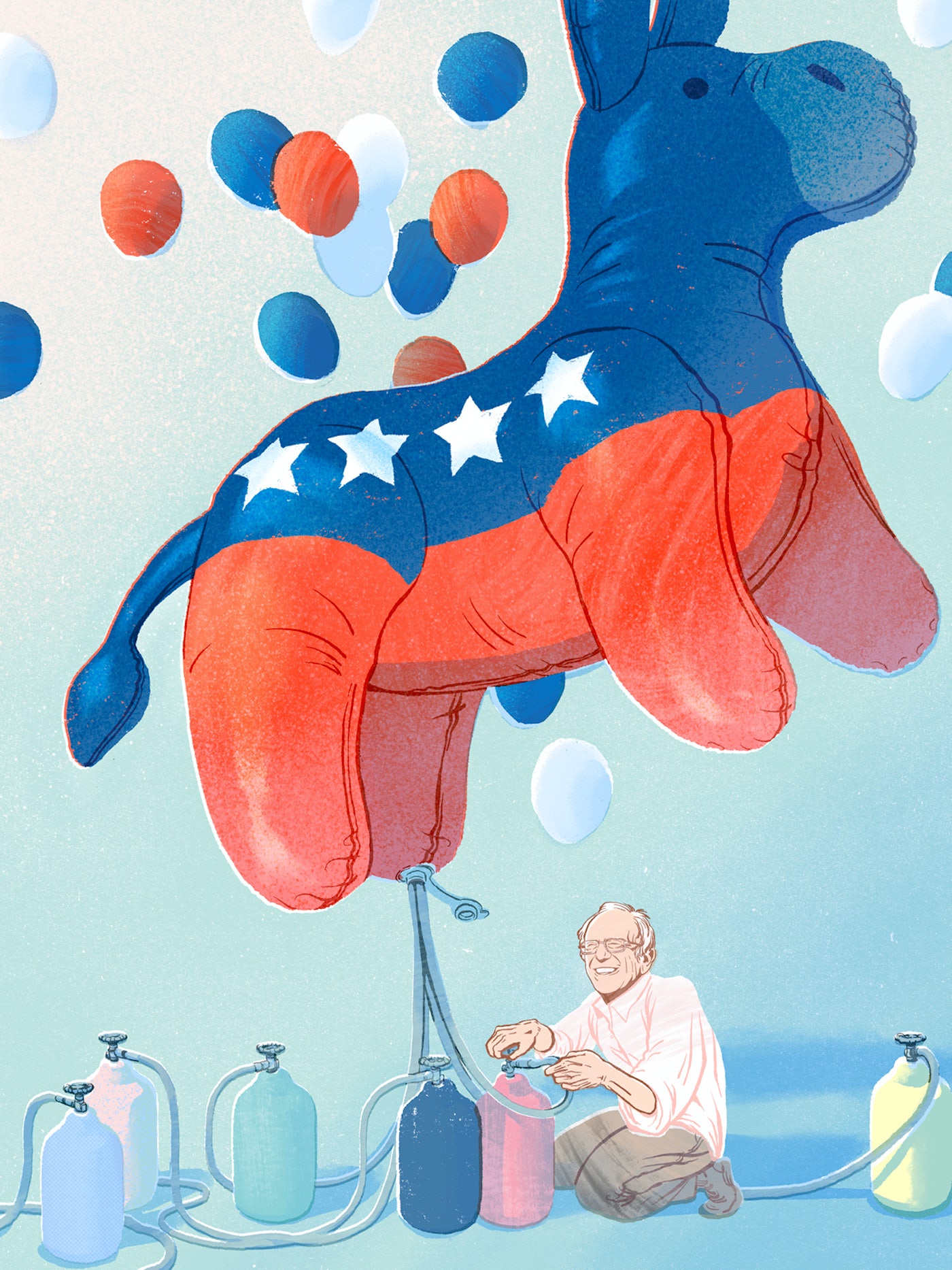 It was an exchange that illustrated the ideological consistency and moral clarity that, aided by an extraordinary campaign organization, many on the left earnestly hoped would send Sanders to the White House. But it was not enough. Bernie Sanders, barring an extraordinary turn of events, will not be the Democratic nominee, and his defeat should be a sobering one. Even as the right marches steadily toward fascism, and our institutions slide toward collapse, even as the guiding norms that have long governed contemporary politics and policymaking have dissolved into irrelevance, even as it has become obvious to more Democrats than ever that there’s no way forward or out but left, many others, and many of those suffering the most, with the most to gain from a radical change in our country’s trajectory, have sized up a true alternative to the status quo, a once-in-a-generation figure genuinely railing against the system, and said no.

As much as it might have been supposed that conditions favored Sanders, his coming up short is also a consequence of our particular moment. Rank-and-file Democrats rightly perceive the Trump presidency as an emergency, but see an answer to the challenge his administration poses not in calls for political revolution and their latent promises of further instability but in the comforting embrace of the last Democratic vice president, a man who promises to continue the legacy of the most popular figure in the party. Given this, Sanders was fated to struggle in a true two-man race, and the swiftness with which Democratic leaders and the press managed to bring that race about left the campaign little time to react.

Even so, if Sanders had been ready and able to change course, what course would he have changed to? By the time Super Tuesday came around, it was clear to most that his promise to engage young and disaffected voters at unprecedented levels was genuinely the only path to victory the campaign had seriously contemplated and invested in at the expense of a real plan to win over traditional Democratic constituencies. This is one of the ideas that have long made electoral politics a graveyard for the American left: the hope of a post-political, revolutionary campaign built on the backs of the voters most sympathetic to its cause and least likely to vote.

Bernie has come as far as he has because the Democratic center is well and truly out of ideas.

Sanders has ridden that strategy even further than he likely expected when he launched his first campaign in 2015, having managed, in the space of half a decade, to pull the Democratic Party in a more progressive direction on health care, the minimum wage, free college, and climate change without succeeding in either of his presidential campaigns. He’s come as far as he has because the Democratic center is well and truly out of ideas. Even now, as figures on the right are opportunistically jettisoning laissez-faire nostrums to own the coronavirus crisis, party leaders are struggling to move beyond a preoccupation with debt, deficits, and deservedness that has constrained liberals for generations now. All the life that remains in the Democratic mainstream—the proposals and new principles hastily adopted and adapted to fill out the candidacies of the also-rans that crowded the presidential field—has come from people and movements, including the Sanders campaign, the establishment is determined to keep on the sidelines.

To triumph electorally, the left has to devise winning strategies that suit the electorate it faces now and not one it hopes to bring into being later. That means winning over the voters over 50, suburban voters, and African Americans who were wary of the Sanders campaign. The prevailing theories about why the left has been unable to do so thus far are wrong. It’s been said repeatedly since South Carolina, for instance, that Sanders’s anti-establishment stance alienated him from ordinary Democrats, particularly black voters, less hostile to the party’s leadership. But across multiple polls throughout this cycle, Sanders has been viewed roughly as or more favorably than Biden among Democrats, and he was even competitive with him among black voters before Representative Jim Clyburn’s influential endorsement and Biden’s subsequent victory in South Carolina. This simply wouldn’t have been possible if those voters actually resented him for his attitude toward the party.

There’s little reason to believe they were turned off by the substance of his proposals either. Medicare for All has fared better than Sanders has in the exit polls from the contests that have taken place so far, and a variety of other surveys have shown that many of Sanders’s other ideas are also broadly popular among Democrats. The platform is not the problem. But the pitch might be.

As much as surveys have suggested attitudes toward socialism as a political label have softened, the results of the primaries suggest that many sympathetic to left policy have trouble believing self-described socialists are electable. More and more candidates are overcoming that hurdle, particularly in safely Democratic enclaves, but ultimately, getting voters to sign onto an agenda that empowers workers and takes on the wealthy and the forces of capital is more important than getting them to cotton to a negatively freighted word. It’s vital, too, that left candidates everywhere work to convey the true breadth of their platforms and avoid allowing any particular proposal to suffocate the discourse, lest they, like Sanders, find themselves trapped in a rote back-and-forth on the cost of Medicare for All at the expense of policy ideas in other areas that could entice even single-payer skeptics, such as expanding worker ownership and representation at major firms, a federal job guarantee, and guaranteeing free childcare and paid parental leave for American families.

As far as criticism of the Democratic establishment goes, it might be wise to frame those critiques in terms of the party’s capacity to fight against the right and Trumpism—not because the Sanders approach of calling out the establishment meaningfully hurt him, but because the Democratic electorate’s attachment to bipartisanship as an ideal should be broken down as quickly as possible. The left is fighting, candidates should insist, to bring a better Democratic Party to political hegemony, a party that will never again seek collaboration with the people who have shown no interest in working with Democrats in good faith and who brought Donald Trump to power.

Doing so will require controversial structural reforms such as eliminating the filibuster and adding justices to the Supreme Court who would both make the American political system more democratic and weaken the GOP before it has the opportunity to send the next Trump to the White House.

Beyond elections, the advances we’ve seen in recent years on issues from climate change to criminal justice reform, and labor actions like the Fight for $15 walkouts and the recent teachers’ strikes, have offered definitive proof that protest still works. The phrase “earned media” might grate in the wake of what happened in South Carolina, but it applies just as well to the attention Black Lives Matter, the Sunrise Movement, and other groups have been able to draw to their respective causes through demonstrations. With the goal of reaching more of those who aren’t young in mind, organizers should aim not only to agitate but to educate in rallies, town halls, and other events pitched to the nonconverted.

Sixteen years passed between Barry Goldwater’s landslide defeat in the 1964 presidential election and Ronald Reagan’s election in 1980. In that time, conservatives regrouped to build out organizations, erect institutions, and discover leaders that turned the modern right into a true, self-sustaining movement. Meaningfully addressing the existential crises facing the country and the planet will require the American left to sprint down the path to power much more quickly.

That process could well be accelerated by the gathering coronavirus crisis, which has already re-illustrated, better than any Sanders speech could, many of the inequities that define the American way of life: a health care system that cannot meet the needs of vulnerable citizens; work that is contingent on the whims of capital.

But even if not, the left also has well over a century’s worth of organizing and activism to draw lessons and inspiration from. That legacy may well convince some to abandon the conventional political arena altogether in the hopes that a third-party effort might finally awaken the American working class. But as critical as outside pressure, labor organizing, and independent movements all are in their own ways, electoral politics still holds the greatest promise. American political parties have never been weaker or more vulnerable to ideological insurgencies, and the conservative movement, even when the establishment machines were stronger, was eventually rewarded for its discipline in seeking a takeover of the GOP rather than investing seriously in an effort to break from the major party system.

The likely defeat of Sanders’s campaign is a real setback, but no cause for retreat. The work will continue, because it must.

Osita Nwanevu is a staff writer at The New Republic.