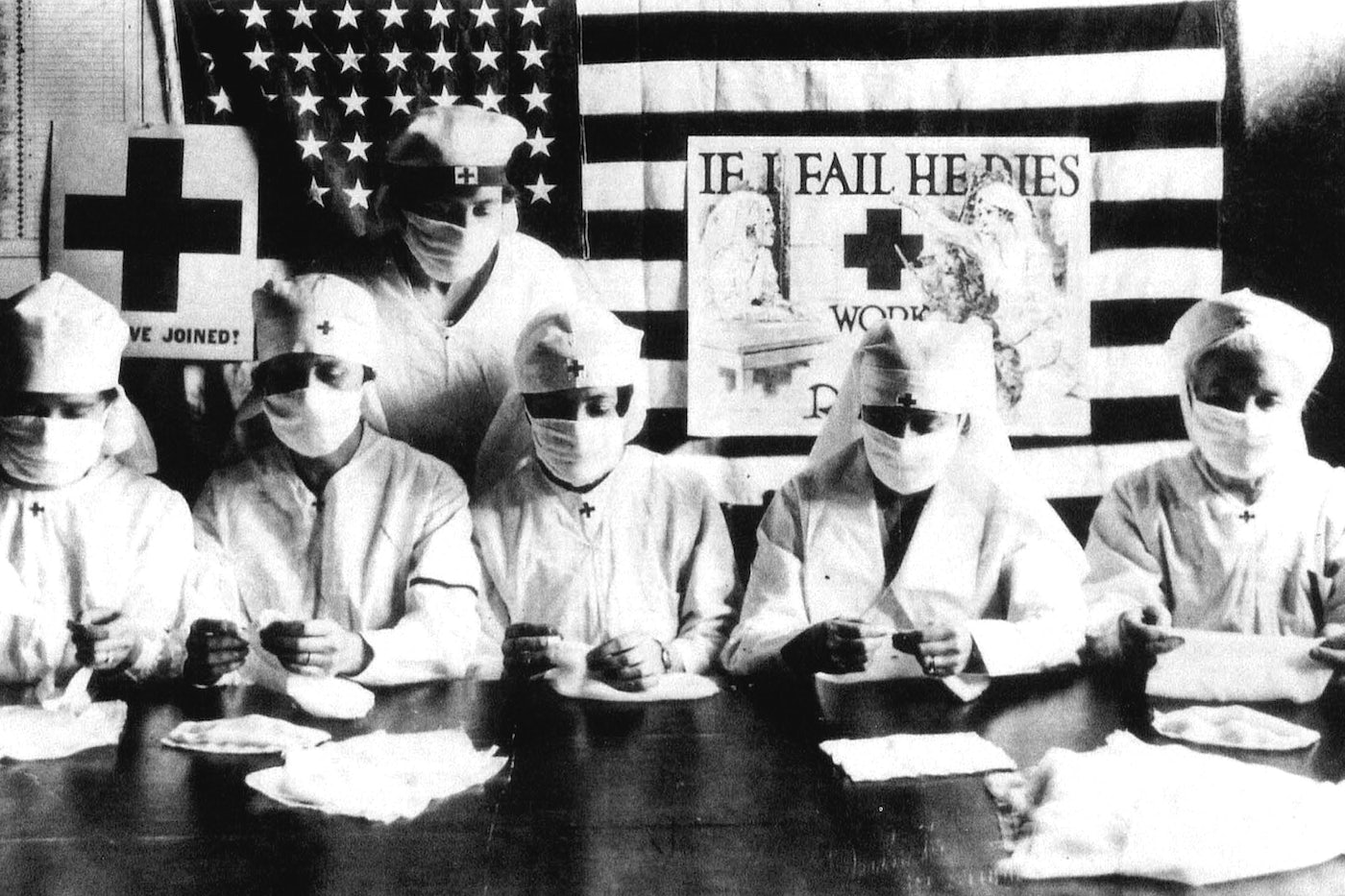 When Donald Trump first declared that the coronavirus shutdown would be over by Easter, he was embracing a hallowed American tradition of happy-talk denial. As the polymath president (part wartime leader, part Nobel-level epidemiologist) said last week, “Our people are full of vim and vigor and energy. They don’t want to be locked into a house or an apartment or some space. It’s not for our country, and we are not built that way.”

America was never built that way, as the history of the influenza pandemic a century ago demonstrates. In October 1918 alone, 195,000 Americans died from the virus. Yet President Woodrow Wilson, obsessed with a war in Europe that would end on November 11, made no public references to the disease. And states received no assistance from Washington, not even from the Food and Drug Administration.

Meanwhile, the big-city newspapers—the dominant news sources in the days before radio—sugarcoated the truth, practicing an alarming level of self-censorship. Any article or headline suggesting more than casual concern about the disease would be open to attack for undermining morale on the home front during the Great War.

“As terrifying as the disease was, the press made it more so,” John M. Barry wrote in his epic history, The Great Influenza. “They terrified by making so little of it, for what officials and the press said bore no relationship to what people saw and touched and smelled and endured. People could not trust what they read.”

The result was a crash course in how public ignorance coupled with rampant misinformation tragically delayed efforts to contain the virus. At least, unlike Trump, Wilson was neither promoting untested treatments in White House briefings nor suggesting that New York hospitals were selling face masks on the black market. But the papers from 1918 are also a reminder that clueless public officials, such as Florida Governor Ron DeSantis (who kept the beaches open during spring break), are only the latest in a long line of American leaders who allowed business values to trample public health in an emergency.

To give a flavor of how newspapers (anticipating Fox News) willfully downplayed the worst plague in our national history, here are highlights from newspapers in Boston, New York, and Philadelphia on a single day, Friday, October 4, 1918.

Influenza first roared out of control in the U.S. at a military base, Camp Devers, about 35 miles from Boston. By September 22, 20 percent of the 45,000 soldiers at the camp were on sick leave, overwhelming the military hospital. From there, Boston was next.

The war news from Europe (“Haig Breaks Through/Huns in Full Flight”) led the Boston papers on October 4. A Boston Evening Globe correspondent in France reported, “The British troops smashed a large and vital section of the Hindenberg line today.” The Boston Post, boasting a daily circulation of more than 500,000 copies, added that Austria, a major German ally, was ready to sue for peace.

Mournful stories on the front page of both the upmarket two-cent Globe and the penny Post revealed that New England was falling behind its quota in bond subscriptions for the fourth Liberty Loan—the 1918 equivalent of Trump’s obsession with the stock market. As the Post warned in an editorial over the banner and above the war news, “If we here fail to raise our quota until the final day it gives the impression that New England is behind the rest of the country. The place for New England is at the front whether it is buying bonds or responding to the nation’s call for men.”

As for influenza, that was merely the day’s third story, carefully downplayed to modest, one-column, front-page articles in both papers. At least the Post headline was honest in its assessment: “No Gain on the Epidemic in Boston.” And a sober subhead reported, “191 Deaths Yesterday—Situation Remains Grave.” There was, however, a bit of hopeful spin: “Health authorities are encouraged that the increase is but a small one.”

The Globe went further, claiming in a subhead, “Cases Show Decrease.” That upbeat conclusion required aggressive juggling of statistics; the author had compared the day’s deaths to the high point earlier in the week. But a chart that the Globe buried on page nine revealed the underlying truth: Deaths from influenza (now more than 2,000 in a city of 700,000) had increased virtually every day since mid-September.

Signs of denial were everywhere.

“We are getting very little encouragement to expect help from the outside,” McCall said. “The other states have many demands at home for their nurses and doctors.”

Nearly three weeks into the epidemic, city leaders were still debating whether to close the churches and, more ominously for the working class, the saloons. Meanwhile, according to the Globe, Massachusetts Governor Samuel McCall asked the government in Washington to lift its ban on Sunday driving (part of a fuel-rationing effort) because “it will take more people out into the open where fresh air and sunshine will enable them to better fight the grippe.”

Only by putting together the tiny headlines on page 11 of the Boston Post could a dutiful newspaper reader get a sense of the full extent of the epidemic: “Alarm in Providence,” “1500 in Pittsfield,” “12,000 in Brockton,” “All New Bedford Saloons Closed,” and “70 Per cent of Mill Hands Ill.”

The most chilling line (and one that has an echo today) was a bleak quote from the state’s governor, buried in the midst of a statement that otherwise peddled optimism. “We are getting very little encouragement to expect help from the outside,” McCall said. “The other states have many demands at home for their nurses and doctors.”

New York City had its first death from influenza in mid-September, and the toll would eventually reach 33,000, although sloppy record-keeping probably minimized the total. But in the October 4 New York Times, influenza barely qualified as news fit to print.

It was one thing to devote the entire Times front page to war reports from Europe and a warning about slackening Liberty Bond sales from Treasury Secretary William Gibbs McAddo. But it was another to obscure the reality that influenza was ravaging the East Coast.

Paging through the Times, here are some of the stories a reader would have encountered before getting to the first article on the flu: John Barrymore won raves for his performance in Tolstoy’s The Living Corpse. Miss Katharine Every Morgan was married at her family’s Long Island country estate in Wheatley Hills. And in financial news, “The cotton market yesterday was dull and, to the bulls, disappointing.”

Only after trudging through the classifieds, on the final page of the paper, would a reader have arrived at a one-column headline, “Grip Now Sweeping Forty-Three States” and the subhead, “Drastic Steps Taken Throughout the Nation to Check on the Epidemic.”

Normally, if a headline includes words like “Drastic” and “Epidemic,” editors don’t hide the story on page 24.

The New York Evening World, which back then was probably the best and liveliest paper in the U.S., made editorial choices similar to those of the stodgy Times. The main epidemic piece (“Alarm Felt Here Over 1,695 New Influenza Cases”) was buried on page 15. Running next to it was a huge drawing of a smiling baby who loved Kellogg’s Toasted Corn Flakes. The ad copy offered a sharp contrast to the dire health news: “It is a blessing that American children are so well-fed and cared for in these troublous times.”

Only in Philadelphia, then the nation’s third-largest city, did desperation prompt the newspapers to acknowledge, belatedly, the extent of the emergency. An incompetent Republican political machine had encouraged a monster two-mile-long parade on September 28 to launch the Liberty Bond drive.

A century later, Trump would almost make the same mistake: For several days in late March, he claimed he wanted the churches filled at Easter. According to Barry’s book on the 1918 epidemic, “Within seventy-two hours after the parade, every single bed in the city’s thirty-one hospitals was filled. And people began dying. Hospitals began refusing to accept patients—with nurses turning down $100 bribes—without a doctor’s or police order.”

Both the Philadelphia Inquirer (“Theatres, Saloons in Penna. Closed to Halt Influenza”) and the Evening Public Ledger (“Saloons Shut at 7 Tonight by Grip Order”) devoted the left sides of their front pages to the crisis.

The reporters and editors at the Ledger even went beyond chronicling the belated closings of public spaces. An article that ran inside the paper featured a headline that seems apt today: “Poverty Adds to Grip’s Woes” with the subhead, “Many Suffer From Lack of Goods and Supplies.” A Ledger editorial sounded the right notes as it pointed out (in, admittedly, stilted language), “Plagues of the past have thriven on dilatory treatment.” And it concluded, “If transient hardship must pay for this foresight the price is cheap.”

Of course, the parallels between 1918 and today are inexact. For one thing, President Woodrow Wilson was invisible rather than inflicting on the nation daily rants filled with misinformation, vitriol, and bizarre self-congratulation.

But the influenza pandemic also serves as a reminder of the importance of honest news coverage in the midst of a devastating crisis. An out-of-control virus is beyond the reach of spin and feel-good fictions. In short—as Trump and his Fox News fan club need to learn overnight—it isn’t “Fake News” if it is happening to you and those whom you love.