Police Blinded Me in One Eye. I Can Still See Why My Country’s on Fire.

“All anyone wants to talk about is freedom of the press, if I am angry, what I will do next. I am angry—but no more than I was this time last week.” 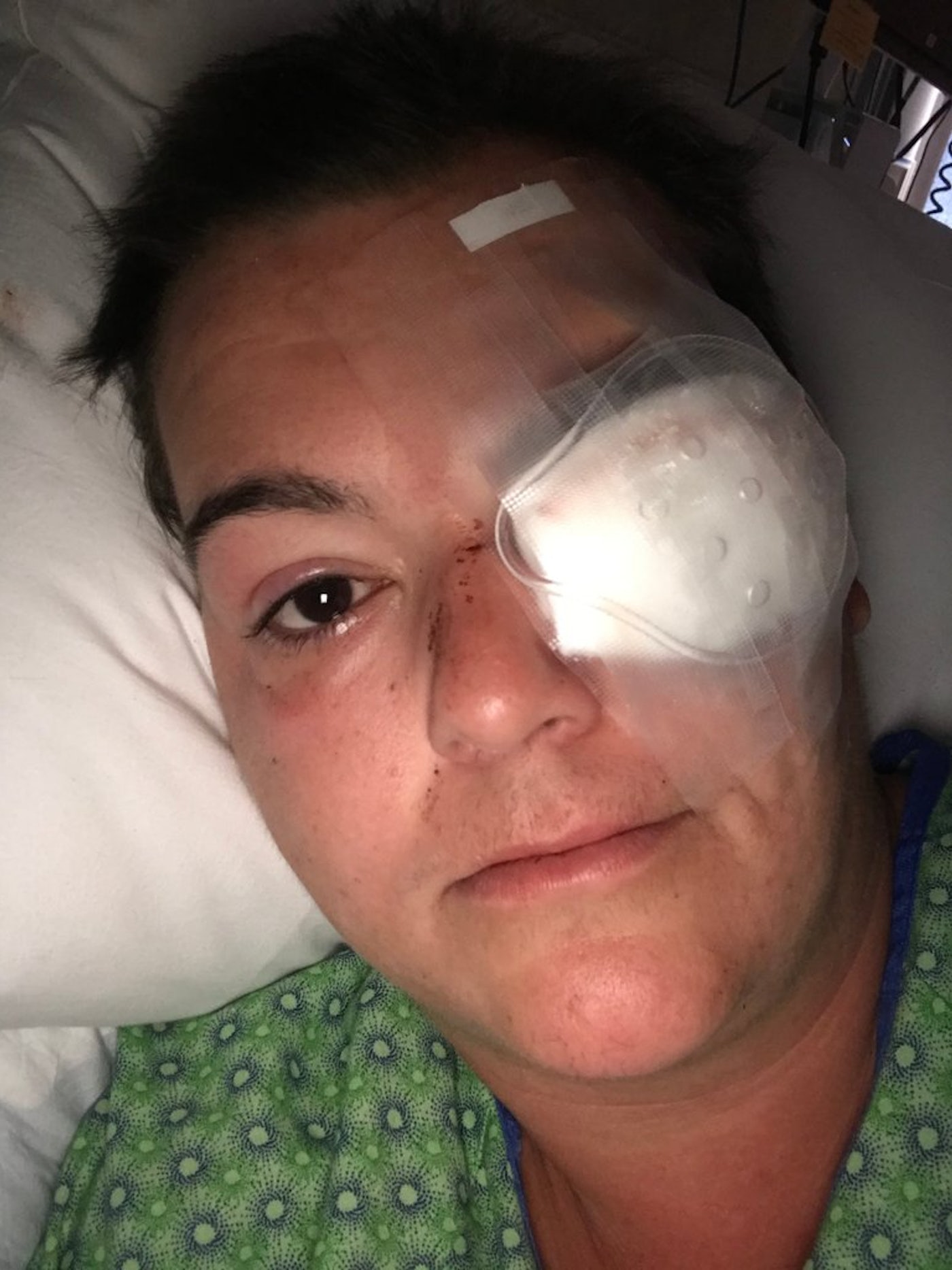 I have been weeping since Friday night, because that is the night I was shot in the face. I have, since then, begun to piece together what happened to me: It wasn’t a rubber bullet, it was a foam bullet. I was standing near Minneapolis’s Third Police Precinct. I will not regain sight in my left eye. I will need more surgeries. But I have not been crying for my lost vision; rather, it feels as though my body is reacting to what is happening to my country.

This has been coming for years; anyone with wisdom has felt it in their bones. You cannot elevate to leadership the most base elements of humanity, the most amoral and reckless and cruel, and think that things will go well for the nation. Back in 2016, a week or so before the presidential election, I wrote a piece about how Donald Trump’s campaign speeches were openly fascist, how they spiked fear in those parts of my soul that remember being raised as a nativist. Back then, you couldn’t say Trumpism was a form of fascism—it was considered a bit hysterical.

That remained true in mainstream consensus throughout 2017 and 2018. Sometime last year, more people started to realize that the norms were shattering, and they weren’t reassembling by way of any magnetic properties of self-healing constitutionalism. It was after we put migrant kids in camps and after the president started encouraging people to batter the press and after impeachment, but before the current stage of authoritarian collapse, which has us gassing clergy and desecrating churches for photo ops. Fascism is always a slow slide into routinized mayhem, noticeable to most people only in retrospect.

Since I was shot, I have been worldwide front-page news: China is using my bloodied face as propaganda, for instance. Hundreds, if not thousands, of interview requests have flooded in. All anyone wants to talk about is freedom of the press, if I am angry, what I will do next. I think that I am angry—but no more than I was this time last week, when I was watching America burn for the pleasure of our vainglorious leader. I lost an eye; George Floyd lost his life. What right do I have to rage on my own behalf?

I lost an eye; George Floyd lost his life. What right do I have to rage on my own behalf?

I rage instead on behalf of my country, for the hundreds of millions of people who were appalled when Trump administration officials tried to change the words of Emma Lazarus into a brief for white resentment. I rage for the irony of the line “yearning to breathe free,” because we would not have our cities ablaze had our leadership cared an instant for the freedom or breath of those it considers its opposition, which is to say the citizenry.

If we must talk about press freedom, we must also talk about the First Amendment’s absolute guarantee of freedom of peaceable assembly—and the fact that it is the police, not some mythic rogue formation of antifa saboteurs, who are escalating conflicts. We know this because journalists keep documenting it, and because any person in a demonstration can become a momentary journalist if they have a cell phone and a data connection. We have seen the violent thugs in their stormtrooper uniforms joyfully unleashing violence, spitting on citizens during a pandemic, running civilians over with their SUVs, saying fuck your rights—and worse, fuck your life.

I have lost half of my vision, but I lack no clarity: There can be no peace without justice, and no justice without full-throated, damningly righteous anger. I am asked over and over again why are people burning and looting, and I wonder what anyone thinks they would do if they spent their whole lives being told they were lesser than and not equal, and then one day they woke up to a police state.

We saw this six years ago in Ferguson, Missouri, where I was embedded for weeks in the protest zone, sleeping in a tent with a group of youths who called themselves Lost Voices. It’s important to remember that the designated protest zone was about five blocks of a street called Florissant—and that people lived in cul-de-sacs off that street. That meant they had to drive through the tear gas and chaos to take their children home safely. Once police gassed the children, mothers broke down the glass door of the McDonald’s trying to get milk for their babies’ eyes. Employees were throwing milk to them, rushing to the back cooler to get more because tear gas is self-evidently bad for children. None of this got mentioned in the next day’s reporting from the mainstream press, which simply recited that the McDonald’s was looted.

A few days after that, I was taking photos on the highway where protesters were blocking traffic. Media were behind concrete barriers, clearly working as press rather than participants. An officer dressed all in black with plastic shin guards and elbow pads, dangling zip ties from his belt, pepper-sprayed me point-blank in the face. I have a picture of him somewhere, three feet away from me, shot when my camera was staring down the muzzle of his chemical weapon, and the hatred and glee twisting his face still gives me nightmares.

I am thinking about him a lot in recent days, as I watch footage of TV crews being arrested on live air and police spraying what they call “less lethal” rounds into crowds indiscriminately. I am thinking about him as I scroll Twitter, where brave men hide behind burner accounts to tell me “play stupid games win stupid prizes”—alt-right shorthand for calling me a traitor, to either the country or my race. In their discursive world, good white ladies are not supposed to scream that Black lives matter or point out the bigotry inherent in a system of law enforcement that started with slave patrols. White women, to those kinds of men, are not supposed to do much of anything except be quiescent until it is time to have babies or furnish a sexual pretext for some good old-fashioned racism. We are certainly not supposed to refuse to learn our lesson, even after we have been punished by having an eye put out.

Perhaps my best and worst quality is my defiance: I am by nature a frontline sort of person. That is how, over the last half-decade, I have come to document a series of events that would be war crimes if this conflict were international rather than internal. Those things are done with impunity in America, and none of it is new. What is new is that this lawlessness has trickled up into the White House—and now people who have until recently been able to blithely ignore it all are being harmed. The oligarchs and masters of the economy are being hurt by our feckless foreign policy and economic unrest, and the average suburbanite is watching the country burn to the ground while the president tweets encouragement not for the traumatized nation but for the fires.

He promised to end the “American carnage,” and some people believed him. That carnage was galvanized to serve his whim the moment when he announced that he was invoking the 1807 Insurrection Act to militarize the police response to the protests. Without missing a beat, Trump adjourned from that announcement to stage a sickly exploitative Bible-brandishing photo op in front of a Washington, D.C., church damaged in the protests. To clear his path, Metro D.C. cops dispersed the demonstrators in nearby Lafayette Square with clubs and fresh gas attacks. What I learned long before this last week is that you don’t need both your eyes to see that the real American carnage is just beginning.

Linda Tirado is writer, photographer, and author of Hand To Mouth: Living in Bootstrap America.