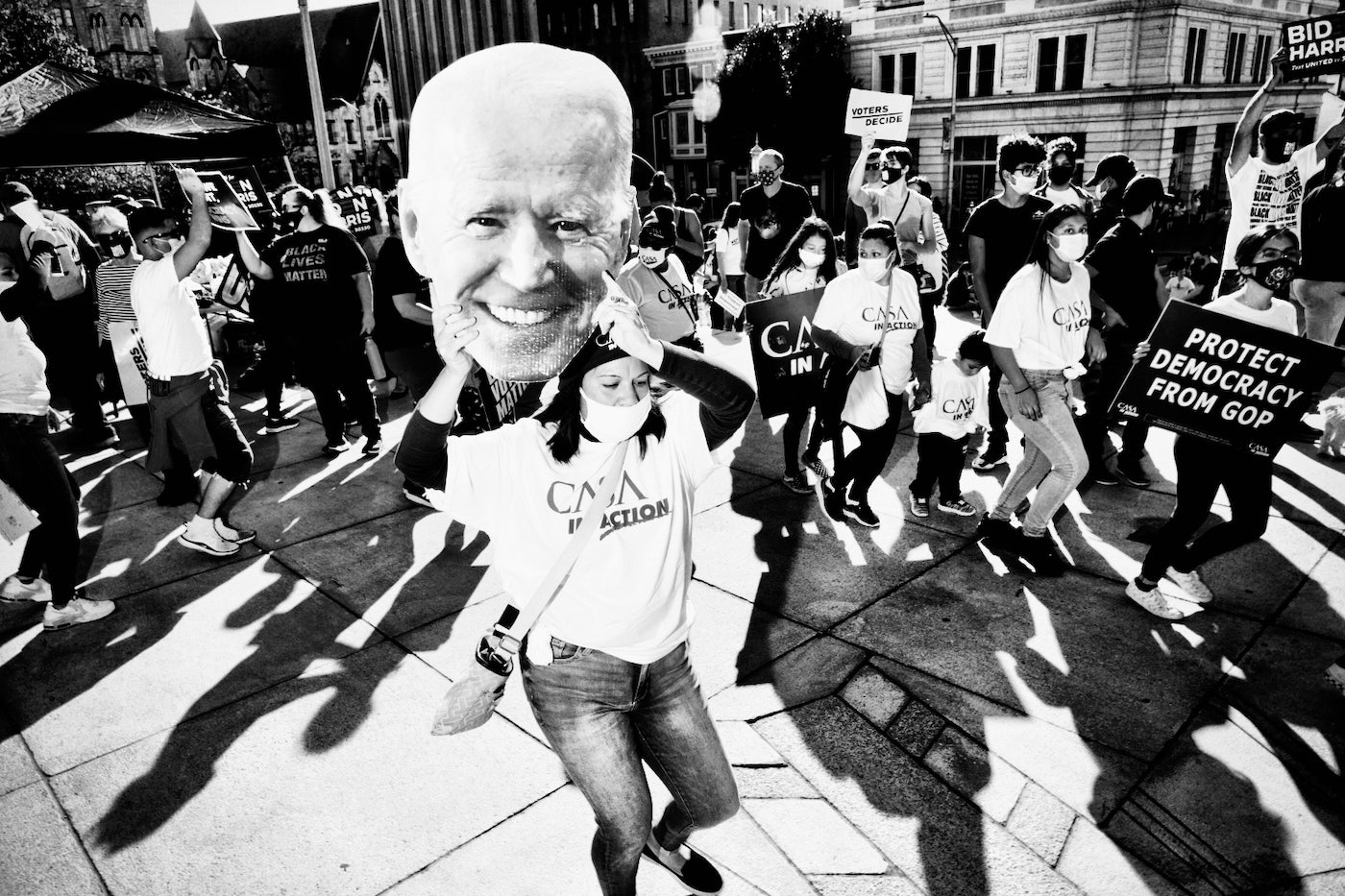 Most of America spent this week at home watching the events of this drawn-out election play out on their screens. But the anxiety, the anger, the joy, and the relief of this week didn’t take place solely behind closed doors.

Out on the streets, voters and ballot-counters and protesters of all stripes turned out to fight, fret, and—for supporters of President-elect Joe Biden—ultimately celebrate.

Photojournalist Mark Peterson traveled to Pennsylvania, Washington, D.C., and New York City to watch votes get counted, pro-democracy protesters rally in support of election officials, and Trump supporters cling to flagging hopes that this is not how his presidency ends. He saw impatient voters, angry Trump supporters, exultant Biden fans, and a change in the national mood as the Trump administration began its dénouement.

Shortly after Pennsylvania was called for the Democratic ticket, pushing Biden over the 270 Electoral College–vote line needed to claim the win, the president-elect issued a statement calling for unity and healing. “With the campaign over, it’s time to put the anger and the harsh rhetoric behind us and come together as a nation,” he said. “There’s nothing we can’t do if we do it together.” Biden’s sentiments have a meaning beyond the moment. He will likely take office with the U.S. Senate still in the hands of Republicans—though a pair of runoff elections in Georgia, scheduled for January, provide some remote hope that the Senate may yet be claimed by the Democrats.

Even as President-elect Joe Biden and Vice President–elect Kamala Harris basked in their victory, it remained unclear whether a concession of the race from President Donald Trump would be forthcoming. Among his array of tweets on Saturday, many of which were flagged by Twitter for misinformation, came an insistent all-caps blurt, “I WON THIS ELECTION, BY A LOT.” Whatever quixotic schemes he and his allies cook up in the days to come, this doesn’t seem to be the case.

One of the larger rallies during the last days of Trump’s campaign took place on Halloween in Reading, Pennsylvania. The crowds of supporters were active and responsive, voices booming as the president worked his call-and-response routine. But the crowds were carrying most of the energy. “It was his second rally of the day,” Peterson said, “He already seemed worn out, with a few rallies to go.”

On Election Day in Luzerne County, Pennsylvania lines were already forming; social distancing requirements had them stretching a considerable length before the polling place opened. Here there were more Trump supporters in line; the in-person vote allowed the president to stake a large lead that eventually withered away.

At the Wilkes-Barre polling place that Peterson visited on Election Day, poll workers were initially frustrated by technical issues, causing a 20-minute delay in opening the polls to the crowd outside as poll workers tried to reboot the system. “People outside were getting pretty grumbly about the wait,” Peterson says, “and many seemed genuinely surprised by the long line.”

“I went to eight different polling places in Wilkes-Barre that morning and everywhere I went there was at least one person wearing these badges,” Peterson says. Meanwhile, fears of Trump supporters causing havoc at polling places proved to be unfounded. “I went looking for signs of voter intimidation and didn’t see anything, no militia types, no Republicans from the DOJ,” he says.

At the Philadelphia Convention Center, new poll workers got sworn in to aid in the effort to count votes after Election Day. These reinforcements arrived to help count the mail-in and provisional ballots that cut into, and eventually overcame, Trump’s lead from election night.

At the Republican National Committee headquarters in Washington, D.C., a hastily called rally that Republicans hoped might draw the media’s coverage ended in a bust. “It was rather poorly attended,” Peterson noted, but one attendee stole the show. “This older woman wearing a bike helmet basically showed up and really took it to the Republican demonstrators, giving them a long lecture about how every vote counts.”

The security fence erected around Lafayette Park in Washington, D.C., was turned into an art installation, where anti-Trump artwork and placards ring the scene.

At a Count the Vote rally in McPherson Square on the day after the election, a tense scene was momentarily broken by a cry of celebration as those in the crowd learned that Biden won Michigan, and people started celebrating. The joyful reaction lasted only a brief moment before those assembled went back to what they were doing: nervously waiting for more results. “Everyone was on edge,” says Peterson.

Washington, D.C.’s Black Lives Matter Plaza has been the venue of several confrontations between protesters and police over the past few months.

Trump dispatched Pam Bondi and Corey Lewandowski to Philadelphia to inveigh against election officials’ efforts to count votes, but it did not go well for them. “They were being pretty much drowned out by a dance party across the street,” Peterson says. “The pro-democracy protesters had a D.J. … they were just blasting it. Corey is kind of a … prickly guy. You could tell he was not happy.”

Peterson caught a mother and daughter in an emotional moment as the crowds that had gathered in McPherson Square Park in Washington, D.C., watched Biden give a speech on a big screen. “It was just incredible, the young girl, how concentrated she was,” Peterson says. “It seemed like she was trying to comfort her mom in that moment.”

Outside the convention center in Philadelphia where officials worked to count the remaining votes, Trump supporters kept up a steady stream of antagonism. “There were about 50 of them,” Peterson says, facing down crowds of Biden supporters that at times grew to 300 people.

For the pro-Biden crowd, Peterson says, “the jubilation and excitement was palpable.… This was the moment when they started to understand it was just a matter of time.”

Trump supporters vainly kept up their shouting. “I think they knew Trump was going to lose,” Peterson says. “It wasn’t like they were sad, more like they were in shock.”

As the end of the day drew nigh in Philadelphia on Friday night, the two groups of protesters were kept separated, the Trump supporters glowering as the other side danced. “I shot this picture early in the day,” Peterson says. “It was around 11 in the morning, but they just didn’t stop. Every once in a while, someone would give a speech, and the crowd would settle. But after the speeches were over, the D.J. would play, and they would just dance. They were still dancing at 7 p.m., when I finally left.”

Biden’s victory elicited honking and hullabaloo in New York City as people around the world celebrated the Biden-Harris historic win.

Jason Linkins is a deputy editor at The New Republic.

Mark Peterson is an award-winning American photographer represented by Redux Pictures in New York. His latest monograph is Political Theatre, a look at the 2016 U.S. presidential election.