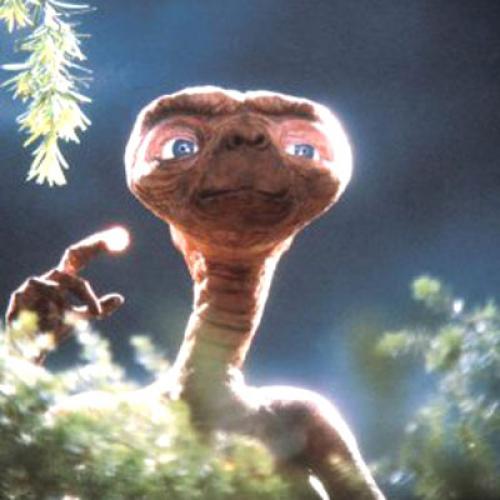 Fervently, skillfully, seductively, Steven Spielberg evangelizes on. Close Encounters of the Third Kind (TNR, December 10, 1977) seemed to me “not so much a film as an event in the history of faith,” and that faith, I thought, was less in beings Out There than in the film medium’s ability to convince. Technology, at the behest of the culture that created it, had been called on to satisfy the culture’s deeper needs, to soothe its fears. If you discount the revised version of Close Encounters, which I hope has been withdrawn, then Spielberg’s next work in this line is E.T., The Extra Terrestrial, which too manifests the thaumaturgy of film, but on quite difference scale and with quite different colors

In a sense, E.T. begins where Close Encounters ends: we’re not awaiting Their arrival, They are here. A space ship from Somewhere has landed in California at night, and one of the extraterrestrials has left the ship to explore. Suddenly men burst into the forest, searching for the ship. (Through most of the picture these men are photographed from the chest down; the emphasis on their heavy belts with keys and guns. Or they are photographed from the back. They are made impersonal forces.) The spaceship takes off hurriedly, leaving the adventurous E.T. stranded. He – we are told later that creatures is “boy” – is vaguely human in appearance, with eyes and arms and elongated hands and fingers, with very short legs, an enormous head, and an extensible neck. His skin is a sort of greenish hide. His chest glows when he is frightened; his fingertips glow when he is exercising his special powers. From the start he is shown to be very far from a threat or a monster: he is vulnerable, unagressive, and frightened.

The E.T. is discovered by a boy of about ten who lives in a town nearby, a boy of the same height as the creature. He befriends the E.T. and hides him in the closet of his room in the comfy new house where he lives with his older brother and younger sister and their mother. (The father of the family has decamped with another woman.) All three children keep the secret as long as possible from mother, as if they had taken in a stray animal whose presence she might dislike. The children know very well that this creature is an E.T. They are fascinated and friendly; the E.T. responds with at least equal affection, and he demonstrates the quickness of his mind by picking up words of their language.

All the while that this warmth grows between him and the family – eventually the mother discovers him, too – the U.S. government is tracking him down with electronic devices. The E.T., is fond though he is of his new friends, is homesick; the ten-year old scrapes together materials for him, including a computer game that’s in the house, and the keen-minded E.T. fashions a device to send signals to his compatriots Out There. The climax of the picture is a contest between officialdom’s fight to capture the E.T., in the course of which they nearly kill him, and the family’s fight to let him return. Which, after a chase whose banality is leaved with neat fantasy, he does.

One old plague plagued me again. This California family is hip to everything in pop culture, so I couldn’t help wondering why they hadn’t seen Close Encounters, why they never referred to it in their dealings with the E.T. The modern characters in film, no matter how detailed their lives are in other minutiae, are usually shorn of the film knowledge they would otherwise have, if that knowledge would give them a consciousness damaging to the film they are in.

A basic difference between Close Encounters and E.T. is that the former is epic – certainly in its forty-minute conclusion as well as in its global events – and the new one is domestic, enclosed in one town, almost in one home. The tone of the first film is heroic, of the new one, intimate and cozy. But we can now see some constants, so far, in the Spielberg space credo.

1) Children are out best communicators with Them. Children are open, unafraid, and curious. The very small boy in Close Encounters goes willingly with the visitors. The somewhat older boy here, who is really the protagonists, has the same openness, with some added intelligence and some sense of the dignity of any living being.

2) The boy’s mother is alone. For what ever reason, her husband doesn’t live in the house. This removes a too authoritative male presence from the design and keeps the household sex-free. The mother in E.T. certainly misses her husband and the children refer to him feelingly, but his presence would add a jarring note of dominance. And the relations with Them in Spielberg films have no sexual suggestion on either side. Sex, of any kind, is no part of the promise Out There.

3) The extraterrestrials make their contacts in the U.S. They may cause ruction elsewhere, as in Close Encounters, but when they communicate, its in Wyoming or California, not Swaziland or Burma. Certainly not the U.S.S.R.

4) The American stratum with which they are juxtaposed is gadgety middleclass – TV, computer games, kitchen appliances, kids’ closets overflowing with toys, refrigerators jammed with supermarket stuff. The extraterrestrials don’t some in contact with sharecroppers’ cabins or millionaires’ mansions or the Institute for Advanced Study. Achievement in intergalactic exploration is contrasted with achievement in household doodads.

5) Adults are profession-hardened – allowing for exceptions like Truffaut in the first film and one doctor here – to the point of obtuseness and inhumanity. This is the mark Twain-Salinger syndrome carried into sci-fi.

6) Hope for communication between our planet and other places – thus, by extension, hope for continuance and mature of the human race – lies more in feeling (the openness of the child - than in intellect (the grim efficiencies of the adult). The visitors from Out There are assumed to have higher intelligence, if only because they got here and we didn’t get There; but we are happy to be their inferiors. IN a way it’s a relief to relegate adulthood to them, to keep ourselves children, free for fuller feeling.

7) All of this is made apprehensible, credible, by film. None of it would be so powerfully presentable without film. Finally, that fact seems more important than what is presented. Film does not facilitate the god from the machine: it’s the machine as god.

I once read a story – by Ben Hecht, I think – in which Jesus looks down on Hollywood from on high and see that a film is being made about him. For whatever reason, Jesus secretly takes the place of the actor portraying him and brings of the miracles without the help of special-effects men. The only way that Spielberg’s religious films (as I’d call them) could move from centering on worship of film to centering on the film’s subject would be if the equivalent happened here – if, for instance, an actual E.T. had substituted fro the ingenious puppet that represents him. But if that had happened, we’d probably have had word of it by now. So the weight remains with Spielberg’s faith in film – and the film’s reciprocity.

And an appealing film this new one is, with some charm, some glee in the childrens’ triumphs, some share in their friendship with E.T. There are few of the great surges of Close Encounters, but with the cleverness of the E.T. creation designed by Carlo Rambaldi (who did the creatures in Close Encounters), the swooping music of John Williams (who did the Close Encounters score), and the serviceable dialogue of Melissa Mathison, Spielberg makes the picture hold and grow. And, of course, with the authentic feeling he gets from the three younger, Henry Thomas, the ten year-old, Robert Macnaughton, his older brother, and Drew Barrymore (sweet granddaughter of the illustrious John), their little sister.

At the last parting between the ten year-old and the E.T., with the spaceship waiting, they are both in tears. The E.T. puts his finger next to the boy’s temple – the fingertip glows – and says, “I’ll be right here.” Then he boards the ship, which blasts off and streaks across the sky, leaving – even though it is night – a rainbow.

Well, maybe, some day, over that rainbow….