You are using an outdated browser.
Please upgrade your browser
and improve your visit to our site.
Skip Navigation
Stanley Kauffmann on the British comedy. 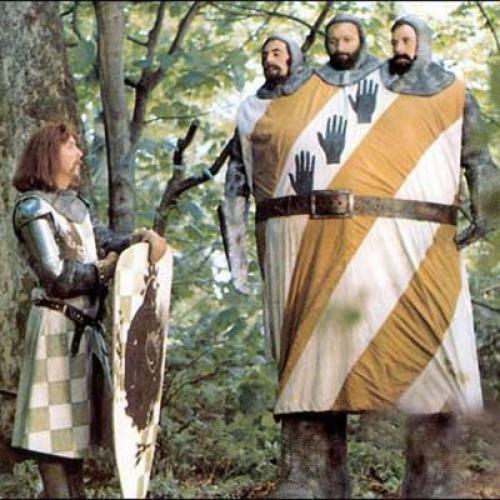 If news from Britain these days is only moderately good, it's exceptional, and welcome. The British economic gloom is made even gloomier by the fact that Ken Russell, of Tommy, sometimes seems to be the only filmmaker on the island able to get backing. Untrue. Here is Monty Python and the Holy Grail, which is neither as sparkling as it is said to be nor as bad as it seems to be at the start. But it's pretty good—thus, as British phenomena go these days, exceptional.

If you are watching Monty Python's Flying Circus, the BBC series now being run on PBS, you have more than some idea of the kind of film this is, except that the film has fewer sags and is better photographed. The previous Python film, And Now for Something Completely Different (TNR, Sept. 22, '72) had the hijinks ebullience of university humor, than which jinks there is none higher, and was a series of skits that hit or missed. Holy Grail is a series of skits on one general theme, so is disguised as an organic story. It too has hits and misses. When it hits, it makes some clear statements of national humor.

Whatever their flops in other comic veins (film slapstick, for instance), the British have always excelled at the tease. The BBC Radio's Coon Show, the Ealing comedies of the Kind Hearts and Coronets stripe, and now the Monty Python series, all depend on teasing around at a certain level of sophistication. Leg-pull is the British term, and the pleasant glow of the leg-pull, rather than the yok or boff, is the aim of Holy Grail. What's up for teasing here is the whole body of Arthurian legend, and the basic leg-pull is of the sanctity of that legend and of British sanctimoniousness toward it. Part of the leg-pull is through period realism. (Arthur identifies himself to two bedraggled caitiffs, and after he passes, one grimy serf says to the other, "He must be a king. He hasn't got shit all over him.") Part of it is just the reverse: anachronism. (A peasant launches a political tirade at Arthur in modern lingo.) Part of it is by digression into non sequitur. (Arthur hails a sentry at a castle, and in 10 seconds the formal military exchange has gone off into a long irrelevant discussion.) Part depends on obvious lunacy. (All the knights "ride" by hopping around as children do on their own two feet, while attendants behind them clomp coconut shells to sound like horses' hoofs.) Part depends on contemporary recognitions, (Arthur's upper-class accent is markedly different from that of almost everyone he meets, and seems to underscore his incomprehension of everything around him.) And more.

I, with inverted snobbism, tend to resist the snobbism of this kind of comedy, the sort of film that heavily implies, "You and I are cultivated, just a wee bit jaded, and will get these superior joke." (In another culture it's the Marcel Marceau syndrome.) And Holy Grail gets off to a particularly lame start in this vein by using fake Swedish subtitles under the credits, a gag that was not fresh when it was used, in reverse, in The Dove several years ago. But soon the picture reaches the good leg-pull level, mostly sustained, and just moves along in a comic temperament without much actual laughter. I laughed aloud only once. Some wretch is hanging by his wrists from a castle wall in chains. A group of knights below do an anachronistic song and dance. When they finish, the chained wretch manages, above his head, to applaud wanly.

The film was co-directed by Terry Gilliam and Terry Jones, who collaborated with several others on the script, and all of them, with still others, are in it. The photography by Terry Bedford is somewhat too pretty; it neither suits the horseplay, nor is it so sharply contrasted as to make an anti-romantic comic point.

Long before its vogue in painting, minimal art, or at least the minimalizing instinct, had grown strong in literature and drama. Mostly, I would guess, it was enfeebled imitating of Chekhov, in the belief that if he could do without conventional plot, then the way to be "modern" was simply to have no plot. The difference between this school and naturalism is mostly one of intent. Both schools try to eliminate dramaturgic interference with the veristic flow of events, but the naturalist usually has a sociological/political purpose while the minimalist has esthetic/characterological goals. Inevitably there have been some (let's call them) minimalist filmmakers. The Czech film Intimate Lighting is still the best I know, Sunday Bloody Sunday had more minimalism that I think it intended, and the French film Don't Cry with Your Mouth Full (TNR, May 10) comes modestly close to the ideal.

Now the French-Swiss weigh in with The Invitation by Claude Goretta, a fairly extreme example of the plotless film, which depends entirely on our interest in the lives that flow before us—the implications and resonances in them, rather than any developed narrative involving them. Goretta is a colleague of the greatly gifted Alain Tanner, has worked with him in England, has codirected with him, and has worked for Swiss television. Goretta has made six previous films—one of them called Chekhov or the Mirror of Lost Lives! He uses some of Tanner's actors. Like Tanner he has taste, sympathy, intelligence, skill and admirable ambitions. And, like Tanner, he has script troubles.

Goretta wrote The Invitation with Michel Viala. As in Chekhov's plays, the protagonist is multiple—the staff of an office. One of the staff, a soft man in early middle-age, lives with his mother; when she dies, he sells their house, moves to a considerable estate outside Ceneva, and invites his colleagues to a housewarming party on a Sunday. (He has not left his job; despite his new affluence he wants to keep working.) His boss and seven coworkers spend a summer afternoon with him, ministered to by a suave, incredibly decadent looking manservant, played by François Simon, son of the famous Michel Simon.

The camera simply attends the party. In plot terms, nothing happens. There is a small outburst of anger at the end in which the host is accidentally knocked down and, distressed, asks his guests to leave. Otherwise: one man keeps telephoning his wife and reporting on what they have to eat and drink. A spinster gets the megrims, locks herself in a bathroom for a time, then suddenly reappears when they're about to break in. The office clown cuts up. The boss and an older woman employee arrange a rendezvous. The young girl in the group gets tight and semi-strips. The archconservative of the group storms at the decadence. Slight scuffle; the party winds down. The film ends back at the office, everything as was except that the girl who stripped has been replaced.

Nothing is wrong with this film except that not enough is right with it. If a film is just going to look at some lives, then the lives have to be interesting either in depth or novelty or both. At least some covered reticulation, of social or political or any kind of relevance, ought to be uncovered. All that we get here is the unsurprising—true but not with any unforeseen truth. Of course the clown goes too far and the girl gets drunk and strips, of course the party builds to a bit of noise and then goes into late-afternoon quiet. But out of all this "of courseness" comes no special penetration and very little pathos. So, for all the accurate acting and discreetly disposed directing, the focus shifts regrettably to Goretta himself. Instead of admiring what he has done, we feel that we are asked to admire his unbanal good taste in doing so little.

Stanley Kauffmann is the film critic for The New Republic. This article ran in the May 24, 1975, issue of the magazine.