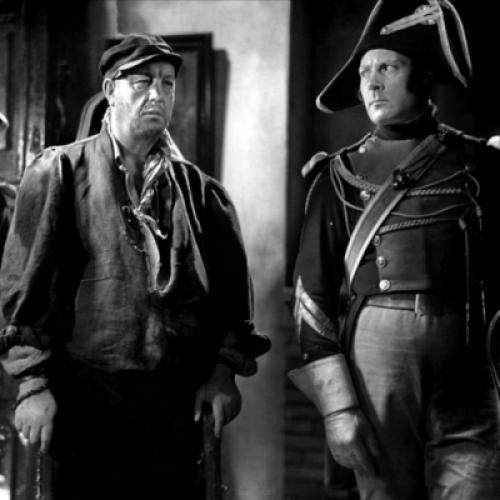 Those who are selling the French film Les Miserables to the American public are plugging the “challenge” angle; “France challenges comparison with the American version.” While this is a very good way to sell the picture to the kind of trade it will be sold to, there are still going to be some of us who will take a piece of that dare money as fast as anyone will put it up. Just to start with, the old picture made the course in one hour, forty-nine minutes: the present one covers roughly the same material m (counting intermission) two hours, fifty minutes. Mention of material, however, brings us down to more fundamental and less irritating matters.

The story in both pictures is one of escape from the cruel past into a new life—kindness, esteem and love—and then the past catching up again, eluded and catching up again. The theme is Injustice, and How may the poor of the earth escape it? When I stand off and imagine the outline of it, the story of Jean Valjean is a strong, honest and lovely account of human fortitude and cheer, worthy of awe as having touched the hearts of millions. But in the book itself these simple virtues get overlaid with plot details and the battle of Waterloo; and so while a picture might go beyond the clutter of material, it cannot be held against either of these that they do not. Both of them rely on the establishment of character—by actor or incident—and on whatever jostle of action and splendor of setting the book makes available. And so we have two different types of approach to what amounts to the same thing: a costume feature with a lot of chase.

Boleslavsky’s version had plenty of faults (John Beal, Rochelle Hudson, virtue poured in as a syrup, etc.), but while the subject had an inevitable ponderousness making the movement of the story as a whole rather thick and slow, it kept uppermost this element of conflict-through-pursuit, holding the story together and building its suspense. And the direction showed a degree of brute artistry in the arrangement of mob scenes, escape scenes, in the flow of sequences, the terrible approach of Javert through the sewers and the release pictured by his suicide.

In the new Miserables there are many fine things, and indeed it starts out as a more monumental work than the Hollywood film. I don’t know anything to compare with the first section of Valjean’s release from the galleys and incipient redemption from that way of life in his night spent with the Christian bishop, his next day on the road, with the theft of the silver piece leading to self-knowledge and horror. Harry Baur in the make-up here is a more tangible Valjean than any writer could create, comparing to any case-study as the actual case itself, with its warmth, dirt, and despair; and in such scenes as that of the gradual agony of a frozen conscience thawing out to strange tears he is certainly as high in the theatre as any ten gentlemen who will pitch you a proper tone for “Angels and ministers of Grace defend us!” But while the settings in this part as elsewhere are vital and appropriate, the production moves only as Baur moves; and by the time Fantine is introduced Baur has been hobbled sufficiently so that a certain characteristic of the direction becomes clear—in this country it would be called the ham touch. The trial scene, not successful in spite of care for details and the complex mass, comes somewhere about the middle and marks the beginning of a long long end.

The trouble with everything that comes after is that the producers seem to forget what has gone before, so that even the necessary simple motives of Valjean in his harbor of peace and loving service and of Javert stalking through the roadstead outside are lost in a rudderless course of playing a whole variety of situations for the most that can be got out of each. At Valjean’s meeting with Cosette, the story marks time through a lingering idyll of the unwanted step-child—her sisters, hard chores, dolls; then we vault entirely over their escape and new start on life together to a few hasty lines establishing Cosette’s sixteenth birthday. Her lover is introduced and in another twinkling his need for marriage money has been made the excuse for a comedy sequence between the Old Royalist and the Young Republican. On from there to the long and elaborate spectacle of the students’ revolt—the plotting, government precautions and spies, the parade, riots, barricades, attacks, repulses, speeches, miles of everything. Javert (of all people) pops up.

Along toward the end of this opera-bouffe rebellion—one barricade in the whole city, on which they sing defiance, die, recite defiance, die, strike attitudes, pose in groups with hair no wilder than the enemy’s aim—Valjean comes in again, waiting around for the endless heroics to run their course so that he can come back into the story and carry the young man we have known (adding up glimpses) about four minutes to the young lady we have known no more than two. Although our old friends Valjean and Javert now work out their linked destinies before we forget who was chasing whom, it is already too late to see any dramatic point. The producers have rejected the simple “chase” idea, rejected the more slow and solid way of biography; but if they had any substitute in a many-sided study of a class, a period, a universal truth, they have squandered that too on a county-fair jumble of sideshows and displays—none of them good enough to stand alone (the lower type of conventional Hollywood really), none of them tying together.

The photography may be art but is little else. Lighting and focus are so bad that there are whole periods when the main person of Harry Baur is an empty blur; and then to boot there will be a thousand feet of film at a time where there isn’t one honest straight shot—angles of five degrees, ten degrees, fifteen degrees, right and left and up and down. Some things were created with effect, particularly the rides at night; but good sets put up to be photographed are not photography and eyestrain is eyestrain, and while they no doubt had to struggle with faulty equipment, I don’t remember ever seeing anything so sustained that is such a miserable performance with cameras.

The Hollywood picture didn’t have Harry Baur (which was a loss) but it used what it had. Charles Laughton in the part of Javert gave it as much character merely because the character as written was eminent, giving a balance to the whole story. Compared with the French picture it was no more deep and no more shallow; but it was a moving picture, it could be seen and had directness and expedition; it progressed with finality from a beginning to an end.