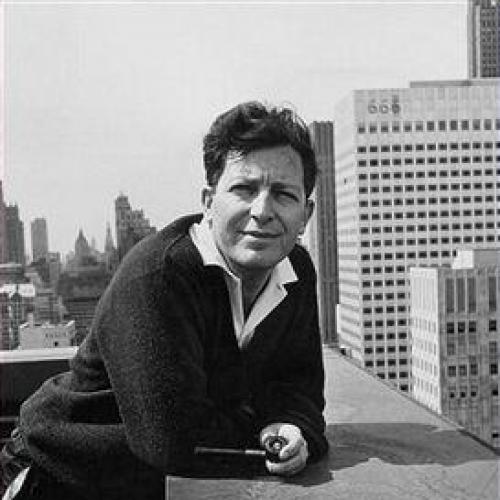 In an average stretch of TV time, only the ads make a strong aesthetic appeal, sensual and passionate. She caresses her arms after using Thrill (liquid) detergent and touches her fingertips to the nap of a Turkish towel laundered in Tide, and hangs upthe wash, done with Ivory, on a softly blowy line. Warmly erotic, she presses her cheek close to his because she has used Ban that stops odor for 24 hours. In a surprisingly poetic action he blows on shiny chromium and sees his breath, but he doesn’t know how his breath smells until he uses a Mouth Wash whose name I don’t remember. Her face expresses the passionate suffering of a headache (she has controlled herself) until, like an addict, she takes an aspirin. (She’s in control again.) And with studied persuasiveness, a mobile brow, a knowing eye, and a little smile, he tells you about the Spin filter on Old Golds. The ads almost always exploit the formal possibilities of the TV medium: montage; combinations of photography, graphics, speech, noise, and music; variety and novelty of expression. They are tight in structure and concise in statement.

In the nature of the case, the ads must be aesthetically superior to the programs because only they want and are designed to have an effect on the watcher, to come home to him, to activate him. The programs—whether dramas, games, panel-discussions, or routine newscasts—are tactical operations to hold passive attention, while the ads are the strategic action on the audience and speech to the audience. The ads have real content, commodities, and an authentic contact with social reality—sales. From the ads something is supposed to happen; from the programs nothing.

There are also, let us keep in mind, the more prestigious and aesthetically duller institutional ads of giant corporations, where the program itself is selected to enhance the Image (this point was repeatedly insisted on by the companies in one of Mr. Minow’s hearings). One has the impression, in these cases, that it is not a matter of vulgar marketing but of using up a swollen budget for Advertising and Public Relations.

Of course the formula—commercial action as the real business of life for which sex, education, community, politics, etc. are just the setting—is generic in our society and applies to other mass arts. But in television, for historical and technical reasons, it poses peculiar difficulties and has peculiarly displeasing effects. There is a clash, except in the institutional ads, of the real content and the programs; and it is frustrating and rather disgusting that the merely attention-holding programs claim so much time and foreground.

In the economics of magazines like Esquire, Mademoiselle, The New Yorker, and so forth, we must distinguish, just as in TV, the “sustaining part,” the ads, from the “non-sustaining” part, the stories, articles, and cartoons. The readers do not support the magazines; circulation is kept up and expanded for the ads. These magazines exist, however, in a tradition of publishing, back to Sam Johnson and Fleet Street, in which the audience did directly support authors and booksellers without patronage; and in a literary tradition, back to antiquity, in which artists gave real rather than token entertainment and instruction to their audiences. Further, every such magazine is established to reach a segment of the public that likes its particular format and attitude and for which its staff has hopefully an affinity. The ads are selective, both in their products and their style, for this special public. In Mademoiselle, for instance, one can hardly distinguish the chief editorial content (the fashions) from the ads, and the residual content (the articles and stories) can be astoundingly anything at all—sometimes even good. In Esquire or The New Yorker, the attitude of the staff, the writing, and the ads more nicely merge. This gives the artists a relative freedom: if they meet the prejudices of the staff and are willing to be rewritten in the right format, they can breathe and prosper within the fairly wide limits of not flatly insulting the advertisers or seriously subverting the social system altogether. And the audiences can pick and choose among many magazines. Very important, finally, is the technical fact that, concentrating on an article or story from beginning to end (even though continued on page 78), a reader needs hardly notice the ads unless he is interested. From all this it follows that parts of these magazines can live together and the non-sustaining parts might sometimes touch some reality, though not so much reality as the ads.

Historically, radio and TV programs have drawn on no free tradition at all. What is their tradition? Hollywood movies, official newspapers, and regimented universities. Even vaudeville, the best part of the tradition, was moribund when radio began and dead when TV began. From the very beginning the programs were patronized; they never breathed a free market-place nor were a forum for unadministered authors. Fine authors accept censorship, pre-taping, and being pushed around by format on TV that they would indignantly reject from a publisher or editor. Further, the broadcasters have tried from the beginning to corral “mass” audiences, without specific group or individual needs, and the networks have hugely succeeded. (This is what betrays the fine authors, for they cannot resist the lure of a million watchers.) Broadcasting has followed the common-denominator line—bland cum sensational—of the general-public press, like Life or some of the tabloids. All this has put the non-sustaining programs in a weak position.

Finally, technically, on TV and radio the non-sustaining programs exist in the same continuous experience of broadcasting time as the real content, the ads, that are the economically sustaining part. The effect of this is peculiarly unfortunate. Sometimes the aesthetically interesting ads are interrupted by the bland programs; other times the programs, desperately trying to hold or lull the audience, are interrupted by the agitating ads. Since the seconds are sold, everything is hurried. If there happens to be an important communication that is programmed for its general interest, like a crisis in the UN, it is devastatingly interrupted by a beer-jingle, a soothing soap ad, with heaven knows what effect on the citizens. Where the program depends on its sensational appeal, e.g., a bloody Doctor show, there is a fierce clash with its luscious food ad. Where the program by exception presents something that has an intrinsic value, e.g., an interview with a genuine and interesting man, it is trivialized by the ads; the man is insulted. (The interviewer is sometimes apologetic, usually just rude.) And of course the sale of the time-stretch to the advertiser necessarily favors him: either the program is interrupted by the ads irrelevantly to its own structure, or it is irrelevantly structured to be interrupted by the ads.

I am told that there are studies—have not seen them—that demonstrate that the more authentically interesting a program is, the more stimulating beyond routine sensationalism, superficial excitement, or mere prestige, the less the memory of the commercial. This figures. However exciting the ads may be aesthetically, their contents are only ordinary familiar commodities that cannot compete for attention against novel reality unless one happens to be terribly hungry or needy. And certainly interrupting anything really interesting must lead to resentment, and blotting-out of the interrupter. If indeed there is a competition of this kind, between program interest and ad retention, the programs must become blander or even more superficially sensational. Only the most prestigious name-corporations, DuPont, Ford, US Steel, Standard Oil, etc., could dare to sponsor interesting programs without fear of vanishing from memory, resting secure in being the pillars of society that can allow even the interesting to occur—if it endangers the image.

What is the solution? In my opinion, the watchers ought to pay for free communication and demand what they need. Free broadcasters, including cooperatives of technicians and artists, ought to run the stations and control the ads as they see fit. The FCC ought to give TV back to us.

None of this is realistic. Given the temper of the Americans and the realities of our society, perhaps the most humane and popular realistic solution would be rather to drop the programs and expand the commercials into more leisurely and extensive information and entertainment to replace them. There is no doubt that, at present, most of the best talent, peculiarly anonymous, is devoted to producing the ads anyway; it would be reasonable to give it its head. The incursion of the ads into the programs is now not uncommon—e.g. Jack Paar, coyly—but this has the tendency to reduce the person in the program to the stature of a man who would say such words, a disastrous result when the person is supposed to have some authority, like Dr. Joyce Brothers. (Gene Shepherd, of course, tried to avoid the reduction by speaking the ad sardonically or sarcastically.) It is better to go the whole way toward commercial carnival. Certainly the most characteristic invention of TV, the Giveaway shows (“The Price Is Right” or the Quizzes), giving away commodities and climactically Money itself, have worked in this direction, with the most pleasant bridging of format and ads, the liveliest excitement of the participants, the most authentic content, namely goods and competitiveness, and immense audience popularity.

The attitude of Newton Minow is apparently just the opposite: to “contain” the ads, to diminish their time and muffle their decibels! and at the same time to “improve” the programs, but under the same network auspices and commercial patronage. In my opinion, such a policy must result in making the TV even more official, controlled, and phony than it is. The basic commercial reality, the need for the expanding mass-audience, remains. The basic political reality, to affirm the status quo, remains. The higher-level programming would be entirely factitious and pompous: Establishment art, news, and information. My guess is that with more pretentious programming the big corporations would be even more in evidence. This is no doubt exactly what Establishment people, like the Administration, think is dandy. I don’t.

The world of TV is a peculiarly pure product of our public policy of an expanding economy with artificial demand (plus annual increases in the arms budget), to maintain both high profits and adequate employment. It has the aesthetics and human values that fit that policy.