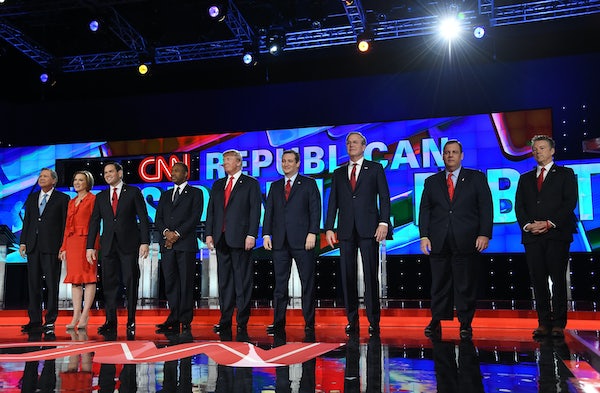 The Republican candidates are united on at least one front: You should be afraid.

Nearly all of the Republican candidates began their opening statements by discussing the specter of terrorism. After Rand Paul led things off by telling viewers that they should be wary of sacrificing American values in the fight against terrorism, Chris Christie set the tone, leading with “America has been betrayed,” before discussing the emotional effects today’s closure of Los Angeles schools—the result of a hoax—might have on children.

After that, things really got rolling. Carly Fiorina said, “Like all of you I’m angry ... it’s time to take our country back,” before subtweeting Donald Trump: “Bombast and insults won’t take it back.” Jeb Bush said, “Our freedom is under attack.” Marco Rubio spoke to the silent majority, saying “Millions of Americans feel left out,” before laying the blame on PC culture: They’re “called bigots because they hold onto traditional values.” Ted Cruz solemnly said, “America is under attack.” Ben Carson astonishingly called for a moment of silence!

Weirdly enough, only Donald Trump really stayed above the fray. His opening statement was about how great he was. But the tone for the debate has been set: This is going to be a debate about why some Americans are angry and why every American should be very, very afraid.