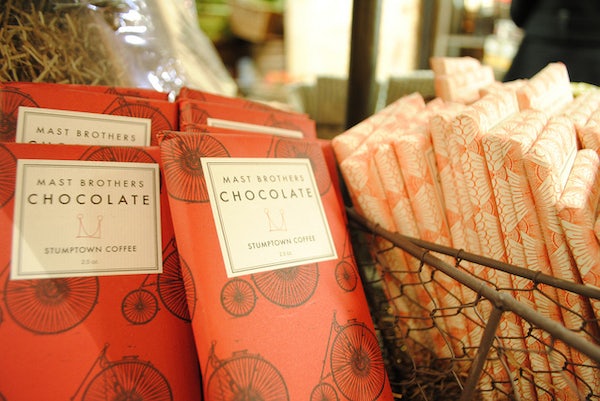 The Mast Brothers have been outed as truly mediocre chocolatiers.

A report from Quartz reveals what people in the chocolate industry have known for years: that Williamsburg-based Mast Brothers chocolate, which prides itself on its “bean-to bar” technique, is not just shockingly bad, but also has a history of being made with store-bought materials.

The best part about a chocolate bar is unwrapping it, and in this the Mast Brothers are geniuses: The thick, artisanal paper, printed by a single lonely cowboy living with three blind nuns, is well worth the $10 price tag. It’s what lies underneath that’s in question.

Good chocolate isn’t apparently supposed to taste very good. Industrial chocolate, like the Valrhona the Masts are accused of using in early bars, should taste “balanced” and “flavorless” with hints of “dark roast and vanilla.” For anyone who truly cares about what kind of chocolate they shove into their greedy mouths, “bean-to-bar chocolate has a distinctive taste that, like wine, ties it to its origin, and craft chocolate makers use minimal processing to retain that taste.”

The Mast Brothers continue to claim that they have used nothing but “bean-to-bar” since the beginning, but the origins of the beans since have been obscured by beautiful packaging.  “They have also stopped listing the source of the beans, omitting one of the most critical elements of a bean-to-bar chocolate label...because it looks better aesthetically to have less information on the label.”