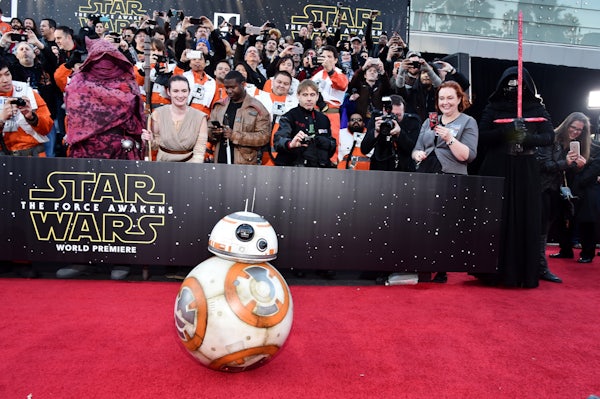 Neil deGrasse Tyson is being a real buzzkill about Star Wars.

After an opening weekend that made $517 million and draw widespread critical acclaim, it was about time somebody started throwing rocks at The Force Awakens. Following in the tradition of his Gravity and The Martian Twitter reviews, Tyson shared his thoughts on some scientific plot holes:

The entirety of the Star Wars canon is built upon bent and broken remains of the laws of physics (never forget the Endor Holocaust that would have been inevitable after the explosion of the Death Star). But Tyson’s criticism of beloved, certifiably adorable robot BB-8 seems harsh. Obviously BB-8 was designed with a variety of ground surfaces in mind. It’s probably made of a special, non-skidding metal unknown to our puny Earth minds. Its huggable, spherical body is probably buoyed by giggles and pluck.

In the real world, BB-8 was created by animatronics designers and operated by puppeteers. The scenes on desert planet Jakku were shot in the United Arab Emirates, and this featurette shows BB-8 chilling on some sand.