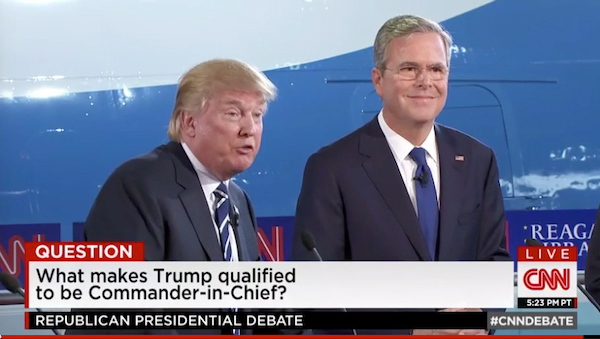 Jeb Bush has the perfect sense of humor for our time, and he doesn’t even know it.

“As his campaign has struggled to rejuvenate a languishing bid, some close to him have suggested the existence of a (very) secret weapon: It is at least possible that Jeb Bush is funny,” The New York Times reports. Jeb makes jokes, but Jeb does not get huge laughs. Jeb says that this is because people don’t get irony. He offered this excuse for his awkwardness: “Irony doesn’t work in the world of digitized campaigning.”

This is tragic. First, because irony is the security blanket of an aging generation. (Oh did you think my joke was racist? I was just being ironic.) And second, because Jeb doesn’t realize he’s perfectly suited for this cultural moment, in which the teens have reclaimed the failed dad joke and elevated it into an art.

Take this Vine, for example, which at the moment has more than 7 million loops, and in which a crowd of teens heartily applauds a bad and obvious pun.

The teens’ embrace of dad jokes probably has something to do with the agony of making jokes on social media. Sure, you miss every shot you don’t take, but on the internet, every shot you do take and still miss is hanging out there, forever, taunting you with its mediocrity.

Some of Jeb’s jokes that fit snugly into this: “I was in Washington, Iowa, about three months ago, talking about how bad Washington, D.C., is... It was — get the — kind of the. Anyway.” The best thing Jeb could do is embrace his joke failures and Vine himself.