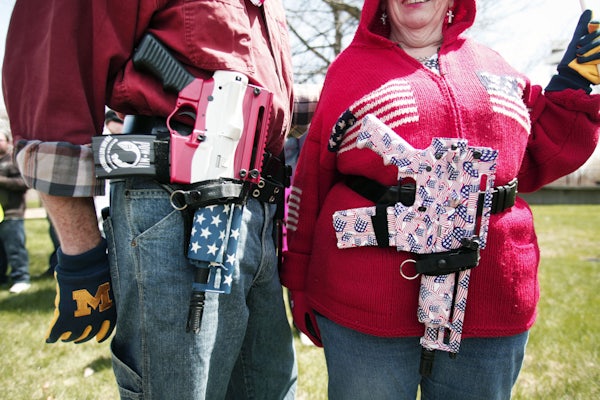 For the first time in over a century, Texans will be free to carry holstered handguns in plain view, a victory for protest groups who were hard at work terrifying Jack in the Box employees only a little while ago.

But not everyone is excited about the new law. #GroceriesNotGuns, a hashtag started by activists presumably concerned about encountering a loaded gun in the cereal aisle, has coincided with the decision of several grocery chains, including H-E-B, Safeway, and Whole Foods, to opt out of open carry.

While houses of worship are not automatically excluded from open carry, they’re free to exempt their properties through the posting of signs and distribution of verbal warnings. And, while some churches (like the Roman Catholic diocese of Lubbock) have confirmed that they’re opting out of open carry, they’ve remained mum on their plans for pastoral direction and the posting of required signs.

With businesses opting out and churches uneasy, Texan police are also bracing for a spike in 911 calls as the law goes into effect. Some citizens are also concerned about how to tell the difference between a good guy lustily handling his holstered gun and, uh, a slightly less good guy doing the same.  As a Dallas city hall employee recently remarked to the Dallas Morning News, “There is no barometer for knowing which person is in their right mind to have a weapon like that.”