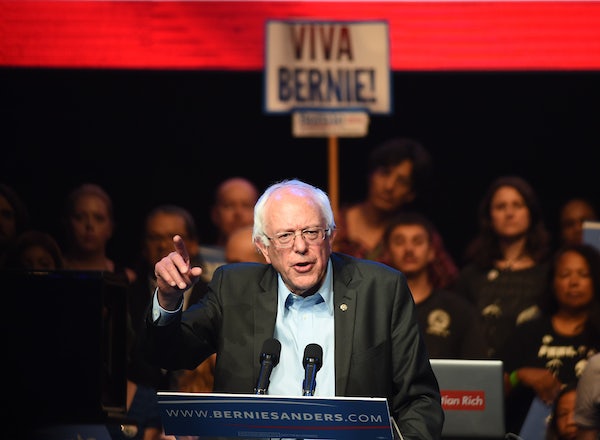 A New York Times article about the political utility of his wife, Jane, featured this irresistible scene:

But Ms. Sanders, 64, could make her husband only so relatable. Asked how much he watched the television that is surrounded by porcelain tchotchkes, she laughed, and her daughter, Carina Driscoll, 41, shouted from the adjacent kitchen.

“We were watching the Super Bowl, and he turned it off at halftime!” Ms. Driscoll said. “What American does that?”

Even Sanders’s own daughter questions his American bona fides!

This won’t go over well with the 49 percent of Americans who are pro football fans, some of whom may already be suspicious of the Vermont senator’s democratic socialism, his adoration of northern European nations, and his honeymoon in the Soviet Union. Sanders, who did bring Double-A baseball to Burlington, has also railed against “colleges and universities that are spending a huge amount of money ... on giant football stadiums,” and once voted to outlaw daily fantasy sports.

Sanders’s aversion to sports is personal. His neighborhood team, the Brooklyn Dodgers, moved to Los Angeles when he was 16. The Guardian reports:

The shock of their departure seems to have informed the Democratic presidential candidate’s early view of the world, so much so that some of his closest friends and confidants wonder if the incident helped inspire his political ideology today.

“I asked him: ‘Did this have a deep impact on you?’ and he said: ‘Of course! I thought the Dodgers belonged to Brooklyn,’” says Richard Sugarman, who is one of the Democratic frontrunner’s closest friends. “It does lay out the question of who owns what.”

The article adds, “Aside from the Super Bowl, which he watches every year with his friend Huck Gutman, he does not pay close attention to professional sports anymore.”

Correction: Half of the Super Bowl.