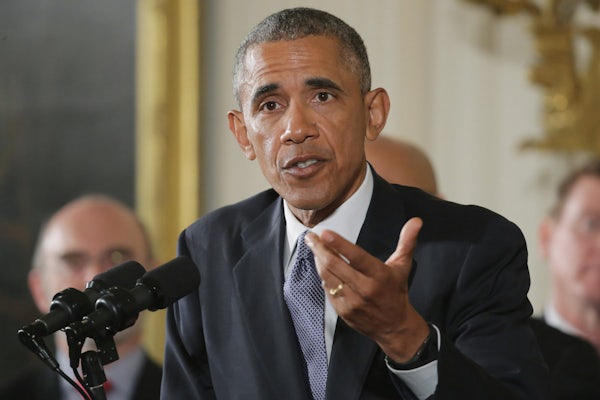 Obama did his best to make his gun control measures sound less scary.

Unveiling his new executive action at the White House on Tuesday, the president adopted a casual, it’s-really-not-a-big-deal tone for most of his speech. He compared gun control to metal detectors and safety restrictions on “cars, food, medicine, even toys.”

“If a child can’t open a bottle of Aspirin,” Obama said, “we should make sure they can’t pull a trigger on a gun.” Taking a page from Nick Kristof, he asked, “If we can find an iPad lost with our phone, why can’t we find a stolen gun?”

The president’s overarching goal was to portray his new gun-control measures as relatively modest steps that any rational adult human would find reasonable. The corollary was that the GOP and NRA’s objections to these kinds of measures are profoundly absurd. “Research, science—those are good things, they work,” he deadpanned, as the audience broke into laughter.

There was some genuine drama—even tears—at the end of the president’s speech. But contrary to some of the angrier speeches he’s given on the issue, Obama approached this one with a lighter touch.