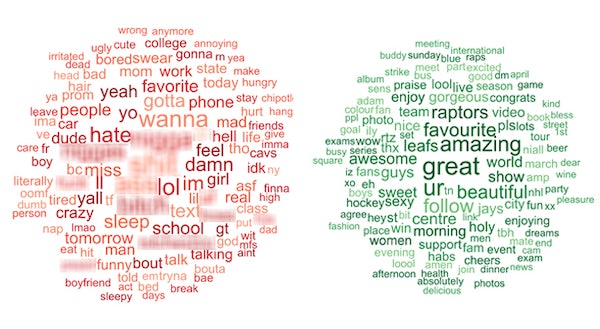 Many moons ago, former New Republic editor Michael Kinsley discovered the most boring headline ever in the pages of the New York Times: “Worthwhile Canadian Initiative.”

It immediately became a long-running joke, spawning a contest to find worthwhile headlines (Canadian or not) that matched or even exceeded its droll vapidity. In the 30 years since, we’ve returned to it time and again, but a new study suggests perhaps we’ve been looking at the wrong medium.

Two PhD candidates at McMaster University are out with a study that finds Canadians are far more polite (read: boring) on Twitter than their American counterparts. The study analyzed three million tweets sent from the Great Lakes region on both sides of the border, and compiled the words used into a searchable database based on politeness. Canadians were far more likely to use words like “amazing,” great,” and “favourite,” while Americans were predisposed towards “fuck, “shit,” and most egregiously, “bae.”