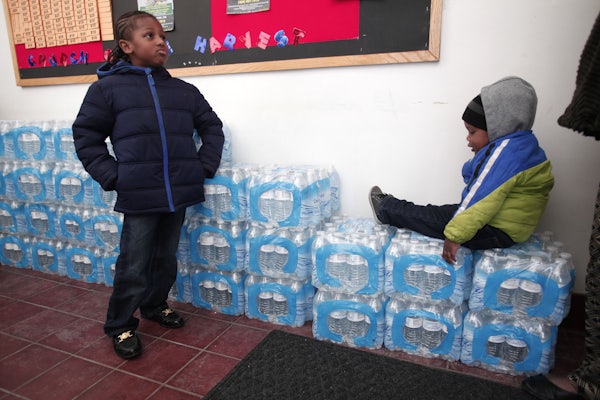 It was a welcome surprise, at the very end of the debate, when Clinton shed light on an ongoing environmental and public health crisis that has received little notice in any of the Democratic or Republican debates.

Asked about what points of difference exist between herself and the other two on stage, Clinton brought up Flint, Michigan’s lead-poisoning—a slow-motion disaster that state and federal officials should have prevented. Governor Rick Snyder, a Republican, allegedly neglected the problem long after he knew about it.

“I spent a lot of time last week being outraged by what’s happening in Flint, Michigan, and I think every single American should be outraged,” she said. “If the kids in a rich suburb of Detroit had been drinking contaminated water [...] there would have been action.”

This disaster hits home exactly why clean water and air—usually labeled as fringe environmental issues—is a deserving political debate. Clinton hit home some of this in her answer, but really, it would have been better to see additional time spent on these concerns. Note that the answer came from Clinton, and not debate moderators, who can’t be trusted to give environmental and climate challenges any serious attention.