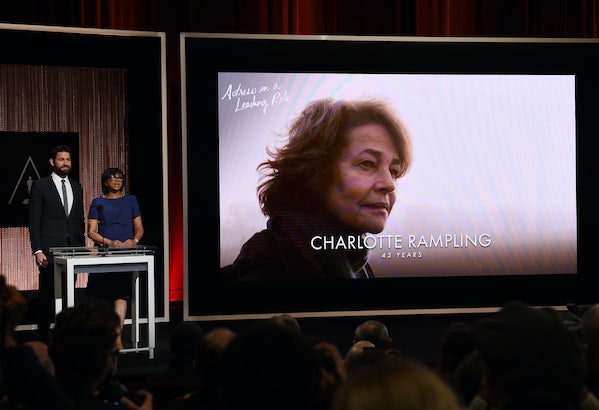 Rampling, who is nominated for Best Actress for her performance in 45 Years, was asked on French radio this morning about the growing controversy over this year’s Oscars, in which no non-white actors were nominated in any of the acting categories. Here, per the Guardian, is what she said:

“Perhaps the black actors did not deserve to make the final list,” she said. .... Asked if the Academy of Motion Picture Arts and Sciences should introduce quotas ... she responded: “Why classify people? These days everyone is more or less accepted ... People will always say: ‘Him, he’s less handsome’; ‘Him, he’s too black’; ‘He is too white’ ... someone will always be saying ‘You are too’ [this or that] ... But do we have to take from this that there should be lots of minorities everywhere?” When the interviewer explains that black members of the film industry feel like a minority, Rampling replies: “No comment.”

If anything that Rampling was asserting was actually, you know, true, #OscarsSoWhite wouldn’t be an issue in the first place. That campaign wouldn’t be necessary if “everyone is more or less accepted.” Nor is its goal to make there be “lots of minorities everywhere”—its goal is to make sure minorities are represented at the world’s largest awards show. Rampling will almost certainly apologize and/or claim she was misquoted but the damage is done and the Oscars are still slowly turning into a disaster for the Academy.