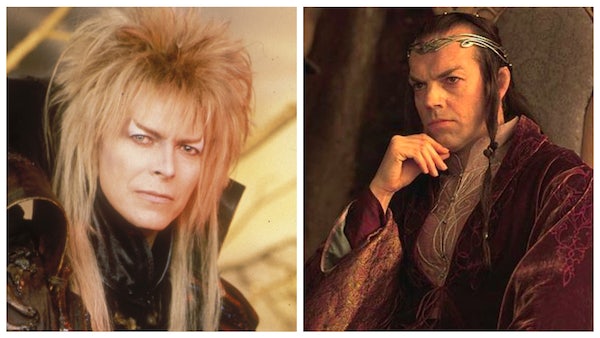 In a better world, David Bowie played Elrond in Peter Jackson’s The Lord of the Rings.

We’ve known that Bowie wanted a part in The Lord of the Rings for years, but, according to a new interview with Dominic Monaghan (who played Merry, the lesser of the two fun hobbits), it seems like he actually tried to get one. Monaghan says he spotted Bowie in a London casting office before filming for The Fellowship of the Ring began:

“I was at the Hubbard’s, which is a pretty notorious casting agency office in London, doing an audition for Lord of the Rings. ... As I was reading a magazine waiting, David Bowie came in and signed his little list and went in. And I’m assuming he read for Gandalf. I can’t think of anything else he would’ve read for. He may have read for something else, but I’m a huge David Bowie fan, and I was lucky enough to know his son now so just seeing him in person was pretty special to me.”

That Bowie was auditioning for Gandalf is new information and also probably wrong—the rumor was always that Bowie wanted to play Elrond, which makes way more sense.

Jackson told EW’s Gillian Flynn (pre-Gone Girl) that he rejected Bowie because “these are famous, famous characters, loved for nearly 50 years. To have a famous, beloved character and a famous star colliding is slightly uncomfortable.” That’s a bit rich, given that he cast the replicating dude from The Matrix in the role of Elrond.