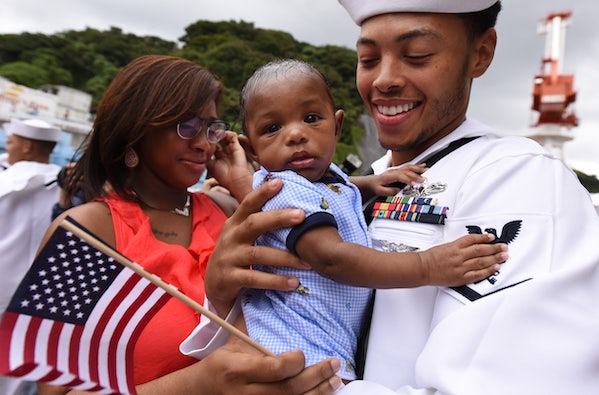 The Pentagon is cutting paid maternity leave in the Navy and Marines in order to give more leave to the Army and Air Force.

Good news for women in the Army and Air Force: Defense Secretary Ash Carter will announce today that paid maternity leave for all female service members will be twelve weeks. This doubles the amount that women in the Army and Air Force previously received, but it’s not such good news for sailors and Marines, who are seeing six weeks cut from their leave. (The Navy made headlines back in July when it announced it would be tripling maternity leave from six to 18 weeks.) Carter will also announce an increase of paid paternity leave from ten to 14 days, plus coverage for active duty service members who want their eggs or sperm frozen. In an effort to make the armed forces a more attractive recruiter, benefits will apply to same-sex couples and couples who are adopting, and hours at military child care facilities will be expanded.

Paid leave advocates have been rallying around the twelve week mark for maternity leave—it’s what all three Democratic presidential candidates want, and what the proposed FAMILY Act calls for. But twelve weeks is only supposed to be a starting point: In the U.K., service women get 26 weeks of fully paid maternity leave. It’s disheartening that an effort to equalize the policies of the different branches has decreased the leave for some, and, although military duty is a special case, it would have been even better to see leave raised to 18 weeks across the board.