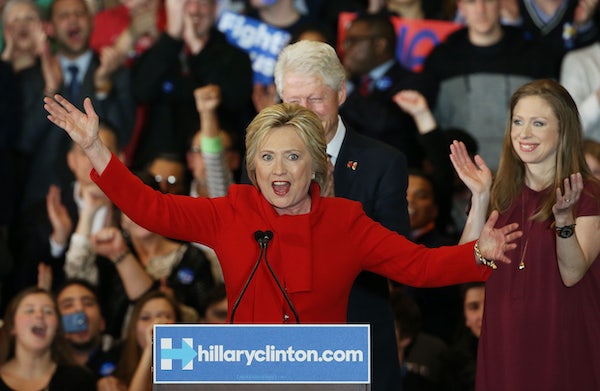 In her post-Iowa speech, Hillary Clinton reaches out to Team Sanders.

Clinton sounded a conciliatory note on what basically amounted to a tie with Bernie Sanders. “It is rare that we have the opportunity we do now to have a real contest of ideas,” she said. “To really think hard about what the Democratic Party stands for and what we want the future to look like.”

Given the closeness of the race, it’s understandable that Clinton didn’t want to come out strong against Sanders. Even though she was able to withstand reportedly high turnout among his supporters, and even though core Sanders fans might be vociferously anti-Clinton, she strove in her speech to convince them that switching over to Team Clinton wouldn’t be such a stretch. “I am a progressive who gets things done for people,” she said, ticking off her positions on climate change, women’s rights, gay rights, the gun control, and student debt. “I am honored to stand in the long line of American reformers.”

The Iowa Caucus wasn’t the coronation some were expecting, but Clinton is still well positioned for the coming weeks. A complete defeat would have been disheartening, but the near-draw indicates better things to come for Clinton in primaries in the more racially diverse states of Nevada and South Carolina.