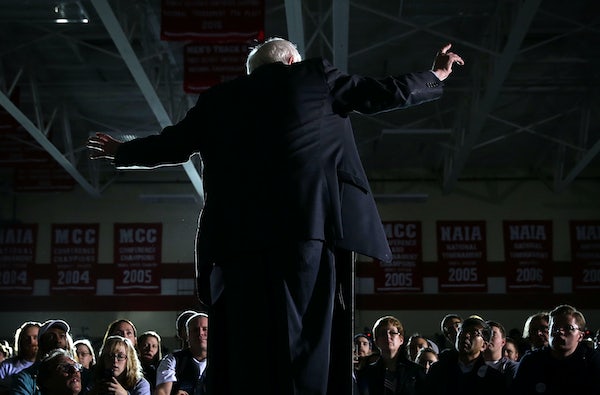 Bernie Sanders rides his “radical idea” to a “virtual tie” in Iowa.

“Nine months ago ... we had no political organization, we had no money, and we had no name recognition,” the Vermont senator said, “and we were taking on the most powerful political machine in America. And tonight, while the results are still unknown, it looks like we are in a virtual tie.” Less than a single percentage point separates him and Hillary Clinton, meaning that, as he noted, “We’ll have about half of the Iowa delegates.”

“We’ve sent a profound message to the political establishment, to the economic establishment, and, by the way, to the media establishment,” Sanders said, adding that, given the crises facing the country, “it is too late for establishment politics.” He pointed out that exhaustion with establishment standards is common not only among progressives, but conservatives and those in between.

But at the end, Sanders chalked his success in Iowa up to frustration with “a rigged economy” in which most wealth has flowed to the top one percent, while Americans work longer hours for lower wages, with little hope for education or affordable healthcare.

“You guys ready for a radical idea?” Bernie asked. “Well, so is America.”