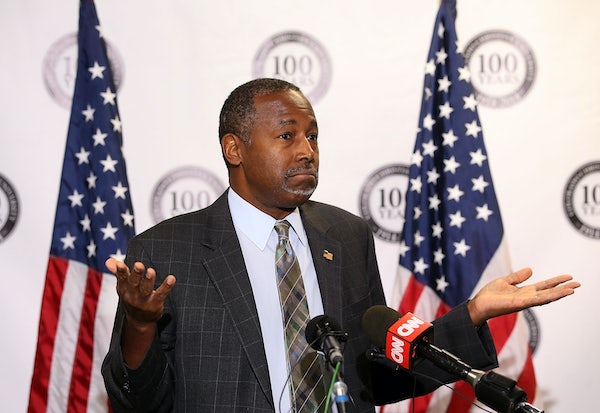 Over the past few months, numerous reports have emerged suggesting that Carson’s campaign staffers are great at enriching themselves and ... not much else. Carson has raised millions over the past year, but most of that money has stayed within the campaign: Carson spends big on marketing and direct mail campaigns, but the firms hired to handle these efforts are often run by people with ties to his campaign. In other words, Carson would pay people twice: once as staffers and a second time as outside help.

This was, as many people pointed out, probably unethical, but also totally unsustainable. And it seems like the bottom has finally fallen out. The Washington Post reports that Team Carson is running out of cash and is cutting 50 staff positions and slashing salaries as a result. The Carson campaign has seen several departures over the past two months: a number of advisers have resigned, citing Carson’s lack of foreign policy expertise (to say the least) and/or the campaign’s mismanagement of funds. Carson’s campaign manager Dean Parker resigned in January after taking heat for paying himself $20,000 a month.

This seems like the middle of the end for Carson—after months of controversies involving his campaign’s spending, he’s finally cutting back. But it’s almost certainly too late. If he doesn’t shock in New Hampshire or South Carolina, he’s cooked.